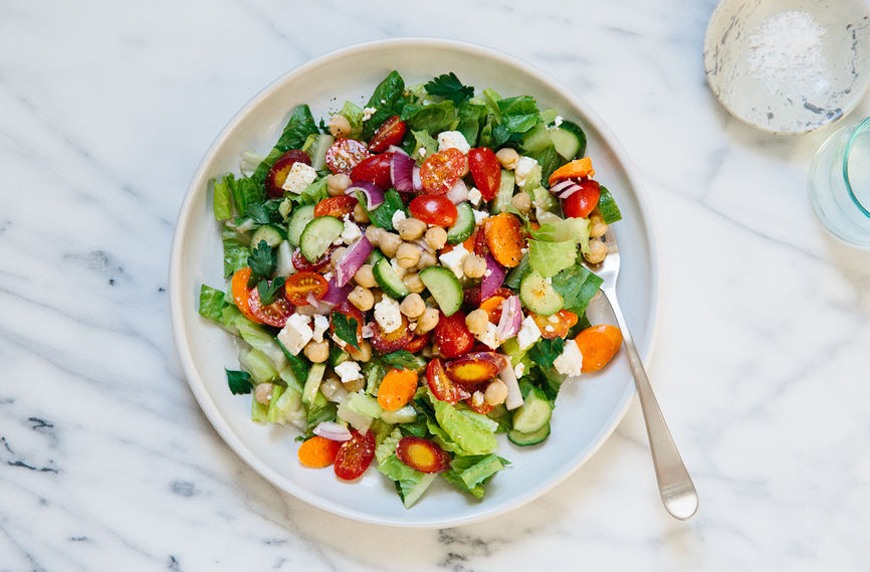 The ketogenic diet may have been the buzziest eating plan in 2018, but is it the healthiest overall? According to U.S. News and World Report, the tried-and-true Mediterranean diet rises to take the top honor.

A panel of health experts examined and ranked 41 popular eating plans, concluding that the Mediterranean diet is the most universally beneficial for long-term health. Further down the list, U.S. News named the DASH diet as the second healthiest, with WW (formerly known as Weight Watchers) as fourth, vegetarian as 11th, vegan as 20th, Paleo as 33rd, and Whole30 and keto tied for 38th.

The eating plan also takes into account more than just food, adds Marisa Moore, RDN. “If you look at the Mediterranean diet pyramid, what’s at the base is actually physical activity and social relationships,” she says. So movement and friendship definitely play a part, too. To quote Gilmore Girls, it’s a lifestyle. What’s not to like here?

Wondering what exactly it looks like to follow this tried-and-true eating plan, and what the Mediterranean diet benefits are? Keep reading for everything you need to know.

The biggest benefit of the Mediterranean diet (besides, you know, wine) is that it’s well-studied—making its buzzed-about benefits truly legit. “The Mediterranean diet has been around for a very, very long time and is one of the eating plans that’s been studied the most,” says Moore. “When the PREDIMED study came out in 2013, it really showed the long-term benefits, and that caused it to really start surging in popularity.” The Cliff Notes version: The study followed 7447 people and found that those who ate a Mediterranean diet had significantly fewer cardiovascular problems than those who didn’t.

Here are eight other major Mediterranean diet benefits that make it well worth trying:

“This is perhaps the biggest known benefit,” Moore says. “The Mediterranean diet has been linked to decreased risk of heart disease, stroke, and early death, all associated with better heart health.” That’s because the diet is high in heart-healthy omega-3s thanks to the seafood, nuts, and olive oil, as well as antioxidants from all those fruits and veggies).

All those healthy fats are good for your brain, too. One study with 1,864 participants found that those who followed the Mediterranean diet were less likely to get Alzheimer’s or experience other types of cognitive decline in old age. In fact, there’s a direct correlation between fish consumption and lowered risk of Alzheimer’s.

3. It can help with depression and anxiety.

There’s a reason why psychiatrist and Well+Good Wellness Council member Drew Ramsey, MD makes a diet rich in vegetables and healthy fats part of his treatment for patients with depression, anxiety, or other mental health issues: The carotenoids in kale, spinach, and eggs has been shown to boost the good bacteria in your gut, and in turn, your mood. One study found that when older adults followed the Mediterranean diet, they were less likely to experience depression.

4. It’s linked to reducing the risk of cancer.

When researchers looked at a combined 27 studies—taking into account over 2 million people—they found that the Med diet is the eating plan best linked to reduced risk of cancer morality, particularly colon cancer, breast cancer, and gastric cancer.

“Because of all the fiber, the Mediterranean diet is helpful in managing fullness,” Moore says. “You feel more satiated with foods higher in fiber, which helps with healthy weight loss and metabolism.” The key: Replacing simple carbohydrates with fibrous fruits, vegetables, legumes, and beans.

6. It has special benefits for post-menopausal women.

Get this: The Mediterranean diet has even been linked to positively impacting bone and muscle mass in post-menopausal women. This was a small study, so more research is needed, but it’s promising given that previous studies have found menopause can reduce women’s bone and muscle mass.

One study found that people who follow the Mediterranean diet had a higher population of good bacteria in their microbiome, compared to those who ate a traditional Western diet. Researchers noted an increase in eating plant-based foods like vegetables, fruits, and legumes upped the good bacteria by 7 percent—not too shabby.

As if all the above benefits aren’t enough, it’s also linked to living a longer life—primarily because of the aforementioned improved heart health. There’s a reason why so many of those “blue zones” are in the Mediterranean!

While Moore says the Mediterranean diet is a eating plan that can be beneficial for everyone, she says people new to the diet should be mindful of mercury since you’re increasing your seafood consumption. She recommends varying your seafood sources and choosing low-mercury options such as shrimp, tuna, salmon, and catfish over swordfish and mackerel.

“I also often see clients trying to make following the diet more difficult than it has to be,” Moore says. But she stresses that you don’t need to do a ton of research to get started, or feel like you have to buy a ton of new cookbooks (although you certainly can, if you need inspiration). “The beauty of the Mediterranean diet is that it’s simple and doesn’t require a lot of speciality ingredients.” Remember, the Mediterranean region isn’t just Greece; you can use flavors from France, Italy, Spain, and Portugal, too. “Because of the inclusion of all these countries, there’s a lot of different ways the dishes can be prepared, varying them with different spices,” she says.

Yet as the world recognizes the benefits of a Mediterranean diet, eating habits within the region from which it hails have shifted. Children in Greece, Italy, and Spain are less healthy than ever, with an obesity rate of more than 40 percent, according to the World Health Organization, in part because they’re eating more processed foods and drinking more soda than previous generations. (Sound familiar?) To fix it, experts say, Mediterranean countries need only to get back to their roots.

If you’re planning to follow the Mediterranean diet, here are a few recipes to get you started: lamb meatball shakshuka and wild halibut avocado and mango ceviche.
Continue Reading…