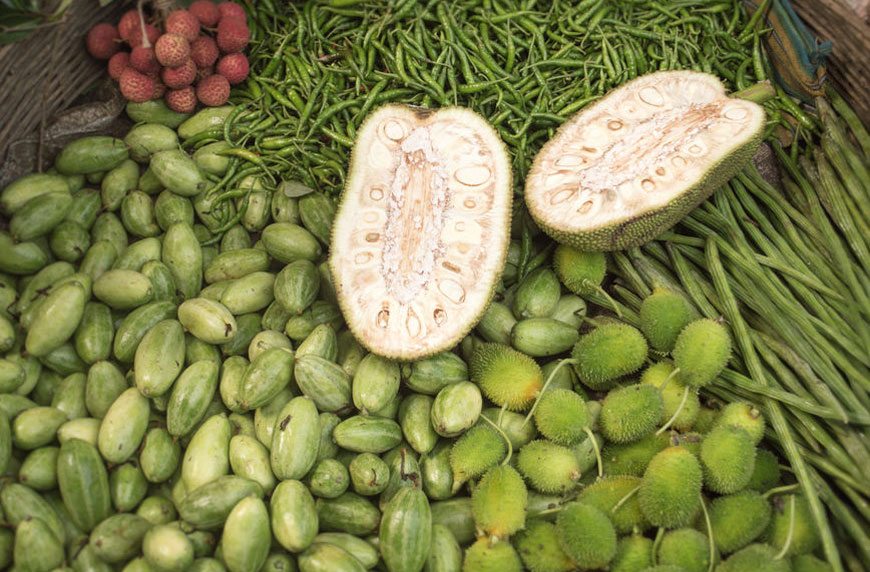 The spiky green exterior of a jackfruit doesn’t exactly scream effective substitute for animal protein. But don’t let its outward appearance fool you; everyone knows it’s what’s on the inside that counts. In recent years, jackfruit recipes have skyrocketed in popularity among those who avoid meat thanks in part to its versatility and good taste. You can use the flesh of a jackfruit to make everything from pulled pork sandwiches bursting flavor to perfectly formed vegan crab cakes. Plus, you can’t beat the fruit’s nutritional profile.

Jackfruit is loaded with vitamin C, vitamin B6, iron, and calcium. It’s also a great way to increase plant-based protein intake, boasting 2.8 grams per cup, which puts it on par with avocados though far from the levels in other common meat replacements—like tofu or tempeh, which contain 20 grams and 31 grams per cup respectively. But for a fruit, it’s kind of a big deal.

Often reaching a staggering 120 pounds, a large jackfruit weighs about the same at five watermelons, but you won’t need a separate shopping cart to get a taste at home. Brands like The Jackfruit Company and Upton’s Naturals offer prepackaged, flavored options (like BBQ and Thai curry ) right at the grocery store. Canned versions are also readily available for you to transform on your own into a delicious meal. Just drain the brine, pull apart the pieces with a fork, and snag one of these recipes to put jackfruit to work.

Here are 10 easy ways to use jackfruit as a meat substitute.

One of the most well-known ways to use jackfruit is in a pulled pork sandwich. Due to its natural shredded texture when cooked, this recipe from It Doesn’t Taste Like Chicken just uses some BBQ sauce to turn it into a convincing replacement for the real deal.

2. Toss it in your soups

This cozy tortilla soup from Minimalist Baker gets its texture from shredded jackfruit that’s been infused with garlic, chipotle peppers for some heat, and vegetable broth. Jackfruit is also the key ingredient in this vegan chili.

3. Use it in summer rolls

Usually, vegan summer rolls are filled with plenty of vegetables. But why not add in a meaty fruit? When you use seasoned jackfruit as with this recipe from Keepin’ It Kind, you’ll have an unbeatable melt-in-your-mouth texture.

4. Use it as a nacho-topper

There’s no better way to celebrate the upcoming Super Bowl than whipping up a plate of nachos loaded with jackfruit. This recipe from Dora Daily seasons them BBQ-style, resulting in a healthier take on the classic. Or, add it into one of your favorite creamy dips, like in this cheesy option from Vegan Yack Attack.

5. Use it to make nuggets

Who needs chicken when you have so many other prime ways to make nuggets? In this recipe from Vegan Richa, jackfruit was dipped into a seasoned batter, rolled in hemp seeds, and baked to crispy perfection.

6. Add it into stir-fries

One simple way to add a meaty texture into your stir-fries is to use jackfruit marinated in soy sauce and toasted sesame oil, like in this recipe from Happy Veggie Kitchen. You can also use it in other Chinese-inspired recipes as well, like by subbing it in for pork in this vegan version of sticky Chinese pork belly from What She Ate.

You don’t need fish or seafood for a quality sushi roll. Just grab the jackfruit. This version from The Vegan Harvest seasons it with tamari, nutritional yeast, and Sriracha for some spice.

8. Turn it into crab cakes

Pulled pork isn’t the only thing you can replicate using jackfruit. It also works wonders in creating vegan crab cakes by seasoning it with some Old Bay, garlic, chives, and cilantro in this recipe from Veganosity.

Jackfruit is about to totally amp up your #TacoTuesdays. This recipe from Hot for Food shreds it and seasons it with ingredients like garlic, chili powder, cumin, and sage, then tops it with some creamy cashew-based adobo sauce.

Ragù is one of the most popular meat-based sauces in the world of Italian cooking, and jackfruit helps to make it vegan. This recipe from The Hungry Warrior creates a sauce with tomato paste, herbs, and spices, served over pappardelle.

Feeling run down? Whip up this vegan bone broth in your Instant Pot. Or, check out three vegan cheese ball recipes that will be the star of the snack table.
Continue Reading…