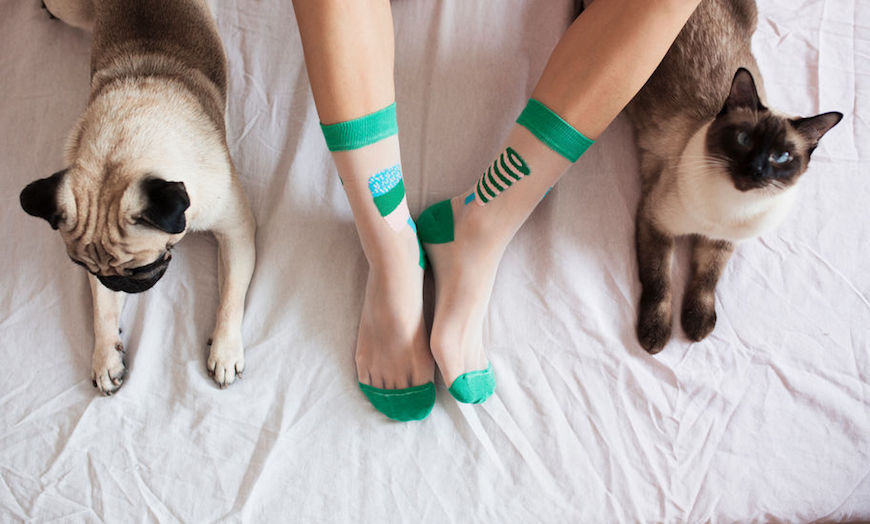 Socks aren’t usually items that elicit passionate declarations. But as someone who wears them every day, year-round, as a visible part of my ensemble, I have very strong opinions about them—specifically, I believe the best socks come from Japan.

How have I come to draw this conclusion? There’s no scientific method for testing style theories; but my determination is due to years of personal market research and product testing—plus, plenty of anecdotal evidence to support my hypothesis in the form of celebrities who are equally obsessed with socks from the island country in East Asia. Probably the most important of which being poet, musician, and eternal cool-girl Patti Smith.

After hearing Smith wax poetic about her “$60 socks from Japan” once in the middle of a performance, I of course, went straight home to Google it. This is how I discovered Japan’s high-end sock market, where a single pair of densely-knit, naturally-dyed socks from the likes of Kapital can cost upwards of $68. Around since 1985, Kapital’s pairs fall decidedly on the high-end of the Japanese sock spectrum—I once received a set as a Christmas gift, from someone who obviously knows me extremely well, and will vouch for their value.

Still, as a millennial and journalist, pairs of socks at that price exceed my budget. Unperturbed by this fact (and already well on my way toward obsession), I began exploring Japan’s less-expensive sock options. Upon further investigation, I’ve come to find that both quality and craftsmanship are consistently superior at every price point.

I found it to be true when I came across a boutique in the West Village carrying socks from the Japanese brand Tabio, which was founded in 1962, is based in Osaka, and counts celebs like Scarlett Johansson and Adele among its fans. Its socks hover right around $20—as do pairs from RoToTo ($25–$35), a company based in the Nara prefecture in central Japan that’s famous for its handknit socks.

I learn, though, that Tabio’s price points are largely because creating a pair of their socks seems almost as grueling as building a spaceship. According to the Tabio team, the artisans who make them go through 15–20 years (!) of training—to be clear, that’s haute-couture-level career development. Plus, they use “low-tech knitting machines, which allow them to make very subtle adjustments to the machines to create the best possible conditions for making socks out of yarns,” explains Wakana Morlan, a representative for the company.

She tells me that the founder, Naomasa Ochi (AKA “the god of socks“), then “wears all of the product samples to check the comfort.” Naomasa is so dedicated to being an apt product tester that “he spends most of his days walking around barefoot. This is because wearing socks leaves the feeling of [them] on his feet and this prevents him from making the correct judgment on new sample socks,” Morlan explains.

Brands like Kapital, RoToTo, and Tabio are still decidedly flying under the radar here in the states—though Tabio is now sold at fashion boutiques like Opening Ceremony and you can find socks from all three companies online at this point. Nothing, though, has done more to elevate Japan’s sock profile than the mainstreaming of major brands like Muji and Uniqlo, which have introduced the rest of the world to the glory that is a good pair of socks from their mother country.

My first pair of Japanese socks were my salvation during a moment of chaos at Uniqlo. I was at the gargantuan multi-level store in SoHo shopping with a friend and began to feel extreme sensory overload. Looking for somewhere that would be a respite from this, I found myself in the corner of the store staring at a wall of socks. They were all the same style just different colors and separated into small square shelves. It was so aesthetically pleasing that it felt like an ASMR experience.

I bought six pairs, and years later, I still find them to be the most dependable and failsafe options in my sock drawer. The Uniqlo socks ($2.90 per pair) are a mixture of mostly cotton and nylon which combined with their thickness ensures that they maintain a level of stiffness that keeps them in good shape. They also have a deodorizing feature that helps keep your feet from smelling rank.

And even Japanese socks that you can pick up at a more affordable price point are somehow just better than their non-Japanese counterparts, in my opinion. And that speaks to the thing that I suspect makes them so covetable—astute attention to even the most seemingly benign details. They always feel supportive and dignified, the opposite of the threadbare and sagging loosies otherwise occupying space in my sock drawer.

Here are all the reasons you should consider taking a trip to Japan yourself and the communal bathing practice to experience while you’re there.
Continue Reading…