Dear therapist, why do I swoon at PDA in rom-coms but judge it (and hate it) on social media? 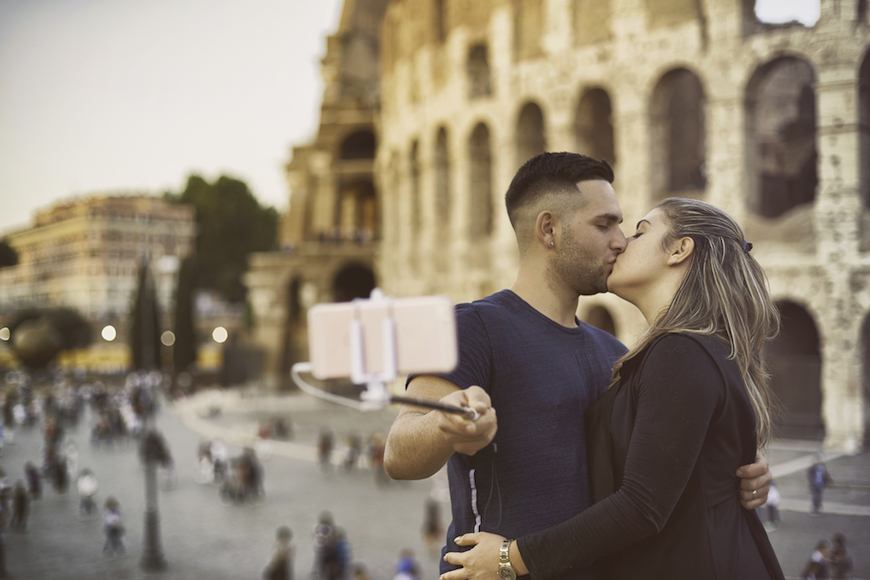 Last week our collective gag reflexes were put to the test when in an unprovoked public social media display of affection, Justin Bieber shared a love poem he wrote for his wife, Hailey. And, uh, let’s just say that Biebs almost certainly has no future as a poet laureate. I mean, the thing starts with a misspelling of “abyss” and snowballs from there. Sure, there are definitely worse things than “publicly honoring” your partner, like global warming or the line at Trader Joe’s after 5 p.m. on a weekday. But when someone gets gooey about their relationship on social media like that, even when other mediums (ahem, rom-coms) celebrate the grand gesture, I still get a rough case of the icks—and I’m not the only eye-roller scrolling the ‘gram.

Cringing at a gushing Instagram poem or at a viral proposal video or at someone who @s their S.O. in their Twitter bio is a common experience, and generally more of a reflection on who we, the bystanders, are rather than who the people in the relationship are. “There can be a very fine line between what we find exciting and romantic, and what we just find intrusive,” says licensed clinical psychologist Aimee Daramus, PsyD. “You might have experienced this with people asking you out, too. Somebody genuinely thinks they‘re being charming, but for you, it‘s too much too fast. So part of it has to do with boundaries. A lot of us might be uncomfortable posting such a private picture or love poem, others might love being publicly celebrated that way.” So, your reaction to the public displays might have something to do with whether or not you’d like to be subject to one yourself.

But see, I don’t consider myself to be an unromantic, bitter wretch. In fact, I am so supportive of other people’s relationships…as long as they’re fictional.

For example, my heart goes haywire when Patrick Verona serenades Kat in 10 Things About You, and I get teary when she recites her titular sonnet. I watch Sixteen Candles on my birthday every year, dying a million deaths when the clearly geriatric Jake Ryan shows up in his red car to pick up 16-year-old Sam Baker. And how silly is it that I swoon when Lloyd Dobler blasts “In Your Eyes” in Say Anything, hoping that the sweet tunes of Peter Gabriel will be just the trick to win back the beautiful Diane Court? The last one is a bad example, since it’s definitely not silly and John Cusack could break into my apartment, steal my laptop, and set fire to my cat and I’d still be into it. But, I digress, and I’m still confused about why I’m into viewing these fictional bouts of PDA but literally can’t even with the real-life ones on my feed.

It’s not the grand public aspect of social media affection that gives me the heebie-jeebies, but the complete lack of a personal aspect for the person receiving it.

Well, the main way rom-com PDA differs from social-media PDA is that with movies, the characters and storylines aren’t real, meaning there’s some inherent distance between film plot and actual goings-on of your own world. Because of the divide, you’re less likely to feel like you’re intruding or being intruded upon when watching, Dr. Daramus says. But also, a level of personal connection can inform your reaction to both fictional and real displays of affection. “Maybe there was just something you connected with about that movie, and you can learn a lot about your beliefs about relationships, your issues, and what you want and don‘t want,” she adds. I do basically just want to date John Cusack, so this is a sound observation.

So if you found Justin Bieber’s extreme PDA relationship moment to be gross, think about what it might say about your own boundary and privacy preferences. “A lot of people will make the mistake of judging, which is a little pointless. By exploring your own reactions to love and sex in media, you can learn a lot about yourself,” Dr. Daramus says. In my case, it’s that I might like the poem delivered to me, and for me—not underneath a photo of me for all the world to see. I’d feel differently, I think, about this Bieber case study had the Instagram been a video of Justin reading the poem to Hailey, for instance. It’s not the grand public aspect of social media affection that gives me the heebie-jeebies, but the complete lack of a personal aspect for the person receiving it.

Obviously the no-judging thing Dr. Daramus recommends is something I can stand to work on, but in the meantime, I can be comfortable with the idea that I get grossed out by social media PDA that doesn’t satisfy my love language. So, note to all future suitors: no Biebering—Doblering only.

Here’s how to deal if you find yourself feeling lonely in a committed relationship. And while we’re at it, here’s a guide to know if you’re creating real intimacy in a relationship or just faking it.