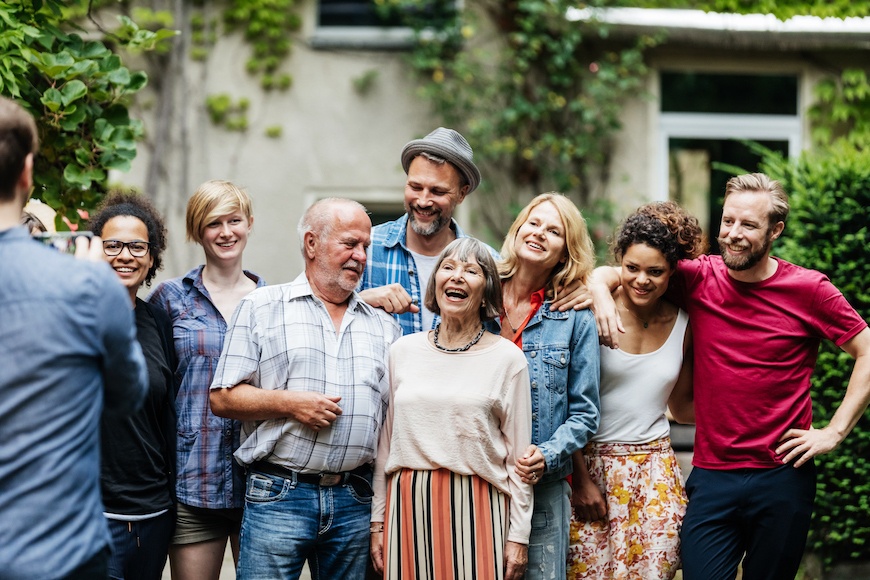 I’m fresh off a trip to Universal Studios in Orlando, and though I drank two butterbeers at the Wizarding World of Harry Potter and loved The Simpsons Ride, my biggest takeaway is this: People need help when it comes to getting the perfect photo. I witnessed so many groups and families smile in front of any random stranger who agreed to snap the shot only to look at the results on their screen with disappointment, too embarrassed to ask for a redo. Yep, deep as we are in this selfie-obsessed era of mass photo-taking, it seems no one knows how to master the ever-so-simple point-and-shoot method. But turns out the secret to getting that Instagram money shot isn’t tap, tap, tapping on your iPhone screen a zillion times, but rather holding down the camera button…like, once.

To get the picture you really want, your best bet is using the Burst Mode function, according to Kiersten Rich of The Blonde Abroad. To use it, simply hold down the photo button on your iPhone with intent. And, big emphasis on “with intent” here, because if you’re me, you’ve probably only used Burst Mode accidentally. When road-testing this picture-taking hack on my own device, it took a minute to even find where my portfolio of photos selects from my Burst were lurking. But eventually I hit “select,” and voilà! There they were, ready to be hand-picked by moi.

And that’s the beauty of the tip: With Burst Mode, you’re gifted a platter of different options from the same scene, which is particularly helpful for when you’re capturing a group photo or testing different poses. Somewhere in the Burst, your winning picture surely exists, and you don’t have to look at 10 consecutive shots and mortifyingly ask, “I’m sorry, can you do a few more?” By simply asking someone to hold down on the photo button when snapping your photo—to capture you at Universal, in all your Avengers T-shirt-wearing glory, or anywhere else—you’ll get a wider variety of lewks, one of which should be A-okay.

By simply asking someone to hold down on the iPhone photo button when snapping your shot, you’ll get a wider variety of lewks, one of which should be A-okay.

“But, Mary Grace, I don’t have a iPhone, can I still use Burst?” To the first issue: LOL, why? I thought we’ve all long surrendered to our Apple overloads. And to the second inquiry, according to my co-worker, yes. On Google Pixel, for example, simply open the camera app, hold down the volume or photo button, and you’re good to go.

The only caveat of using Burst Mode? It takes up a lot of storage on your phone (because, you know, you’re snapping about 42 pictures in about five seconds), and that’ll add up quickly if you keep all the rejects in your photo library. So, don’t do that. Once you find THE shot, send the others back into the universe (when you select the prevailing photo, the iPhone asks if you want to delete the rest of ’em), because you don’t need them now. You’ve already got that perfect photo.

If you’re sick of sponsored content, check out this life hack for hiding annoying Instagram ads. And in other great social media news, Instagram might start hiding likes and doing your anxiety a solid.