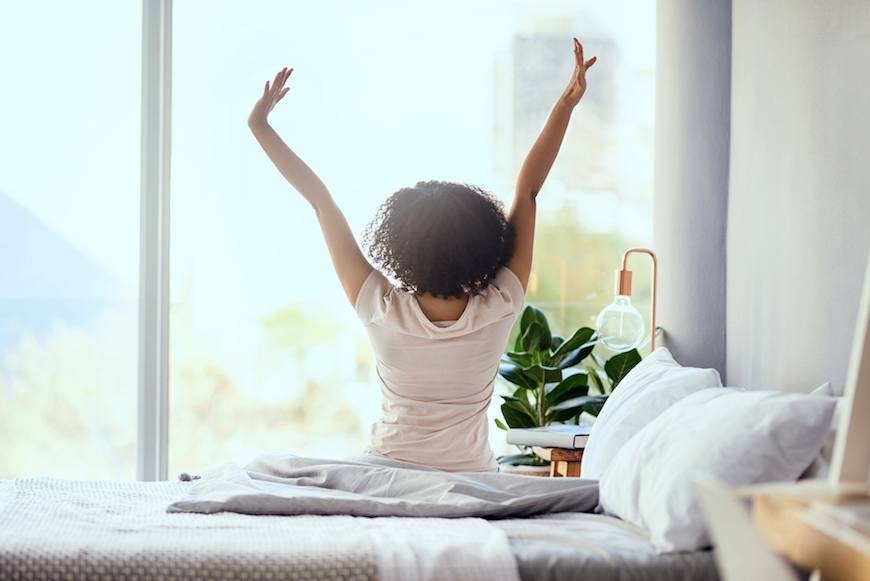 It took me like six years to learn how to be a morning person, and it’s still just a “sometimes” role I play. For instance, I’m a morning person in relation to my musician boyfriend, who, true to the rock and roll credo, enjoys starting his day around noon. I’m also a morning person in relation to my job, because if I’m the first one into the office, I feel much more confident in my move to be among the first to leave. But I am not a natural, effortless morning person, as evidenced by my midnight-or-later bedtime. (And I’m not one of those lucky SOBs with the magic I-don’t-need-much-sleep gene.) I’m awake, but “bright-eyed and bushy-tailed” is a tall order I often can’t fulfill.

However, when I stumbled upon a recent study published in Sleep Medicine contending that even night owls can be early birds, I became alert. With a three-week turnover, the very small study sample group demonstrated an ability to shift their bedtime and wake up two hours earlier by tweaking four lifestyle routines. And while habit-editing requires some commitment, there is serious value to gain from embracing steps to feel more well-rested first thing in the morning.

And sure, no one’s contending that you can’t lead a happy, full, successful life if you’re a night owl—but there is a bit of science supporting that morning-lark lifestyle. You do you, of course, but as someone who’s jonesing to hate her morning alarm exponentially less, I’m here for the following relatively simple lifestyle shifts.

1. Wake up 2 to 3 hours earlier, and maximize outdoor-light exposure in the mornings

Do you usually drag yourself out of bed at 8:30 a.m. but dream to fit in a morning gym class before work? If so, let’s aim for 6:30 a.m. as your new wake-up time. The quicker you can open your windows and let that morning light in, the better.

There’s some evidence linking morning light to wakefulness, since our circadian rhythm is closely tied to light. And this isn’t a summertime-only exercise, for when daylight abounds. Sunrise alarm clocks exist for a reason, folks!

2. Go to bed 2 to 3 hours earlier, and limit light exposure in the evening

Again, light is heavily tied to keeping us awake, which is why you may want to stow your phone TF away at night. Or at least do yourself a favor and switch it to Night Mode, which is the right mode for sleep.

3. Keep your sleep and wake times fixed all days of the week

I know, I know—this one is a little tricky. You might be good to pack it in at 10 p.m. after a busy workday but still feel the need to rage all night on weekends, you boundless ball of energy, you. Unfortunately, this disruption really messes with your slumber habits.

“We typically think Monday-night insomnia is due to anxiety about the work and school week coming up,” sleep expert Dr. Shelby Harris, PsyD previously told Well+Good. “But the bigger culprit is that you shifted your sleep schedule, slept in on Sunday morning, and simply weren’t awake for enough hours during the day on Sunday to be ‘hungry enough’ to fall asleep come Sunday night.” So committing to finding a realistic bedtime that accommodates both work and play helps ensure that your Mondays will suck notably less.

4. Eat when you wake up, eat lunch at the same time each day, and have dinner by 7 p.m.

Essentially you want to front-load your food intake, so sure, go enjoy that 11 a.m. “lunch.” Furthermore, abstaining from late-night tacos is a gift to both your stomach and your sleeping habits. “We want the digestive system to rest and clear out so that it can clean up and reset for the next day,” integrative medicine doctor Marvin Singh, MD previously told Well+Good. “We also want to avoid and reduce the risk of having acid reflux or heartburn and if you fill the tank before you lie on [your] back, you are more likely to have this.”

Got it? Got it. Though the four-step makeover may seem like an overhaul of your whole routine, it’s really just about embracing a sense of consistency. So when it comes to becoming a morning person in less than a month, remember: lights out, dinner early, and pack it in at 10 p.m. every night, rinse, repeat.

…Or at least stick to midnight and don’t get stuck in a one-more-episode trap.

While we’re on the subject, here’s what your bedtime says about you. And if you need extra advice, these early birds share tips on how to get up and running at the crack of dawn.