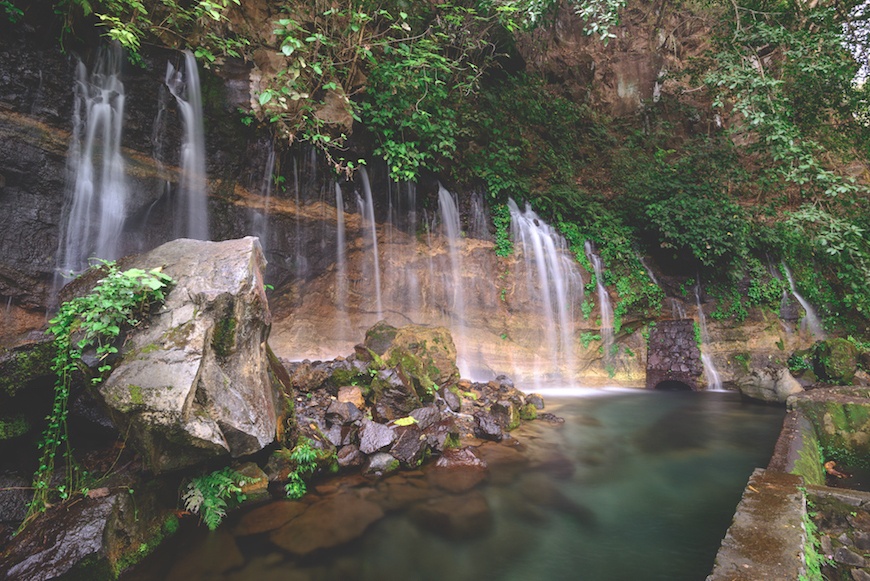 Ruta de las Flores is a gem of an El Salvadorian region that winds through five small colonial towns. At less than two hours from San Salvador and Santa Ana, it’s a popular day-trip destination for the weekend food festival in Juayúa, the center of Ruta de las Flores. But the area offers so much more than what can fit in one day. From waterfall hikes and natural thermal baths to colorful murals and world-renowned coffee in both cafés and coffee plantations, Ruta de las Flores has a sneaky way of keeping game travelers busy for days while also encouraging a slower pace of life.

If you visit between November and February, the flowers will be in bloom, coffee will be harvested, and you’ll see the fincas, or “plantations,” in action. And while Juayúa is the most popular place to stay, the quieter, community-focused vibe of Apaneca resonated better with me. But in this region, where you choose to sleep isn’t where you have to stay: A bus connecting the towns runs frequently, and for $0.40, you can be in the next pueblo in 20 minutes. And it’s good news since there’s no shortage of ways to fill your itinerary.

Chase all the waterfalls

Perhaps the most popular hike in Ruta de las Flores is Seven Waterfalls. Departing from Juayúa, it’s a six-hour adventure that takes you through coffee fincas and tropical forests and provides incredible views of three volcanoes: Izalco, Santa Ana (Ilamatepec) and Cerro Verde. And, oh, yeah, you’ll see (and swim in) lots of waterfalls, too. A tour guide is a must, as the paths are unclear and sometimes you’ll have to rappel down steep inclines; you can find a guide for $15 simply by visiting the tourist center in the main square of Juayúa.

Or just chase one, easier-to-reach waterfall

For easier access to cascading cool water, Los Chorros de la Calera is just a half-hour walk or $2 tuk-tuk ride from the center of Juayúa, and no guide is necessary. These waterfalls are also the last stop on the Seven Waterfalls hike.

With Realtrips El Salvador, an eco-minded tour company, you can get picked you up in Ruta de las Flores ($30 per person for a minimum of two people) and taken to Salto Malacatiupan, which aren’t just waterfalls but are thermal waterfalls. Let the hot water beat down on your sore muscles and even jump off the top into the warm pool below.

Since this waterfall is on a road that branches off the main Ruta de las Flores highway, it sees less foot traffic. But, the promise of the quiet afternoon it’ll afford you as you swim among greenery makes it worth asking your accommodation for transportation information. Trust me.

Sick of waterfalls? Take a guided nature (and pupusa-making) tour

Based in the city of Concepción de Ataco, El Salvatours is a company that offers a full-day, multifaceted experience combining waterfalls, natural medicine, and pupusas (a thick cornmeal flatbread, often stuffed with other ingredients) for $35. After a traditional breakfast in town (the tour price includes three meals), you’ll hop in a truck bed to ride a scenic back road into Parque Nacional El Imposible, where two guides lead you through woods, pointing out medicinal plants along the way. Most of the day is spent along a series of waterfalls, the tops of which you can jump from into pools below—or rappel, depending on your comfort level. The tour caps off with a pupusa-making (and eating) session.

At this authentic pupusería in Apaneca, you can try multiple varieties of the El Salvador’s staple foods. Tasting the traditional frijoles y queso (beans and cheese) pupusa is a must, as is the garlic and the jalapeño (if you like the spice).

Every Saturday and Sunday, a food festival boasting heaping surf-and-turf plates spreads out in the central park of Juayúa. Roam the stalls to choose the combination of meat and seafood that suits your liking for about $6.50 (or a plate of grilled veggies, pupusas, and sides).

This budget-friendly hostel in Apaneca is run out of owner Massimo’s home with his wife, mother, and two children. His endless knowledge of Ruta de las Flores can be a game-changer for your itinerary, and given that he’s also a trained chef, you’d be wise to enjoy pasta night here at least once.

An upscale romantic hotel in Juayúa, this spot is known for its verdant gardens, which people came to visit even before it became a public venue in 2014. The cozy rooms are filled with dark-wood antique furniture and lush beds with cozy, white linens. Bonus: breakfast is included.

Where to drink coffee

At this cozy café in Concepción de Ataco that harvests and roasts its own beans, try the cascara, which is essentially a tea made from the dried skins of the coffee beans. It’s much lighter than coffee, but the taste is surprisingly robust and tart. You can even buy the shells to take home with you for a DIY cup later.

Settled between Ataco and Apaneca, this café and restaurant drips with gorgeous orange and yellow Thunbergia mysorensis that hangs from the overhead trellis (which, in the States, you’d likely only see in a botanic garden or in year-round temperate climates). Tour the on-site coffee operation and take a calming walk along the garden paths.

This highlight of Apaneca is both a shop and café with expertly made coffee. Besides standards like espresso and cappuccino, you can opt for coffee brewed with a Chemex, AeroPress, French press, or stovetop espresso maker to get different flavor profiles. It also sells artisanal goods like textiles (some made with an in-shop loom!), natural body products, and craft jewelry. The store will ship your purchases for you, so you can snag a memento without worrying about space in your suitcase.

Just a five-minute walk down a flora-lined dirt road from the main entrance to Ataco is the coffee finca El Carmen, where, for $6, you can see the entire coffee process from plant to cup. Of course, you get to taste the finished product.