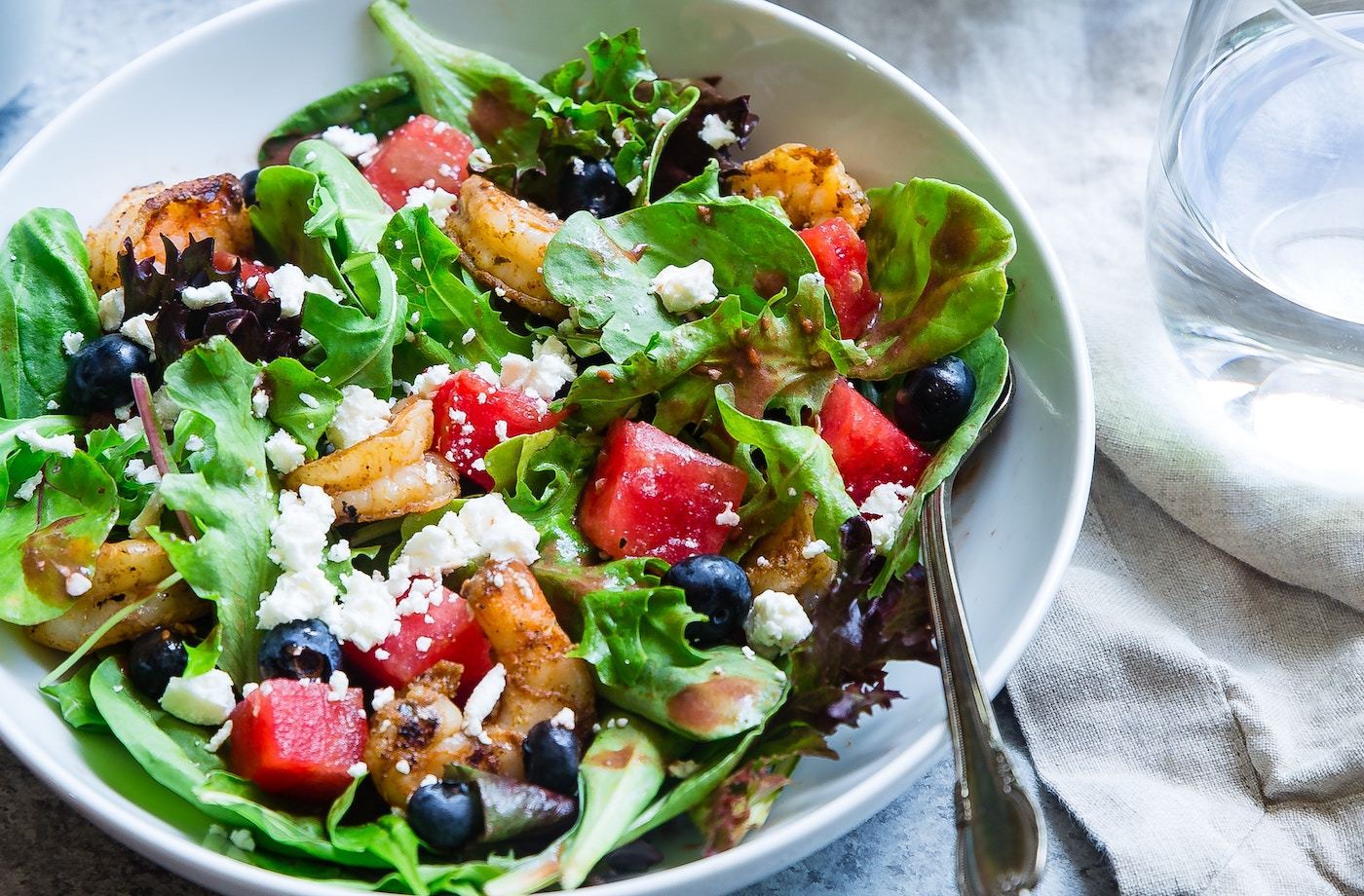 I like to think I have all my healthy ducks in a row—working out, eating well, meditating—but what I’ve always struggled with is my sleep. (Which makes me fit in with the 92 percent of Well+Good readers.) As much as I want to be one of those people who falls asleep immediately and wakes up refreshed, that just isn’t me—and believe me, I’ve tried everything. As a result, I often find myself losing my concentration in the middle of the day, and having several cups of coffee or matcha makes me too jittery to focus.

So, when I learned about the MIND Diet, a specific eating plan designed to help improve and promote cognitive function, I thought it might be the perfect remedy for my sluggishness…especially on days I knew I had multiple things on my plate. Also, let’s be honest: A plan that focuses on my brain and not calories or a number on the scale is definitely something I can get behind. So here’s what happened when I tried the MIND diet for two weeks.

First, what exactly is the MIND Diet?

Developed by nutrition researcher Martha Clare Morris, PhD, and her colleagues at Rush University Medical Center in Chicago, MIND stands for “Mediterranean-DASH Intervention for Neurodegenerative Delay,” and was specifically designed to improve brain health. It’s basically what would happen if the Mediterranean diet and the DASH diet had a super smart baby.

“DASH, Mediterranean, and MIND are all based on a good variety and healthy balance of whole foods, mostly plants, but MIND is different in many ways,” says Maggie Moon, MS, RD, author of The MIND Diet. “It’s simpler than either the DASH or Mediterranean diet, and results are seen with both moderate and excellent compliance.” (Sounds promising!)

The food, while generally pretty similar, has different emphasis areas. Moon says the MIND diet has less fruit than both the Mediterranean and DASH diets, less dairy than DASH, and less fish than the Mediterranean.

What do you eat on the MIND diet?

The MIND diet divides foods into 15 subcategories: 10 brain-healthy food groups, and five “eat less of this” groups. Berries are specifically recommended (not so much the other fruits, though they don’t hurt), and leafy greens are their own category, which means you need to make sure that you’re getting adequate servings of those specifically—normal veggies just won’t do as replacements, although they’re important, too.

In general, this is what a person on the MIND Diet should stock up on:

Below are the foods that someone on the MIND diet should aim to limit in their daily eating:

“What I love most about this diet is the fact that there isn’t the concept of a cheat day,” says Rahul Jandial, MD, PhD, and author of Neurofitness: A Brain Surgeon’s Secrets to Boost Performance and Unleash Creativity. “It’s not like keto, where if you have a doughnut, your entire effort goes to waste. The human body just doesn’t work like that, and it’s more of what kind of fuel you put in your body over a period of years and decades that make a difference.”

What are the benefits associated with the MIND Diet?

The reasoning behind this is each food in the categories have distinct benefits to help brain health: Omega-3s in the fish, antioxidants in the berries, whole-grain carbs for sustained energy, vitamin E in the olive oil, resveratrol in the wine, and the reduction of oxidative stress through leafy greens and beans. Saturated fat has been linked to dementia, which is why all the foods on the “limited” list have been placed as such.

Moon also thinks incorporating the MIND Diet could help those with anxiety and depression (as a part of their existing treatment, not in place of it). “It’s interesting, since the MIND diet is about preventing Alzheimer’s disease and cognitive decline, but the word ‘mind’ means so much more to people,” she says. “It wasn’t studied for impact on mental disorders—however, I have seen some data on Mediterranean diets and reduced risk for depression. There is also research on some of the components, like seafood: A review paper of 26 different studies that included a total of 150,278 people found that eating more fish reduced the risk of depression in both males and females. Leafy greens are a great source of the B-vitamin folate, and having normal levels may lower the risk for depression and improve the response to antidepressants for people who do suffer from depression.”

In terms of pure physical health, Dr. Jandial says that unless you have allergies or are diabetic— in which case you need a specific plan to keep your blood sugar stable at all times—the MIND diet shouldn’t have any adverse effects. Moon agrees, elaborating, “The MIND diet is a generally healthy eating pattern that is appropriate for most people, with perhaps the exception of the daily glass of wine. People don’t need to start drinking alcohol if they don’t already, or if they avoid it for other reasons.”

So, what happened when I tried it?

An eating plan that promises better brain health and where wine is a food group? I was definitely in, and decided I wanted to try it for two weeks to see if it would help my above-mentioned brain fog.

However, Dr. Jandial warned me that two weeks may not be enough time to fully see results, and that studies haven’t been conclusive about the effects of the MIND diet on concentration when it comes to already healthy brains. “It’ll help your brain age slower, and that could result in better concentration, but really, this is something you need to do for decades to really see the benefits,” he elaborates. That’s why the concept of cheat days doesn’t really matter—when you’re doing something for that long, a few slip-ups are invariably going to happen, and studies have shown that even people who moderately stick to the diet report fairly good results.

However, I still thought trying the diet might be worth it, especially if it had any short-term results on the way. Of course, the following can speak only to my personal experience—nutrition is highly individualized, and what’s works for me may not work for everyone.

A typical day looked something like this: Oatmeal with berries for breakfast; a kale salad with walnuts, salmon, quinoa, and avocado for lunch; grilled chicken with veggies and brown rice for dinner. I didn’t have wine every night, but I did have a few glasses when I socialized. For dessert, I usually stuck to dark chocolate. The diet was also fairly easy to follow when I went out to eat, which I appreciated immensely—it’s not that hard to get fish and brown rice at most restaurants, and I could have a burger whenever I wanted.

The first few days had me feeling pretty bloated, to be honest—while I’m generally a pretty healthy eater, the MIND diet calls for more carbs and berries than I’m used to eating. I was so uncomfortable the first few days that I almost gave up. So I reduced the amounts of carbs and fats per meal, which seemed to help, and soon, I was eating enough to keep me satisfied, not stuffed.

After about four days, though, I realized I had a lot more energy to get through my days, even when I hadn’t slept all that well. I felt light and focused after lunch, and I even worked out a little harder on the evenings I chose to do so. My sleep quality, unfortunately, did not change at all, and I found that having more than a glass of wine affected my sleep quality negatively. (Which any health expert would tell you: Well, duh.)

I was mostly impressed at the amount of energy I had after dinner—I’m a night owl anyway, but after eating, I want to veg out. However, eating my shrimp stirfry at night gave me a second wind, and I was able to work on a few articles without looking up from my computer screen for hours… a first! I even stopped consuming as much coffee—two cups a day, as opposed to my normal four. The only thing I missed was cheese in my salad.

Overall, the diet seems to be working really well for me, and it’s definitely something I can see myself sustaining over the long-term…which is precisely the point. Now, let’s just see how my brain feels when I’m 65!

Interested in more healthy eating plans? Here’s what you should know about the Okinawa diet and the “satiating diet.”