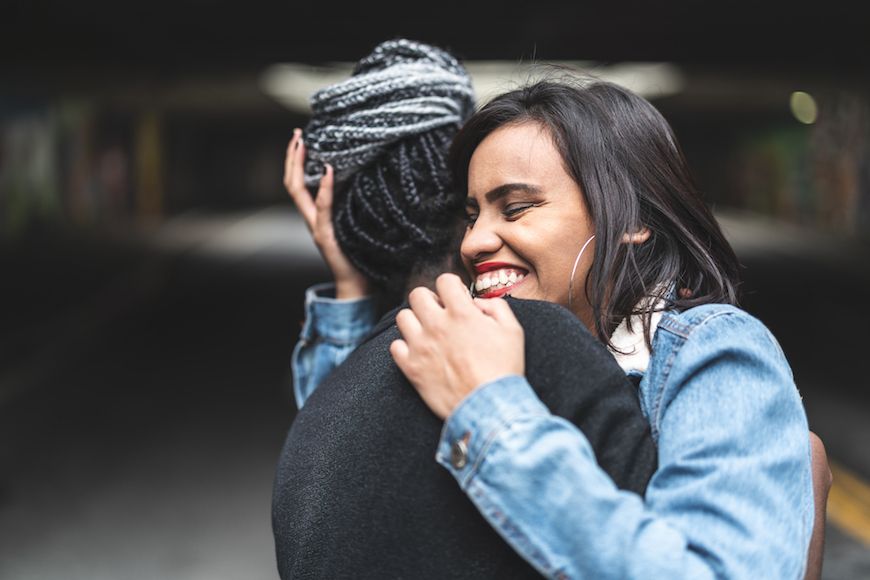 I’ve been anticipating this whole Taylor Swift-Katy Perry reunion for literal years but I still can’t get over how offering a simple plate of cookies and literally extending an olive branch have been effective tools for reigniting a friendship previously plagued by “Bad Blood.”

While having beef with peers, or really anyone in life, isn’t usually intentional, it happens. But whether because you simply miss their presence in your life, realize you’re not angry anymore, or some other life event forces you to take stock in what really matters, you may eventually decide you want to mend fences. Where and how to begin this process, though, is kind of murky—especially given the potential that the other person involved may totally ignore you.

“Sadly, it’s becoming socially acceptable to ‘ghost’ people who you don’t want in your life,” says licensed psychologist Helene Brenner, PhD.  “It’s often rationalized as the ‘only’ option when, in fact, the ghoster is simply afraid of dealing with their own or someone else’s hurt, messy feelings.”

Well, “Band-Aids don’t fix bullet holes,” and all that 2014 noise, and if you bravely want to patch things up with a friend after an extended period of time, this is how you may want to go about it:

1. Take inventory of what happened, and how you feel about the possible outcomes

“Reaching out when there’s been a falling out depends on many factors,” says Dr. Brenner. “How bad was the break? How much is the other person willing to re-open the channel? How much would you like this person back in your life? How easy would it be to re-establish contact on a regular basis?”

These are the questions to ask yourself before you send a haphazard “Hey, what’s up?” text out of nowhere. You may not have all the answers, but sometimes you simply want to reach out to absolve yourself of certain guilt, and that futile effort will just make things more complicated.

“If your attempt at extending an olive branch is likely to result in a ghosting non-response, ask yourself honestly if you can be okay with that.” —psychologist Helene Brenner, PhD

“If your attempt at extending an olive branch is likely to result in a ghosting non-response, ask yourself honestly if you can be okay with that,” Brenner says. And since you’re largely extending that olive branch for yourself—because you want to—things not falling favorably should still be a personal win because at least you tried. So, in essence, if you can recognize that at its core, the desire is one of a personal nature, you may be more able to accept any possible outcome.

2. It’s helps to have a mediator

Let’s say the breakup in question is between two friends with many mutual friends. In this case, there are built in mediators. “Either person can test the waters, talk to a mutual friend, find a way to say ‘I’m sorry for my part in this fight. I want to be friends again. You’re important to me.’ In a situation like this, baked goods can help,” Dr. Brenner says.

Furthermore, getting an uninvolved messenger to deliver a delicious peace offering is really the most polite mode. The “Sorry I slept with your ex-boyfriend” red-velvet cupcakes I once delivered via a third-party were a hit. And that’s because my friend Alec handed them off to his roommate, whose ex-boyfriend I slept with. She took the treats as a genuine apology, thanks in part to the space I offered her to ponder the situation rather than surprising her in person with refined sugar and demanding an immediate verdict on the state of my forgiveness.

The moral of that story is that it you can get someone to help, do it. Also, don’t sleep with your friends’ exes and assume they’ll be cool with it.

Surprise: Your apology doesn’t need to big, flowery, or novel-length. Sure, if you’re an excellent speech-writer, or gift-giver, go for it—but just know that the bigger the gesture, the more room for error with a matter that’s already touchy.

“The best way to re-establish connection is the simplest and most to the point,” says Dr. Brenner. “You want to say that you take responsibility for your part in whatever happened that caused the rift, and that you are sorry for whatever hurt you caused your friend—without adding anything that sounds like an excuse à la, ‘I wouldn’t have done it if you hadn’t done what you did to me.’”

Ideally, if both of you are at fault, your friend will offer a return apology for their part in the issue. But in order for you to come across as completely sincere, you sort of have to stay off the subject of how they were wrong.

“In other words, it has to be a unilateral and unconditional—but simple—apology,” Dr. Brenner adds. “And then you share how much you value their friendship and want to re-establish the connection. In addition, a small but meaningful gift, or a funny apology card, could be helpful, depending on the friend’s personality and the nature of your friendship.”

Feel like your BFF hates you after a weird night out? You may have friendship imposter syndrome. And these expert-approved tips will keep things with your long-distance bestie strong.