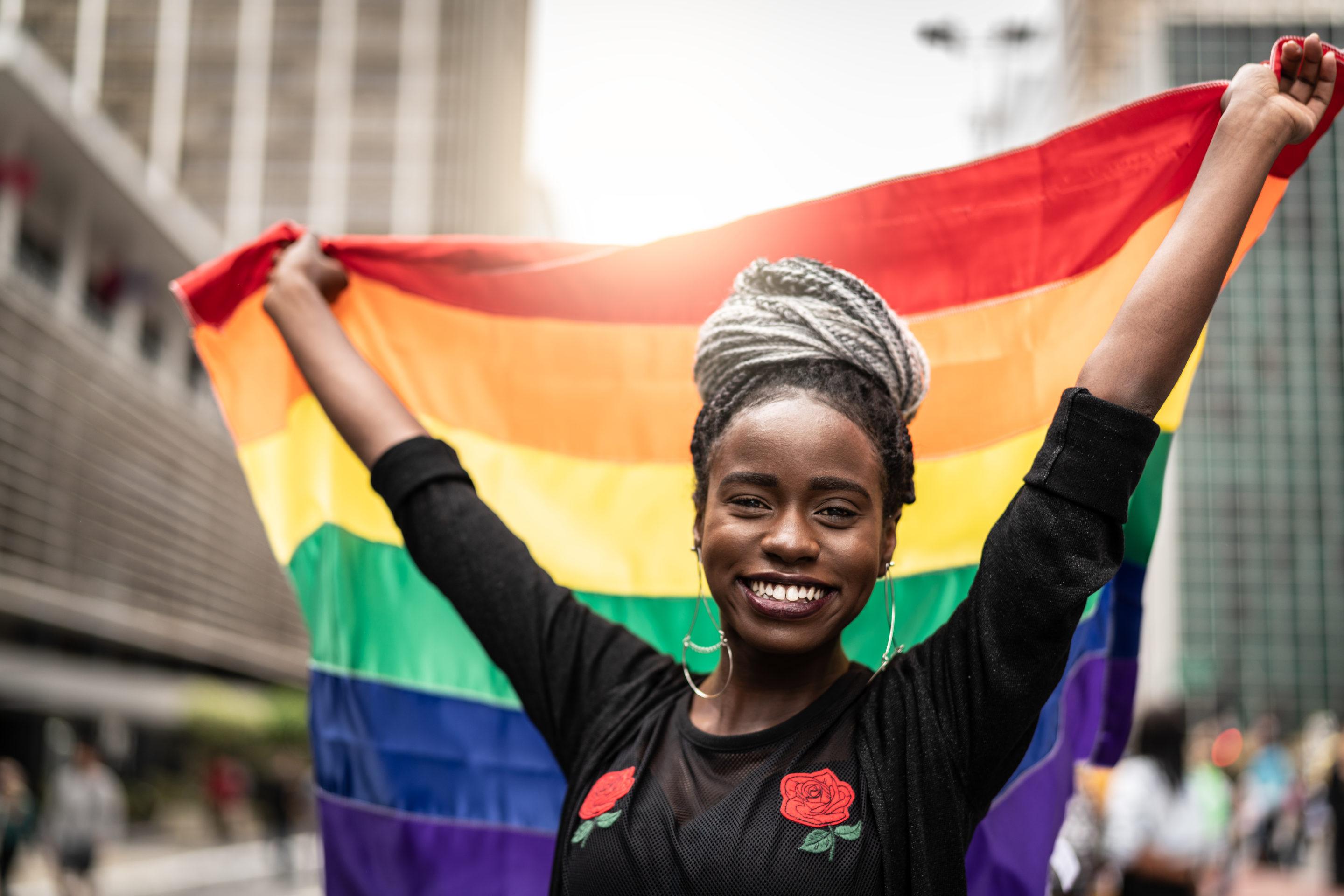 Hold onto your hats, I’m coming in hot with a public service announcement: My queerness doesn’t take a snooze July through May. Despite what Pride marketing might have you believe, I’m queer 24 hours a day, 7 days a week, 52 weeks a year; queer folks exist (and thrive! and are worth celebrating!) 12 months a year. To that point, being an ally is *not* strolling through Ikea with a rainbow tote (*eye roll*), noshing on rainbow Doritos, and goggling at the rainbow-clad mannequins as you window-shop.

Rather, allyship is a verb, a process, continuous action. It’s lifelong work. “An ally is someone who is not from that group who does work for and supports that group. You’re doing the work to educate yourself, be involved in projects by and for, do things for, show-up for that group, and fight for their rights” says bicon (that is,  bisexual icon), Gaby Dunn, co-host of the Just Between Us. “It’s using your privilege to show up for folks who have less privilege.”

To that point, consider the below is your Ultimate Ally™ starter sheet for thoughtful, intentional support of the LGBTQ+ community all year long. This list is by no means exhaustive, but these 6 tips for allies are a good point A.

Simply put: “Exposure matters,” says LGBTQ+ expert and mental-health professional Kryss Shane, MS. I get the impulse to swoon over Kelly Ripa’s trainer, periwinkle snacks, and keto hacks as I scroll (and scroll, and scroll). But, consider the following: the images around us create our worldview. (This photo of a 2-year-old seeing drag queens for the first time is all the heartwarming proof you need.)

Ask yourself: Do I only follow straight-identified, able-bodied, white, cisgender posters? How long would I have to scroll before seeing a queer person on on my screen? Am I seeing/witnessing/reading the voices of LGBTQ+ people on my timelines every single day?

Curating your instagram and twitter feeds so that you’re also seeing and reading the thoughts, opinions, experiences, and concerns of folks with a different sexual orientation as you is an important part of being an ally.

Better yet: post our posts on your story, retweet our tweets (why not start with this one?), elevate our voices. “A huge part of being an LGBTQ+ ally is uplifting the voices of queer people. Retweeting queer people, hearing them out, and letting them speak,” says Dunn. Put that rainbow emoji flag everywhere.

Introduce yourself with your pronouns

You can’t tell someone’s gender just by looking at them. If the nuance of gender identity and idea of gender pronouns are new to you, here’s the quick and dirty: like most things (flexibility, sunscreen, emotional availability), gender exists on a spectrum. Rather, while some people fit neatly into the categories of “cisgender man” and “cisgender woman,” others exist outside of the gender binary. Some of these people may identify as trans, gender-fluid, bigender, agender, genderqueer, or non-binary (for frame of reference, Tinder offers 37+ different gender-identity options!). Some people use she/her/hers or he/him/his pronouns, and others opt for gender-neutral pronouns like ze/hir/hirs, ve/ver/vers, or they/them/theirs. (Miley Cyrus, Amandla Stenberg, Nico Tortorella, and Bethany C. Meyers for instance, all use they/them/theirs pronouns). “You can’t just assume!,” says Shane.

When allies introduce themselves with their pronouns, it helps to normalize the practice. “It is also sometimes a conversation starter to those with no experience of pronoun considerations, which shares awareness, which is an extra opportunity for educating and advocating for the community,” says Shane.

Shane suggests trying on the following phrases for size: “Hi I’m Gabriella, and I use she/her/hers pronouns,” or “I use she/her pronouns, what pronouns do you use?”

Another option? Add your pronouns to your email signature. “It says to the LGBTQ+ community that you are an ally, that you are someone who will receive correction well if you’ve been using the wrong pronouns for them,” says gender-diversity advocate Lee Airton, PhD, author of Gender: Your Guide. “When I see or hear someone signposting, I know that sharing my own pronouns with them will likely go smoothly. It may seem small, but these small, everyday changes trickle down.” Sounds small, but it makes a big difference.

Many companies release a rainbowified (it’s a word) version of their products during Pride, or nod at the queer community by making disembodied hand-holding paraphernalia (I know you’ve seen those T-shirts). Yet most of these companies donate zero, zip, zilch, nada—not even 1 percent of the profits—to LGBTQ+ organizations.

Before purchasing something rainbow-washed, yield. Consider why you’re purchasing it. Are you trying to signal that you’re an ally? Is this your attempt at investing in the LGBTQ+ community? There’s nothing wrong with buying and rocking rainbow wear (I’ll admit I’ve been eyeing these campy rainbow sandals by Ugg), but to *actually* show support and  invest in the community, there are better, more direct ways.

Shop at LGBTQ+ owned businesses. Shane suggests checking out the directory of verified by the National LGBT Chamber of Commerce. Even more directly: “Tip generously and search for LGBTQ+ people, stories, and programming via fundraising sites like Gofundme, Kiva, and Patreon,” says Shane. This way you’ll know exactly where your money is going, and who you’re supporting.

Hire queer people, and help make your work place a place people can come out

Queer hiring and inclusion in the workplace needs to be the standard. If you’re in a position of power at work: hire queer and LGBTQ+ people! Then, compensate them fairly!

And, if you’re in a position of power, and there are no out LGBTQ+ people at your place of work, ask yourself why. Is it because you don’t have an anti-discrimination policy in place? What could you be doing to make the office culture more inclusive? (This guide on making your work place LGBTQ+ friendly has some good tips.)

Don’t out people, ever

Don’t. Ever. Out. LGBTQ+. People. Not at work, not to your friends, not strangers, not ever. “Outing someone can have serious consequences,” Shane previously explained. “An LGBT+ identity as an adult can result in being open to discrimination and violence, as well as to losing one’s job and/or their housing, and/or their ability to adopt a child.”

That means don’t assume that because you know someone’s sexual or gender identity, that everyone knows. That’s our story to tell, not yours.

Listen to music, watch TV shows, and read books by and about queer folks

Two more more tips? Don’t ask lesbians if they scissor. And try to learn more about all sexualities on the LGBTQ+ spectrum. This piece on asexuality is a great place to start.