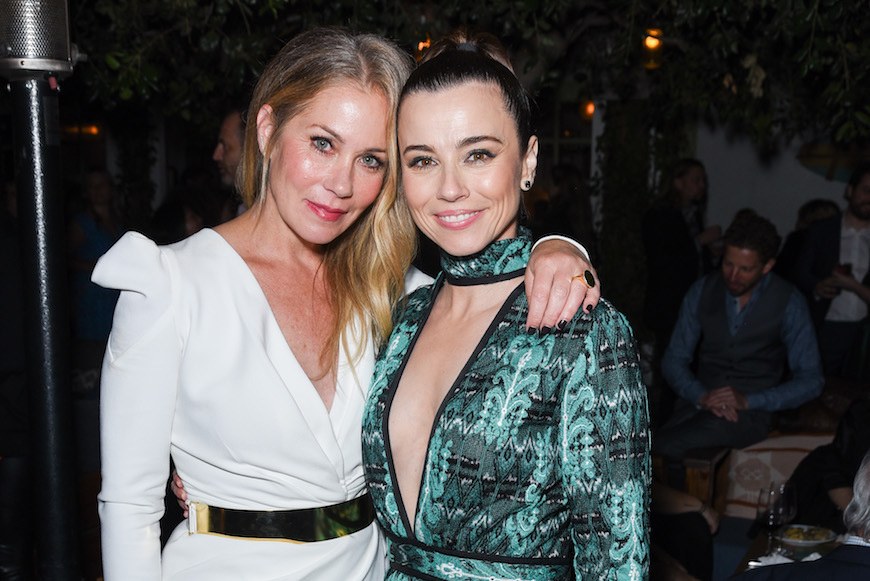 I’d seen the previews for Dead to Me while mindlessly scrolling through Netflix, looking for something to watch. But it wasn’t until my sister recommended it that I turned it on. I was immediately hooked, and proceeded to binge the entire first season over a single weekend. Thanks for the rec, Maggie (my sister is a Gemini so I have to give her credit for this or I will never hear the end of it). Anyway, the show follows Judy and Jen, played by Linda Cardellini and Christina Applegate, respectively, who meet each other at a grief support group and become fast friends who bond over their stories. Knowing that from a few minutes in, I wasn’t surprised when the plot skewed dark, navigating heavy topics like grief and death. Perhaps more surprising, then, was that I often found myself laughing hysterically at scenes.

“This show, we call it a traumedy, because there’s so much traumatic stuff that happens, and then there’s humor to alleviate that tension and stress,” Cardellini said in an interview with the New York Times. That term is similar in vein to a genre that’s long-existed in literature called tragicomedy, which refers to novels and plays that blend—you guessed it—elements of tragedy and comedy. Infusing comedies into tragedy and vice versa has been an effective storytelling device for a long time. While tragicomedies aren’t identical to traumedies (tragedy isn’t a required component for trauma, for one), given the state of the world and how pervasive the experience of trauma seems to be right now, the rise of this type of content not only seems apt, but inevitable.

Fleabag is another example of a traumedy, following a woman navigating life after losing her best friend and business partner, and the BBC show is so popular that women are copying the main character’s signature shag haircut, and a jumpsuit that she wore in an episode sold out in a day. And One Mississippi, a semi-autobiographical Amazon original traumedy by Tig Notaro, deals with death and grief and illness but is also laugh-out-loud funny. These shows explore what it’s like to live through and with trauma, and also manage to find humor in painful circumstances. They’re like real-life fables offering nuggets of wisdom for surviving and thriving in today’s world, which can often feel like a minefield trauma catalysts.

Traumedies explore what it’s like to live through and with trauma, and also manage to find humor in painful circumstances. They’re like real-life fables offering nuggets of wisdom for surviving and thriving in today’s world.

“Humor is one of the most sophisticated of the mind’s defense mechanisms,” psychiatrist Gail Saltz, MD, tells me. “Humor allows us to process distressing information while titrating how much we truly take in at any one moment, thereby helping us modulate how anxious it makes us.” In other words, laughter can function as a controlled outlet for anxiety and post-traumatic feelings. And while certain shows that can be classified as traumedies certainly existed before 2016, that was the year when seeds of the now-clear trend were planted. Fleabag, Atlanta, One Mississippi, Better Things, and Flaked all premiered in 2016. You know what else happened in 2016? Yep, the general election that caused many of us to experience increased anxiety, in addition to Brexit, which was also stress-inducing for many.

The trend has only gained steam because, hey, the general vibe of the world is still really-freaking-anxious, and there’s a lot of tragedy, which can beget feelings of trauma, in the news. “Plot lines about tragedy—which plenty of people are aware of or experience in real life—allows us to replay and rework the story of tragedy, to experience tragedy without it being our own,” Dr. Saltz says. “This kind of show is a way to participate, but at the same time, stay removed and protected.”

It makes sense, then, that part of the reason so many tune in to these dark, dark comedies is because they provide an outlet for feeling trauma while also not directly experiencing it. And cutting that trauma with humor, when done skillfully, doesn’t take away from the traumatic experiences but rather highlights the duality of the world in which we live and coping mechanisms we’re essentially forced to adopt. I’d say it’s not event funny how true all of this rings, but, well, it just is. That’s why traumedy shows are the relatable, ironically comforting genre of entertainment the binge-watchers of the world can’t get enough of right now.

Here, a psychotherapist shares how to deal with secondary trauma when terrible things are happening in the world. And here’s everything you need to know about EMDR and its use as a mental-health treatment.