Here’s how to eat healthy at Denny’s, according to a registered dietitian 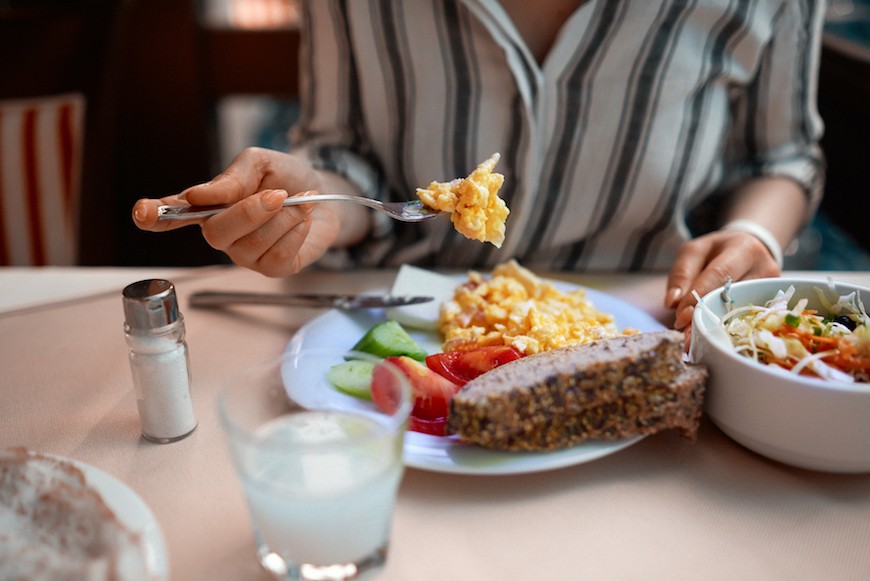 You could be stranded in a town you’ve never been to before, starving at 1 a.m. and you can still count on Denny’s to come through. The open 24/7 diner has a special place in many hearts, from up-all-night college students to grandparents partial to an early-bird special. But where do healthy-minded eaters fit in?

“Overall, Denny’s does have good healthy options, although you have to be a bit clever if you’re vegan,” says Jenna Gorham, RD.  (Phew.) “A lot of their meals are high in sodium, so that something to be aware of,” she adds. To make things easier, Gorham shares the best menu picks if you’re vegan or vegetarian, ketogenic, or on a gluten-free eating plan. Even if you don’t follow a specific diet and simply have the goal to eat healthfully overall, you can still apply her tips to your life.

What an RD says: Denny’s doesn’t have any meals on the menu that are entirely vegan, but Gorham figured out a smart workaround. “You can order the sizzlin’ skillet or veggie omelette and just ask for no eggs,” she says. That way, you’re still getting lots of nutrient-dense veggies. For vegetarians who eat eggs, her picks are the same, with the eggs, which gives good protein.

Order tweaks: Vegans will obviously want to order either of the above without eggs—in which case, Gorham suggests ordering an English muffin on the side so you actually leave satiated.

Side-dish recommendations: If you eat dairy, Gorham says the yogurt and seasonal fruit are great picks for protein and fiber, and adds they could actually be paired together for a small breakfast. If you want something that’s not as sweet, Gorham says even the mashed potatoes are a good pick—unless you’re concerned about your sodium levels. (It also contains dairy, so vegans should avoid it.) In that case, go for one of her other side recs.

What an RD says: You knew there’d be an egg dish among her picks, right? “I noticed Denny’s tends to focus on egg whites rather than the whole egg, so when you order, you just want to make sure you’re getting the whole egg since the yolks are full of healthy fats,” Gorham says. If you’re at Denny’s for dinner, Gorham’s top pick is the salmon (minus the rice), though she says the sirloin steak is also keto-approved—minus the potatoes. “The salmon is a bit lower in calories and sodium, but both meals have good protein and fiber,” she says.

Order tweaks: If you’re ordering the veggie omelette, Gorham says the English muffin isn’t keto-compliant (though the turkey bacon is), and if you’re going for the salmon, again, the grains are a no.

Side-dish recommendations: “If you want a side to the salmon because you’re not getting the grains, the garden green side salad is small enough and low-carb enough to be a good choice,” Gorham says. (Just omit the croutons.)

What an RD says: Different eating plan, same menu picks. Gorham loves both the veggie omelette and the salmon for their protein and fiber content. “Denny’s does have gluten-free English muffins, so you don’t have to omit that as part of your breakfast,” she adds. (Just be sure to ask for one up front!) And unlike with keto, the grains that come with the salmon work for this eating plan.

Side-dish recommendations: If you’re hitting up Denny’s for breakfast food, the yogurt and fruit get Gorham’s seal of approval. For dinner, the garden green salad is a good choice (just skip the croutons).

If you’re looking for more ways to eat healthy while eating out, here’s what to order at The Cheesecake Factory and Olive Garden.