Is it okay, psychologically and otherwise, to have sex in the same room as your pet? 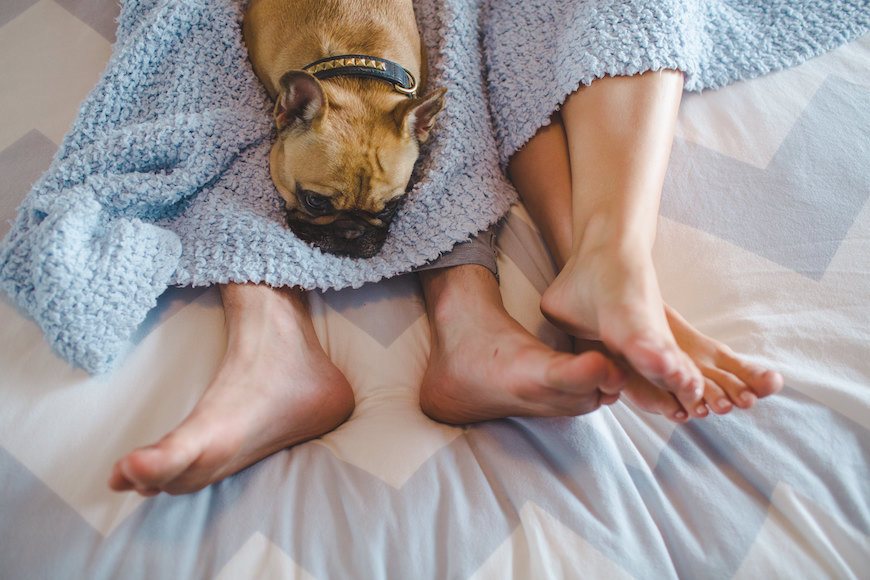 Though it would be just swell to own an adorable corgi named Waffles, there are several reasons why I elect not to have a dog right now. Namely, I am not even 1 percent responsible enough for that. I can barely find the time to take care of myself, let alone set aside some Kibbles ‘n Bits, reserve a dog walker if I want to be out past 6 p.m., take necessary precautions to ensure the pup isn’t in the room (and, thus, irreparably scarred) every time I want to have sex, or, if the pet does walk in on it, make sure they don’t try to get in on the action.

Oh, don’t act like this hasn’t happened to you, pet owners. Every friend of mine who boldly shares a studio or one-bedroom apartment with their fur baby has at least one story about how it walked in on sex. What I’ve never learned, though, is intel on whether they kept going at it. Which brings up an interesting question: Is it…bad, or unadvisable for any reason if you have sex in the same room as your pet?

And if that sounds like an ominous warning sign, it’s because it kind of is: “Dogs can form strong bonds with humans that may cause them to become territorial when another person is added into the mix; jealous behavior is often exhibited by dogs when their owner so much as hugs another person,” she continues.

Depending on your pet’s personality, they might interpret sex as a reason to jump into bed with you to join the fun or even to”protect” you. “[Pets] may perceive the activity as an attack on their owner, or may just feel left out of what they think is play time,” Dr. Barrack says.

While keeping your love life and pet life separate is a great healthy boundary to prioritize, implementing the process is a little trickier—especially if you live in a small space. Luckily Vanessa Marin, LMFT, sex therapist, and parent to two pugs, has a few suggestions:

“You can put your pet in their crate or pen,” Marin says. “Another option is to close a pet in the bathroom. You can even buy a baby gate to close off a bathroom or kitchen to create a little more privacy.” Also, treats help!

But what if once you’ve established your boundary, your companion starts scratching at the door or whimpering? First of all, rude. Second of all, drown them out. “I definitely recommend cranking up the music to distract yourselves from your pet’s sounds, and to distract your pet from your sounds,” Marin says. “Pets can often get distressed by loud moans. If you don’t want your pet jumping up on your bed to make sure you’re okay, try to keep moans to a minimum.”

Ultimately if you decide to have furry friends, they will inevitably interrupt your sex life at some point—and having a sense of humor about that reality is key. “My husband and I were trying to be intimate, but we could practically hear the light bulbs going off in the dogs’ heads as they realized they could scratch our bedroom door open,” Marin says. “We just had a good laugh about it together, and took a break to move a chair over to block the door.”

So if Fido or Waffles or whomever else has ever walked in on sex, it’s not the end of the world. And having someone to laugh with as you navigate the romantic hiccup is definitely helpful. But, yeah, it’s still a prominent reason why I won’t get a pet for a long, long time.

On reason to keep a dog around (but, uh, not during sex)? They can extend your lifetime. And if you want to get them on the CBD trend (really!) here’s what you need to know first.