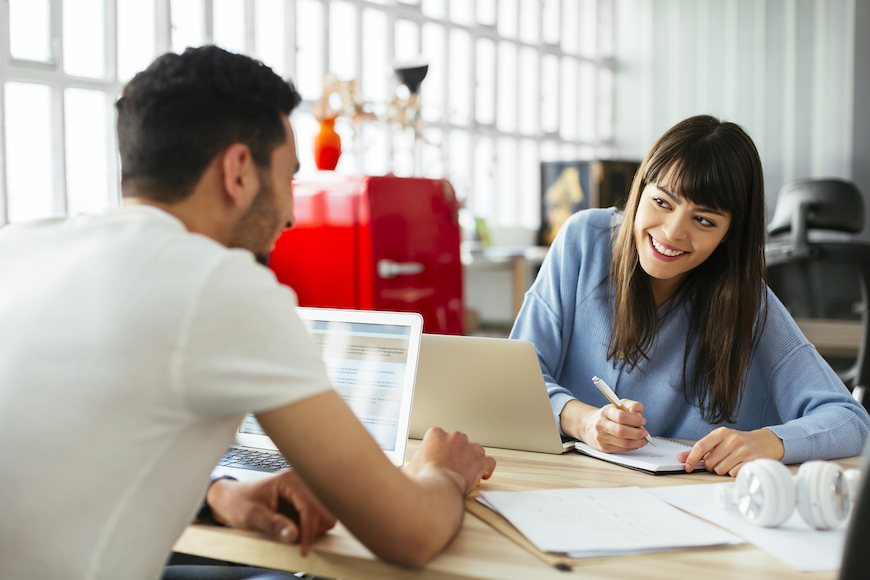 Many years ago, I fell for a colleague. I felt weird and strangely even bad about it, but my mom, who’d worked in human resources (HR) for 35 years, assured me that dating a coworker is common, as many people meet a significant other in the office. Still, things didn’t go well for me when my relationship was discovered rather than revealed, and I felt, in retrospect, that I’d navigated the situation poorly. Ultimately, the whole thing was traumatizing, TBH.

A decade later, in a post-#MeToo world, intra-office relationships seem like trickier territory than ever. That issues of sexual harassment are moving closer and closer toward zero tolerance rather than a pretty normalized event to simply endure is a great thing—please don’t get me wrong—but for the appropriate, happy, consensual, unions, the inner-office spotlight can feel negative and taboo.

So what, exactly, are the modern guidelines to follow for dating a coworker? Should your office crush remain just that until one of you leaves the company, or can you responsibly engage in a workplace romance without it blowing your career? Because we don’t live in the Mad Men world of flagrant office flings anymore (*prayer emoji*), but the newest rules feel largely undefined. Experts weigh in below.

Don’t: date someone below or above you on the hierarchy

First, check your employee handbook to see what’s laid out there in terms of dos and don’ts. While it’s rare for companies to forbid relationships altogether, guidelines may be in place to restrict certain pairings. “Typically an organization will require employees to disclose a relationship if a potential conflict exists relating to reporting structure,” says HR expert Ed Krow. In other words, if you’re dating your boss or your direct report, trying to keep things under wraps could spell trouble.

“Managers need to understand that they can be held personally liable for harassment if/when the relationship goes bad and one party makes a claim.” —Ed Krow, HR expert

“It creates a major conflict of interest,” says Jessica Davidoff, CEO of STATE Bags. “If you’re head over heels about your superior or your junior and the feeling is mutual, you might want to talk to HR about potentially reassigning one of you to a different manager if you really wanted to pursue the relationship.” But Krow’s stance is that it’s “never okay” to date someone lower than you on the corporate ladder, whether or not they report to you, and regardless of whether your company has written rules about the situation. “Too many pitfalls are present,” he says. “Managers need to understand that they can be held personally liable for harassment if/when the relationship goes bad and one party makes a claim.”

Do: Disclose serious relationships to the powers that be

However, if you’re dating a coworker who works within your department, you’ll just want to disclose this to your direct boss, Davidoff tells me. As for when to do so, Krow admits it’s tough to say definitively. “Going on a date or two does not typically signify a relationship,” he says. “At the point the relationship gets ‘serious’ (as in, intimate or exclusive), it is time to notify the proper person.”

If you work at a large company, and your paramour’s department doesn’t touch yours, Davidoff says it’s not as imperative to disclose (unless otherwise instructed by your employee handbook). If things get very serious, however, she recommends telling HR just to cover your bases.

Don’t: Forget to consider your other coworkers

Once you’ve disclosed your relationship to the appropriate parties, it’s time to decide whether or not to tell your peers at the company. “I see no reason to tell coworkers, other than the fact that they will find out anyway,” says Krow.

And for this reason, Davidoff says you may want to tell people before they discover you’re dating a coworker via social media or become suspicious based on various behaviors, such as leaving the office together. “It’s probably wisest to tell HR and your manager first, and then your team, and then friends throughout the company,” she says. “I don’t think it has to be a big announcement—maybe say it at a team weekly for your smaller team or tell people one-on-one.” If you’re not sure of the best route, Davidoff recommends asking HR what they prefer. (And if you don’t have an HR department, ask your manager).

Do: Establish boundaries and practice discretion

It’s important to establish boundaries from the start to ensure you’re both on the same page regarding how the relationship is defined, says Lisa Concepcion, certified professional life coach, who specializes in dating. “If either one of you sees it as just a hookup, that’s where things can get messy.” That’s precisely why having an open conversation about how you both feel about office romances is also important, she says.

Once you’ve decided the relationship’s the real deal and have “come out” to your employer and coworkers, you’ll still want to limit your interactions, says Davidoff. “If they work in accounting and you’re in graphic design, then there’s really no need to be talking during the day,” she says. “If you work in the same department or are actually working together on projects then keep the focus on work.”

You’ll also want to be cognizant of the comfort level of those around you, says sexologist Jess O’Reilly, PhD, host of the Sex with Dr. Jess podcast. “If you date someone at your office, it can affect how others interact with you,” she says. “For example, you might make inside jokes or refer to your personal lives in a playful way that makes others feel uncomfortable or excluded.” The solution, she says, is to be mindful of how you might feel if the roles were reversed. “Pay attention to how others react to your personal banter so that you can make adjustments as needed,” she advises.

Do: Consider the consequences

If you’re toying with the idea of an office romance, Dr. Jess suggests first asking yourself the following questions:

Then, she says, follow the relationship through to its worst-case scenario outcome. “If you break up, you need to consider how you will interact and how these interactions will affect group dynamics at work,” she says. “Does that tension affect your productivity or adversely affect how your coworkers interact with you?”

And finally, let’s say you’re hopelessly in love with someone your company prohibits you from dating. What then? I think you have a chat with HR to see if there are ways to work around it—i.e. reassigning someone, signing certain paperwork, etc,” says Davidoff. “Hopefully, your HR department is reasonable and can talk through different scenarios so that the relationship wouldn’t interfere with the company!” Krow, however, offers different, more potentially disquieting advice. “In a perfect world, one person would leave the organization,” he says.

Romance isn’t the only interpersonal stressor at work—here’s what to do if your coworker is sucking the oxygen out of your office by being very needy. Plus, there’s more than one kind of love to be found through your nine-to-five. With help from career-advice columnist Amy Odell, land a job you more-than-like in just four weeks.