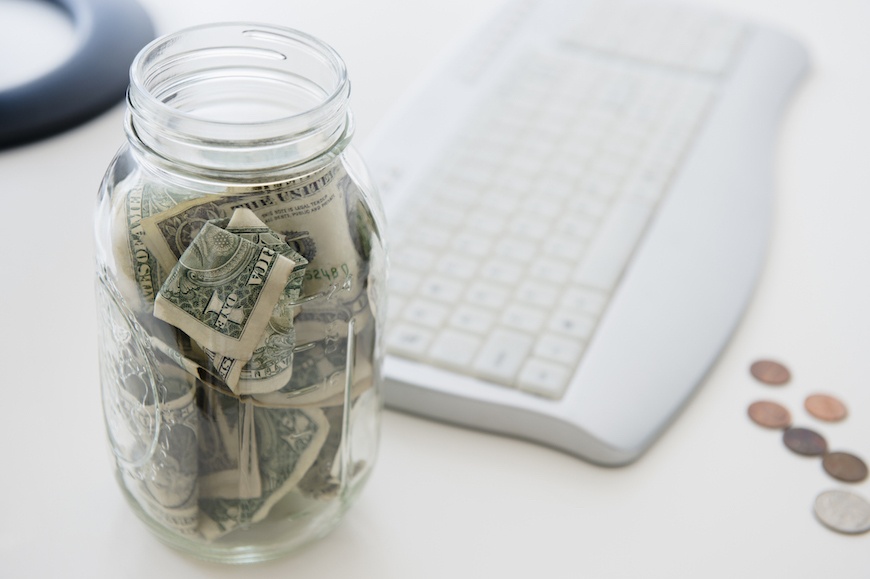 A friend and I recently created what we’ve come to call our “You Are Beautiful (in Every Single Way)” Jar. It’s an old flower vase with a marker-drawn label, and it’s currently filled with dollar bills (and one glaring $20). We came up with the idea after one of our typical volleys of self-flagellating call-and-response, which usually go something like this:

Good friends will call you out when you are unkind to yourself—and not just in regards to how you say you look. Maybe you reflexively label your ideas as stupid. Maybe you doubt your decisions. Maybe you worry long after the fact about the way you handled yourself during a social interaction. Maybe (actually, make that a ‘probably,’ especially if you are a woman) overcoming imposter syndrome feels impossible, thanks to a constant fear of being exposed as a fraud despite the evidence everywhere that you are not.

My friend and I decided to monetize our self-sabotage in hopes that by forcing ourselves to pay for the action, we’d start to change our thought process and begin overcoming imposter syndrome. Think of it as a kind of cognitive behavioral therapy, but instead of curse words or bad behavior (à la the Douchebag Jar in New Girl), we’d ante up for negative self-talk—and then donate all the money to Planned Parenthood (so, win-win).

In my 42 years, I’ve journeyed far on my voyage of self-acceptance. Having recently accepted a job title I held a different company several years ago, but now in a much more self-assured and positive headspace has highlighted that progress for me. But for some reason, resisting cutting myself down, even in the face of clear personal and professional accomplishments, is a skill that has yet to stick. Now it’s time to finally stop.

In 2015, at age 38, I was made editor-in-chief of a small but influential city magazine. I’d been working—happily—as the deputy editor for about a year, and when my boss gave notice, everyone agreed it was a forgone conclusion that I’d take over.

Taking on an editor-in-chief-ship flicked every nerve ending in my body. My boss was a natural who had a seemingly endless stream of ideas and a clear sense of confidence about whether she was satisfied with the page in front of her. While I’m plagued with the Libran tendency to see every side of all things, she was definitive in her taste. She either liked things or didn’t, end-stop. I was sure that in her absence, I’d be exposed as someone with no ideas, with no creative eye, with nothing whatsoever to offer. It didn’t matter that I had two bachelor’s degrees and a master’s, or years of publishing experience under my belt. It didn’t matter that all my superiors were excited about my taking over, and it mattered as little that it was my brilliant boss’ suggestion that I do it—this woman I esteemed, telling me I had what it took to fill her shoes. None of it resonated as loudly as the voice in my head telling me that I had fooled everyone, and that soon enough, they would know I was a fraud.

The only thing I was unflappably confident in was my own understanding of my inadequacy.

I hadn’t even landed the position the normal way, I told myself, which was working up the chain and fighting for the title. No, I’d gotten the job out of desperation on the part of my company, because the big boss was leaving, and they couldn’t find anybody better to fill the spot (as if those two scenarios weren’t exactly the same).

Every ounce of my being wanted to say no—or, more accurately, wanted to run screaming out of the office and into the street, never to be heard from again. But I ultimately accepted the offer because saying no felt tantamount to admitting that I lacked ambition and drive and was maybe even a little bit lazy. It seemed as good as quitting, and if I were going to quit (or get fired), I might as well first give the job a shot.

Once I officially accepted, I had a nervous breakdown. I spent the better part of a week in tears, telling the many friends who were kind enough to listen that I didn’t want, couldn’t handle, and would obviously fail at the job. When they would point out all my qualifications and experience, I would brush them off. (The only thing I was unflappably confident in was my own understanding of my inadequacy.)

If improv is “yes, and,” then imposter syndrome is “yes, but.” It is a persistent voice that says you’re a phony. It is not kind. It is not helpful.

For the first few weeks of the new gig, I’d wake every morning in a state of panic and force myself out of the house with a combination of gumption and Xanax. Occasionally, I’d run into a friend on the subway or on my three-avenue walk from the train to my office, and just seeing their face would start me over at point A, which was crying. A month or two in, the anxiety settled, but I still felt like a fraud. I was good at commanding a room and pretending like I knew what I was doing, but inside I was forever questioning and wondering if my team or highers-up could tell that I had no idea what I was doing. If improv is “yes, and,” then imposter syndrome is “yes, but.” It is a persistent voice that says you’re a phony. It reminds you of the formal breeding you lack (in my case, the absence of experience in the Condé closet or Hearst elevator) and hisses at you in meetings about how stupid you are for not knowing more about SEO and analytics and e-commerce and EBITDA and MRI and CommScore and digital traffic. It is not kind. It is not helpful.

But it is also not enduring. When I was in motion, which an editor-in-chief almost always is, the self-doubt would get drowned by the sheer number of things I had to do. There was no time to hyperventilate when there were proofs piling up on my desk and a day’s worth of meetings on my calendar. In this torrent of motion, I found myself not only getting things done but actually enjoying myself. I felt my strongest when I was mentoring younger writers and editors, those who seemed to truly need my guidance and who I felt could genuinely benefit from my expertise (which I slowly but surely began to realize was, actually, expertise). I sought out the microcosmic, nitty-gritty duties of editorship, studying transitions between paragraphs and sitting down with writers to talk about sidebar treatments. I was confident in words, and once I harnessed that, I became confident in other areas. Little by little, I became confident in my job, end-stop.

Recently, I found myself in the same position I’d been in in 2015—this time at a bigger and more well-known magazine. A boss had left, I was the presumptive replacement. Only this time, when I got the official offer, I said, “Sure, I can do it,” and I actually meant it. I stopped to think about whether I wanted to do it, but that’s different (and something more people should do when presented with the so-called “opportunity of a lifetime”). I’ve tried to figure out what changed in these few years: I am older. I am on an antidepressant. I have the benefit of having been through this before. I have fewer f**ks to give.

Something I didn’t expect is that my confidence shift actually helps me do my job better, both as a leader and an editor. When my staffers say, “I’m sorry for asking so many questions,” I remind them that good journalists ask questions, and if we didn’t, how would we possibly learn? When they preface with, “I know this is probably a stupid idea,” I tell them there’s no such thing, and that some of the best ideas develop from those we’ve defensively labeled as “stupid.” The majority of people on my team who do this sort of thing are women—and why wouldn’t they? We’re paid less than our male cohorts, and many of us report to men. We do the work, and they get to tell us whether it’s good. When the response is that it’s not good, we turn the critique inward.

At work, the thought of the jar shakes me of habits I relied on for so long: phrasing statements as questions and peppering exclamation points throughout emails to bosses so as not to alarm, overwhelm or anger them.

I’d like to bring my “You Are Beautiful” Jar to work, but it’d probably be unethical to ask my employees for money. So I do the next best thing: When they are apologetic for asking a question or not knowing something, I say, “With so many people more than happy to take away your power, why would you join them?” I tell them that they are their own best advocates, that negative self-talk is self-defeating, and that if they can’t yet honestly, organically believe in themselves that I hope they’ll fake it until they make it.

I try to remind myself of all these things, too, and when I forget, I have the jar to remind me. At work, the memory of it shakes me of those habits I relied on for so long to keep me in my place: phrasing statements as questions and peppering exclamation points throughout emails to bosses so as not to alarm, overwhelm or anger them. In my personal life, it’s what gets me out the door in short dresses I might have previously told myself I am not thin or fit enough to wear. It’s what stops me from giving in to an old habit of twisting myself into linguistic knots on dating sites to become a person the object of my attention might find enchanting instead of asking myself first whether he enchants me.

Which is to say the say the jar is working. Or maybe the jar is like Dorothy’s ruby slippers—an external accessory representing something that was inside me all along.