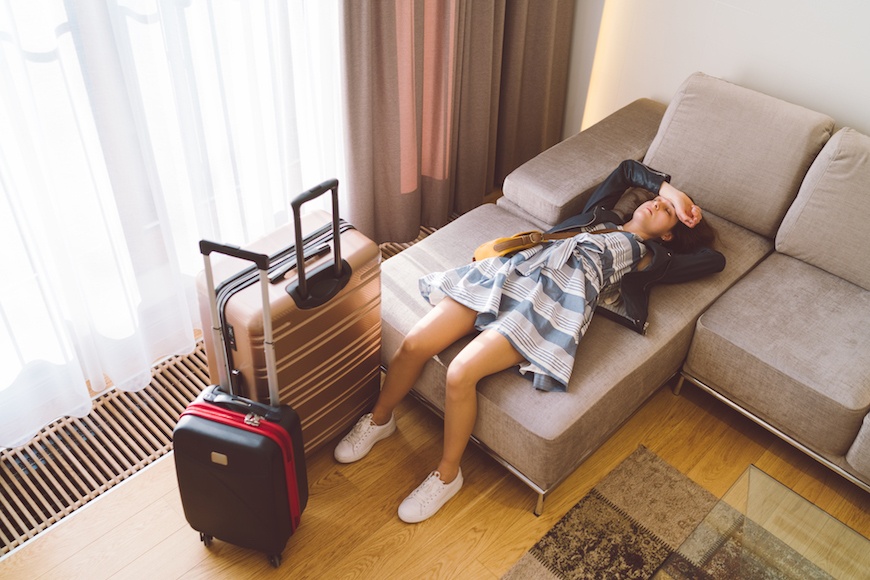 The time and energy we collectively (and individually) spend feeling guilty adds up considerably. According to one poll of 2,000 British people, the average amount of time spent feeling guilty is six and half hours a week. Another survey of 2,000 American parents found that they feel an average of 23 pangs of guilt every week about decisions they’ve made. And researchers at Carnegie Mellon University and the University of North Carolina at Chapel Hill found that between 60 to 70 percent of 450 undergraduate students they surveyed scored high in guilt proneness, meaning they actually anticipate feelings of guilt before they even do anything. Given this pervasiveness of the feeling, it’s important to learn how to deal with guilt so it stops infiltrating our lives. Unfortunately though, there’s no cut-and-dry answer (if only!), and that’s largely due to guilt culture and the psychological implications of of the emotion and sensation.

Anthropologist Ruth Benedict first defined the term “guilt culture” in the 1940s when studying cultural differences between Americans and Japanese. She concluded that US guilt culture characterizes “good” and “bad” by how our internal conscience feels. The guilt regulates behavior and maintains order. And, at least to some extent, that finding helps explain how we’ve been conditioned to feel guilty—in America and elsewhere.

Experiencing some level of guilt is normal and common, clearly, so why is it that we perceive it as a negative thing? Some experts are quick to highlight the positive effects that can come with guilt. “Would you want to know someone who didn’t have the capacity for guilt?” clinical psychologist and psychoanalyst Dana Charatan, PsyD, asks. “If you don’t have the capacity for guilt, it means you probably don’t have a conscience, a whole lot of empathy, or the ability to recognize other people’s experience.”

“Guilt in the optimal dose is wonderful, but like any emotion, excessive amounts of it can be problematic.” —psychoanalyst Dana Charatan, PsyD

She does have a point: Research shows a correlation between people who are guilt-prone and likelihood to show empathy, exhibit other prosocial behaviors that can benefit relationships, and even self-forgive. They also tend to be more reliable employees. “Guilt can be extraordinarily positive because that’s what motivates people to apologize, to do things differently, to try to repair a rupture in a relationship or some sort of conflict,” Dr. Charatan says.

That said, guilt is also commonly linked to anxiety and depression. When Princeton researchers asked participants to recall a time when they did something unethical and then rate their subjective feeling of their own body weight as compared to their average, most people actually felt physically heavier. That is, they felt weighed down by guilt. “Guilt in the optimal dose is wonderful, but like any emotion, excessive amounts of it can be problematic,” says Dr. Charatan, adding that it’s also an issue if you can’t let go of guilty thoughts and feel paralyzed by them. And, really—who wants to walk around weighed down by guilt?

Here’s how to deal with guilt to stop it from interrupting your strong self-care and self-love game.

1. Develop compassion for yourself

Showing yourself kindness and not being so hard on yourself is one of the best ways you can treat yourself well. “We’re all human. Everybody does things that they regret—that’s part of life,” says Dr. Charatan. If you don’t have compassion for yourself, it’s hard to expect that anyone else will have compassion for you or that you’ll be able to have compassion for others, she adds. By framing your would-be guilt trips in this way, you’re less likely to be as self-critical.

2. Catch guilt before it impacts you

Since people experience guilt differently, recognizing your own early warning signs can help you be able to stop it before it affects you. Take a moment to reflect on exactly what’s going on when you begin to feel guilty; are you feeling anxious, paranoid, unproductive?

“There is a difference between guilt at a level 2 and guilt at a level 10,” says Dr. Charatan. She recommends trying to catch guilt when it’s around a 3—at a stage where you can still do something productive with it.

3. Be okay with being uncomfortable

Similar to a tough workout or a meditation practice focused on learning to be okay with stillness, a key aspect of living guilt-free involves being able to tolerate the frustration that often accompanies guilt. “You don’t always need to make things better to alleviate feelings of guilt,” says Dr. Charatan. “Instead, it’s about reckoning with the grief of not being able to fix things.”

Once you’re able to sit with the experience of guilt long enough to figure out where it’s coming from and what you can do with it that can be reparative instead of shame- or anxiety-producing, the guilt often dissipates.

A common catalyst to guilt is the way people can hurt others, says Dr. Charatan. But by being gentler with those around you, you can approach situations in ways that are less likely to make you feel guilty. So before you express a feeling that may get someone’s defenses up or let them down, position your statement in a way that’s not attacking. If you slip up and act in a less-than-ideal way, simply acknowledge it and learn from it.

And remember—it’s perfectly okay to feel guilty sometimes. Feelings are feelings, so they are always valid, says Dr. Charatan.

Now that you know how to deal with guilt, learn here tips for working through grief: There’s a reason so many people get stuck in the third stage of it, and also, a griefcation can help.