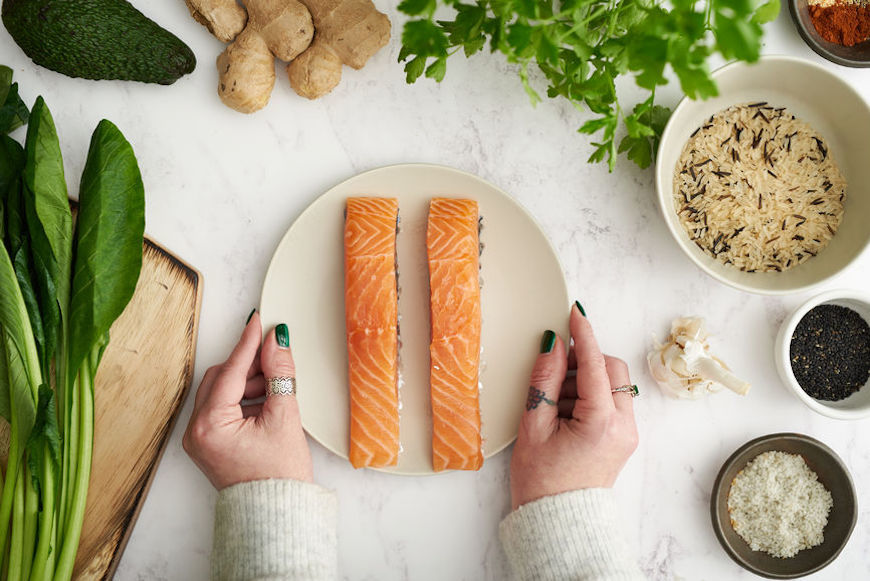 With more and more people adopting the Mediterranean diet (you know, again), grocery store shoppers are migrating from the meat aisle over to survey the fish. It’s true that seafood is high in omega-3s, protein, vitamin B12, and vitamin D, but like other forms of animal protein, the fish and seafood industry has an impact on the environment (albeit a smaller one than cattle or dairy). Over in the meat section, you can look for labels like “grass-fed” and “certified humane,” but because fish are raised and sourced differently, the terminology doesn’t always translate.

The confusion isn’t confined to grocery stores, either. When you’re eating out, it’s typically not spelled out on the menu where the fish you’re about to eat is coming from. Even when phrases like “wild caught” are used, it’s not explained what exactly that means—or whether it’s better than farmed fish.

Well, you’re about to get schooled. Consider this your guide to everything you need to know about eating fish in the most ethical and sustainable way possible. If you’re a fin, erm, fan of seafood, keep reading.

It helps to know at a basic level where the seafood we consume in the US comes from. According to Fish Watch—whose mission it is to help consumers make smart choices about the fish they’re eating—about 80 percent of the seafood consumed here in the States is imported from other countries, primarily China, Thailand, Canada, Indonesia, Vietnam, and Ecuador. (It should be noted that it is often caught by American fishermen.)

Seafood imported to the US must meet strict criteria, set not only by the Food & Drug Administration—which ensures foreign processing facilities pass inspections—but also agencies specific to certain breeds of fish, as the best environment for one might not be the best for another. “Seafood Watch and other watchdog groups have done such a great job of making sure that what’s available to people is truly sustainable that they basically block [importers] that aren’t,” Love The Wild founder and sustainable seafood advocate Jacqueline Claudia says.

When it comes to seafood sourcing, there are two main categories: wild-caught and farmed (also called aquaculture). According to Seafood Watch, both can be sustainable choices. Wild-caught fish are caught by fisherman in their natural habitat. This is how most people like to envision their fish being caught, and it can be ethical as well. But in some cases, wild-caught fish can actually contribute to depleted fish populations, says Seafood Watch—snapper, halibut, and yellowtail are three of several fish species that are at risk of endangerment because of over-fishing. Depending on the fisheries’ practices, wild-caught fishing can also damage natural ocean and river habitats, and other animals (like dolphins and sea turtles) can accidentally get caught and killed in the process.

Wait, why is everyone eating fish all of a sudden? Blame the Mediterranean diet:

On the farming front, Claudia explains that there are 13 basic culture systems for farming fish, which take into consideration what various types of fish need naturally to thrive. “Trout, for example, want a current of rushing water that feels like a river, while salmon or sea bass are more open-ocean fish,” she says. Fish farmers, she adds, must keep this in mind when creating a good environment for their fish. Fish farms either set up pens in natural bodies of water which have two layers of mesh—one designed to keep the fish in, and the other designed to keep predators out, she says—or create enclosures filled with filtered water on land.

In these controlled environments, farmers can control what the fish eat and ensure they live in an unpolluted, non-toxic environment. Claudia says that making the pens big enough for their fish to have ample room to swim—typically a ratio of 98 percent water, 2 percent fish—can be tricky because unlike farm animals, many types of fish like to be close together in schools. “Some fish feel anxiety if there is too much space separating them, so that’s something else fish farmers have to take into account,” Claudia says.

While there are many positives to aquaculture, many fish farms aren’t properly maintained, which can lead to contamination. “When we are looking at fish it is generally accepted that farmed fish are more likely to contain a higher concentration of contaminants including polychlorinated biphenyls [PCBs], which have been linked to developmental abnormalities,” says The Conscious Dietitian‘s Rachel Dickens, RD. (PCBs, a type of industrial chemical, have been banned in the US since the late ’70s but are still prevalent in the air and water because they are very slow to break down over time.) “These contaminants find their way into ground, lake, and ocean water from our household and industrial waste, and then into the fish who live there,” Dixon says. While all fish contain some levels of PCBs, many carnivorous farmed fish like salmon eat feed made with smaller wild fish—the Animal Welfare Institute says it takes five pounds of smaller fish to produce one pound of farmed salmon—meaning that these farmed fish can get a highly concentrated diet of PCBs.

Other issues, per Seafood Watch: Holding a high concentration of fish in a confined space produces a high concentration of waste, which potentially could run off and pollute the surrounding environment. There’s also the risk that diseases could spread from the farmed fish to wild populations, or that some farmed fish could escape from their habitats and affect the wild fish ecosystem. The use of wild fish to feed farmed fish also isn’t helping with overfishing, according to a 2019 study, which concluded that “global aquaculture production does not substantially displace fisheries capture; instead, aquaculture production largely supplements fisheries capture.”

Generally speaking, seafood is considered a great source of heart- and brain-healthy omega-3 fatty acids along with B vitamins and protein—which is why it’s an MVP of the Mediterranean diet. “While there is no official recommended daily allowance for omega-3 fatty acids, a general consensus is somewhere between 250 to 500 milligrams DHA and EPA omega-3 fatty acid combined per day,” Dickens says.

However, sourcing can impact the amount of nutrients available in your seafood. “The omega-3 content of farmed fish varies greatly depending on what the fish pellets are made from,” Dickens says. “What we often see is farmed salmon being higher in total fat,” she says, which can often skew to have more omega-6 fatty acids than omega-3s. While there’s nothing inherently wrong with omega-6s, Dickens says that most of us get too much of it from vegetable oils and other processed products, and “excess omega-6 can inhibit our body’s utilization of omega-3 fatty acids.” That’s why Dickens typically prefers wild-caught fish, especially salmon, to farmed fish.

Dickens recommends people eat more smaller fish like sardines and anchovies. “Smaller fish contain lower amounts of ocean contaminants including PCBs and mercury,” she says. “These contaminants move up the food chain when bigger fish—like salmon and tuna—eat high amounts of these small fish.” She adds that sardines are packed full of omega-3 fatty acids, containing around 1,400 milligrams per 100 gram serving, compared to 2,200 milligrams per 100 gram serving of salmon.

She also encourages consumers to incorporate more seaweed into their diets, another oft-overlooked nutritional powerhouse. “Seaweed is high in trace minerals and one of our best natural sources of iodine. It’s available for harvest with very minimal effort, just make sure you source your seaweed from a reliable source,” she says.

Whether you’re buying wild-caught or farmed fish, there are labels to look for that ensure that the fish you’re buying has been ethically sourced. The big major one is the Marine Stewardship Council, which takes into account codes and guidelines provided by the UN Food and Agriculture Organization (FAO), ISEAL, and the Global Sustainable Seafood Initiative (GSSI). These standards require fisheries to combat overfishing, have a minimal impact on the environment, and other requirements. Over 30,000 brands have met the MSC’s requirements.

The Aquaculture Stewardship Council is another label to look for, which is an independent non-profit that has a certification for fish farms. Like MSC, it also works with ISEAL and the FAO to form its requirements. Brands that have this seal farm fish according to particular specifications for that species of fish: ASC-certified salmon farms, for example, set strict limits on how much wild fish is used to feed farmed salmon, and follow particular protocol to minimize disease outbreaks and reduce the impact of the farm on the local environment. They also have a unique standard for seaweed operations with a similarly strict set of regulations that prioritizes quality and sustainability.

If you’re at the grocery store and don’t seeing any specific labeling on fish and other seafood options, talk to the folks at the fish counter and ask them about where they source their supply. One label you won’t find at all is “organic,” as there aren’t standards for wild-caught or farmed fish companies to meet yet, although the USDA says it’s currently working on an organic standard for aquaculture (read: fish farms).

What to keep in mind when ordering seafood at restaurants

Robert McCormick, the brand chef at True Food Kitchen—which has locations across the country and is known for their commitment to health and sustainability—says being a restaurant that goes the extra mile to ensure their seafood is ethically sourced is a challenge. “We rotate our menu seasonally and part of what we think about is if there’s a type of fish that’s being overfished, and if so, we won’t put it on the menu,” he says. While not all restaurants take this precaution, as a consumer, you can do so by using the Seafood Watch app, which makes it easy to look up any breed of fish. They also offer online guides on the most and least sustainable fish options in particular regions in the US.

McCormick reiterates that both wild-caught and farmed fish can be sustainable choices and says it’s more important to trust the restaurant you’re eating at. Does their website or staff have information about where their food is sourced? Are the other foods on the menu ethically sourced, organic and grass-fed? If so, it’s a good indicator that the fish was carefully chosen as well. (Of course, still doesn’t hurt to ask and make sure!)

Yes, this is a lot of information. But it shouldn’t deter you from eating fish, which is full of nutritional benefits. Like with all food shopping, it comes down to being familiar with the terms on the label, and favoring brands that have gone the extra mile, securing certifications from non-partial third parties. “The key is being presented with the appropriate information to be able to make the most sustainable choice,” Dickens says. Now that you have the info you need, go hook yourself some (sustainable) fish.

Here’s how to make sustainable choices when buying alternative milk. Plus, tips on cooking with food scraps.