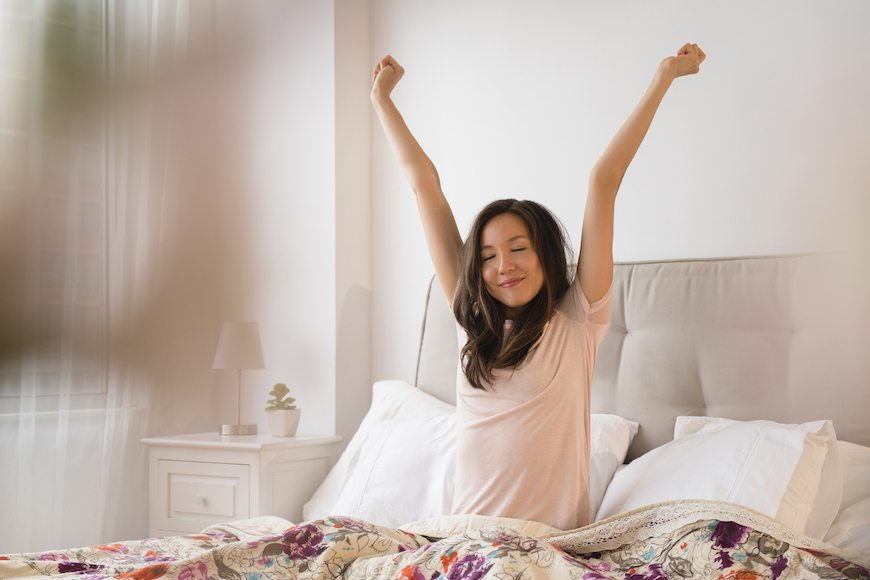 Aside from that one time it meant realizing I didn’t actually marry Paul Giamatti in a Walmart, waking up can feel like the worst part of the day. In my case, a strong reason for this is because annoying alarm clock sounds are the first thing I interact with—and it really sets a, um, tone. So when a co-worker recently shared her go-to wake-up hack that puts her in a—wait for it—good mood first thing, my ears perked. Even better, her tip is super-simple: switching her alarm sound from a shrill noise to something calming and ethereal, like a harp.

This makes sense to me because I often wake up in a panic thanks to the loud noise blaring from my nightstand. It also speaks to me because whenever some maniac chooses my alarm sound as their ringtone (talking to you, three people who aren’t living the vibrate-only life), their incoming calls lead me to literally jolt up in my seat like Pavlov’s dog, reincarnated. So, I’m curious about two things: Can opting out of annoying alarm clock sounds in favor of something more serene lend itself to a sunnier mood from the get-go? And does regularly switching these sounds, the way you’re forced to change digital passwords every now and then, safeguard you from creating a negative association with a certain tune, and in turn, waking up in general?

While there aren’t a trillion studies on whether a soothing sound is more effective than blaring “Bad to the Bone” bright and early, the consensus is that a less aggressive noise can help with mood, but it really boils down to preference and just how deep of a sleeper you are. “There’s some research suggesting that a more gentle alarm is better and less jarring—and many of my patients do agree with this,” says sleep specialist Shelby Harris, PsyD. In fact, one recent small study conducted by RMIT University in Australia suggests that a a melodious alarm sound can combat the effects of sleep inertia, which is that groggy feeling that you may experience the first 15 to 20 minutes after waking up (but it can follow you for up to four hours if you’re particularly unrested).

Keep in mind what you know to be true about your body and sleeping habits, though, because the most important factor at play is whether or not your alarm successfully wakes you up. (And for some, the auditory caress of a flute is just like, not going to lure eyes to open.) “There are many people I work with who end up sleeping through those [gentle] alarms for various reasons,” Dr. Harris says. “They could be deep sleepers, insomnia patients who only fall asleep later, people who just don’t really want to get up, and so on. Sometimes something more jarring is what is necessary.”

As far as changing up your alarm tune, it’s true that the strategy may safeguard you for ruining a certain sound forever to your ears. For a year in high school, I woke up exclusively to “The Tide is High,” and while I can skip that song when it comes on shuffle on my personal device, I can’t run from every Applebee’s that plays Blondie ad nauseam. And that’s just something I have to live with.

What I don’t have to live with? Needlessly aggressive and unmelodious alarm sounds. So definitely discard the the jarring noises if you don’t need to rely on a jackhammer-esque racket to lure you away from your sweet slumber.

If you’re looking for another soothing wake-up strategy, a sunrise alarm clock might be a good way to brighten your mornings. And this guide can help you become a morning person in three weeks flat.