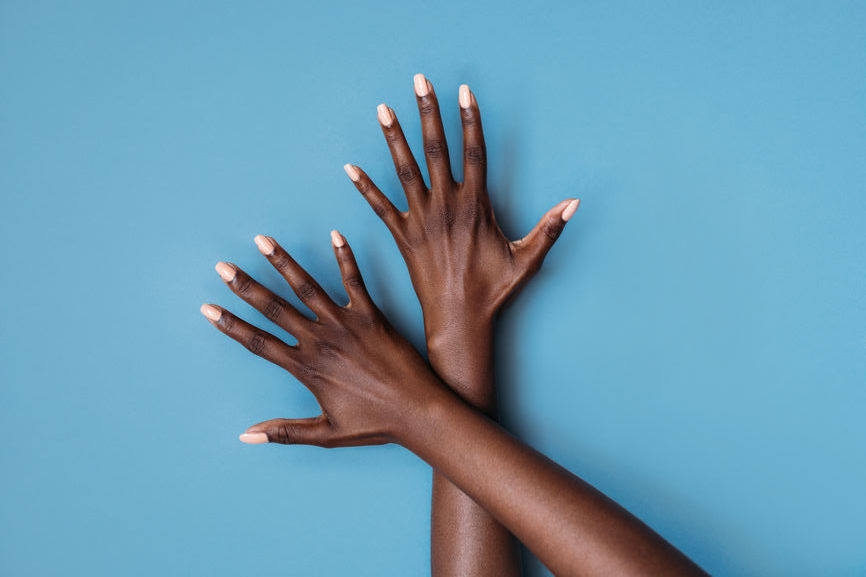 Pretty much any time I find myself face-to-face with a professional tasked with taking care of me in some way—doctors, dentists, stylists, facialists, nutritionists, et al.—I feel a sense of shame around how I’ve been taking care of myself. (Read: imperfectly.) In most cases, I definitely have not been doing the things they’ve advised me to do between visits, like flossing twice a day (in the case of a dentist), while I often have been doing the thing they would like very much for me not to do (eating gummy foods like dried fruit).

Walking into a nail salon is no different, especially if I’ve been wearing gels that have, by the time I get around to removing them, been peeled and pulled and just generally left on way too long. Until recently, the feedback I’d received had been delivered in the form of scornful looks, but trust me, the manicurist’s at my go-to salon are not happy about my habits.

I’m guessing I’m not alone in engaging in nail-based faux pas that give manicurists extra headaches. So, I polled a few to see which nail hygiene habits irk them the most.

These are the things manicurists want you to stop doing ASAP

“That little piece of skin is just there…  staring at you, catching on your sweater, hurting just enough to remind you it’s there,” says Mary Lennon, founder of Côte. “The urge is undeniable, but don’t fall victim to one of the worst at-home, manicure-wrecking mistakes! Resist! Picking at your cuticle can cause inflammation and irritation, make you more susceptible to infection and occasionally even cause bleeding.”

Once you’ve picked at a cuticle, it becomes difficult for a manicurist to work with it. “An open wound or cut skin will not only cause you discomfort during your manicure service but let’s face it, it’s just not cute,” she advises. “Leave the real cuticle nipping to the professionals, but if you have a small hangnail and can’t get in for your regular manicure, do your best to carefully clip the loose end using cuticle nippers.”

2. Picking off your polish

If you’re the type to pick at your nail polish when you’re nervous, distracted, or bored, Lennon warns you’re at risk of doing real damage. “The nail bed is made up of layers of a protein called keratin,” she explains. “When you pick at your polish, given the great adhesion properties that are built into most formulas these days, you will actually take off layers of your nail along with the polish.” This loss then makes your nails weaker and more susceptible to breakage. “Strong, healthy nails are the key to a great looking and long lasting manicure,” says Lennon. “Just ask your manicurist!”

3. Buffing the top of the nail

Say you have bare nails that are peeling a bit at the tip, so you take a buffer to the top of the nail to smooth it out—seems like a sensible move, no? No. “That’s not the right move as that can thin your nails and make them even more brittle in the long term,” says Nadine Abramcyk, co-founder of tenoverten. “Instead, focus on hydration from the inside out with increased water intake and from the outside in with a super hydrating cuticle oil to apply a few times throughout the day.”

“Non-acetone remover does the trick of perfectly removing any conventional nail polish, so avoid removing with pure acetone which is overly harsh and drying to the nail [and can cause] potential long term damage,” Abramcyk advises.

5. Using a nipper to cut away the corners of your toenails

While this tip ventures into the pedicure space, it’s worth inclusion regardless. (After all, I can’t be the only person who does this and, apparently, shouldn’t). “Cutting at a harsh angle to relieve pain from a possible ingrown toenail only leads to a deeper angled growth of the nail, so try to resist cutting your own toenails in between visits,” says Abramcyk.

6. Cutting your nails yourself

“Clients tend to cut their nails too short and then we have nothing to work with when shaping and cleaning up,” says Mariah Garcia, Lead Nail Artist Educator for BaseCoat Salon.

7. Peeling off your gel polish

“Peeling off gel polish removes layers of the nail plate, causing pits which must then be filled,” Garcia explains. “It also can cause long term damage such as pits or beaus lines.” (*Blush emoji*—it me.)

“When clients add layers and layers of polish over the span of weeks, it can be really difficult to remove,” say Garcia. “Staining can be a long term effect of this.”

9. Removing polish just before a manicure

While you might think you’re doing your manicurist a favor by removing your polish before you head into the salon, Garcia says this isn’t so. “At home products do not work nearly as effective as professional products,” she explains. “We have clients who come in with smeared polish all over their skin [from ineffective polish remover], and it’s time consuming and a pain to scrub off.”

“Emery boards are common at-home tools, however, we try to educate clients on why glass files are far better for your natural nails,” Garcia says. “Emery boards tend to shred the nail plate and cause peeling which can be hard to repair.”

Nail artist and Artiglio founder Sarah Bland tells me that while salons are marketing dip nails as a healthier alternative to gel, they’re actually not. “Most places aren’t using a sanitary method to apply the powder,” she explains. “They’re also using a drill with the application and removal of dip which isn’t necessary and ultimately more damaging than gel would ever be.”

“Stop texting while we’re applying gel or polish,” begs Bland. “The more you move the more imperfect the manicure!”

Major intel alert: Miley Cyrus’ manicurist says this $1 tool is the most important thing in her kit. Plus, here’s how to actually get stronger nails, according to the pros.