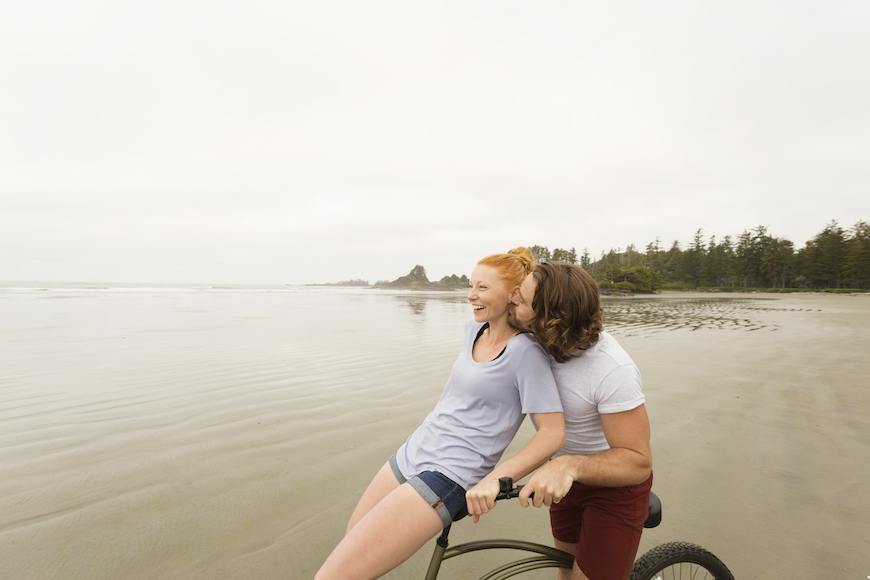 It’s always baffled me that my gray, grimy, candy-wrapper-laden couch is the setting for so much of my sexual activity. But recently, I learned about responsive and spontaneous desire, and the differences between them helped to clear up confusion about the goings-on reserved for my literal love seat and also how to get turned on—no matter who you are or what does it for you.

“There are two ways that we get turned on and ready for sex: In our heads and in our bodies,” says sex therapist Vanessa Marin, creator of The Passion Project, an online course for couples who have mismatched sex drives. “We need the mental desire for sex, and we need the physical arousal for sex. Desire and arousal sound pretty similar, but they work independently of each other. Sometimes they can even work in opposite directions.”

Since this directional component can be tricky to navigate, knowing the difference between spontaneous and responsive desire is helpful for providing clarity about how to get turned on. “If you’re a spontaneous type, you feel the mental desire first, then the physical arousal second,” Marin says. “If you’re a responsive type, you feel the physical arousal first, then the mental desire second.”

But before I draw what seems to be an obvious conclusion about how to get turned on, a word on gender and sexuality: We know that sometimes gender identity and sex identity don’t align, meaning there’s no required under-the-pants equipment to be a man, woman, trans, gender nonconforming, gender-fluid, gender-variant, agender, or bigender. So while I use the cisgender terms “men” and “women” going forward in this piece to explain hypotheses about desire, the intent is not to diminish the spectrum of sexuality and identity. To wit, there’s no clear, gendered line here. Instead, a combination of biology and socialization that point to a few reasons women might experience responsive desire more than spontaneous.

While Dr. Nagoski’s research does note that men and women are both capable of feeling spontaneous and responsive desire, men skew more stable in their ability to feel spontaneous desire, while women fluctuate in this sphere. According to Zhana Vrangalova, PhD and professor of human sexuality at New York University, biological elements like pregnancy, ovulation, or being postpartum can all impact the ability to have a knee-jerk spontaneous desire for sex. It may also be a result of a long-term relationship, given that women may see a sex-drive stall in committed partnerships, feeling less arousal and in some cases, satisfaction.

Socialized elements may also explain the divide. Dr. Vrangalova points to the gender norm of men typically being the pursuers. And even if you are a woman who has a high libido and a natural-leaning sense of spontaneous desire, cultural norms may still shape how you act upon it, which in turn may shape your perception of it. For instance, if you’re turned on, scooting closer and closer to your partner who remains totally engrossed in the movie they’re watching, you might end up waiting the situation out until they eventually put their hand on your thigh and engage the whole initiate-sex sequence right there on your grimy, gray, candy-wrapper-laden love seat. It may seem like responsive desire at play. But maybe it’s not.

The most important thing to remember though, is there’s no right or wrong way to desire. If you’re always down, any time of the day, any day of the week, great. And if you need to be stimulated by some external factor to get in the mood, that’s great too—just ask me and my love seat.

Let’s talk about low libido and sex that can feel like a chore. Also, did you know sharpening your senses can make for better pleasure in bed?