Skip to content
Beauty, City, Fashion, You and your body

Splash the patriarchy: Why the it-swimsuits of hot girl summer are sleek, sexy, and subversive 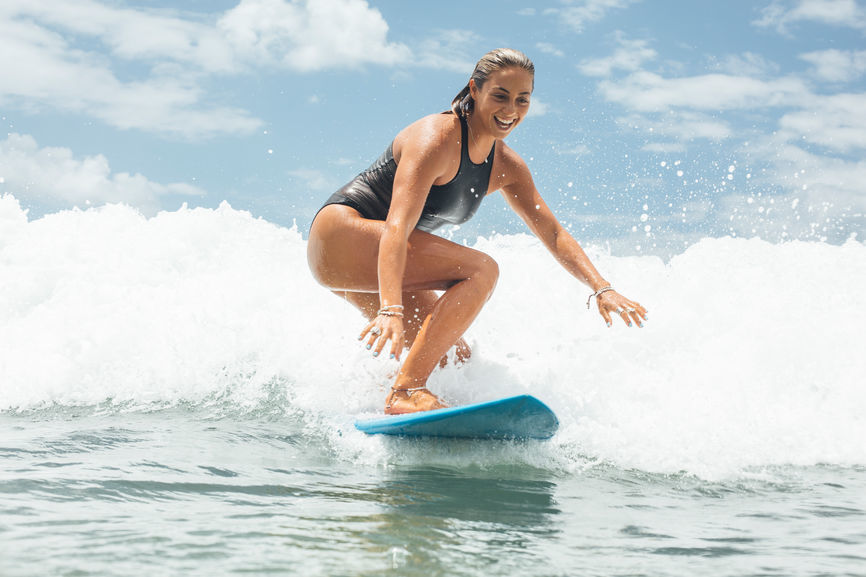 Think back to the year 2004. Everyone was quoting Napoleon Dynamite, signing up for this new thing called Facebook (with their .edu email addresses), and working out in ratty shorts and t-shirts. Athleisure was, and I cannot emphasize this enough, not a thing. In the decade and a half since then, the activewear industry has made huge strides in creating functional performance wear that also looks on point, but one category has been left behind: the swimsuit.

A scroll through Instagram is all the evidence you need to see that this year, swimwear designers finally figured it out. Thanks to female-founded brands like Left on Friday, Knix, Andie, and Summersalt, one-pieces haven’t been this hot since Pamela Anderson made her slow-mo run down the beach. But in a serious upgrade to Anderson’s revealing red maillot, the styles that dominated your feed—and likely your closet—this summer are sexy and supportive.

“Nothing was solving for what we wanted, which was super-high-end, comfortable, beautiful swimwear you could wear while surfing, swimming laps, or lounging at the Four Seasons,” Left on Friday co-founder Laura Low Ah Kee says of the inspiration for her brand. Melanie Travis, the founder and CEO of Andie, agrees: “Women lead active lives and need swimsuits that can seamlessly work with them, not against them.”

The notion that women would want a bathing suit that works as well in motion as it looks at rest seems obvious—so why did it take us so long to get here? “The swimsuit is arguably the most controversial garment in history because of its direct relationship to the female body, something that society has historically policed and still tries to police to this day,” Cassidy Zachary, fashion historian and co-host of the podcast Dressed: The History of Fashion, says.

Bathing suits created for mass consumption first appeared in the middle of the 19th century, when the Industrial Revolution brought “the technological innovations that allowed for mass production of cloth and the first wide-scale marketing of certain types of ready-to-wear garments,” says Zachary. “Of course, societal mores about modesty were still very much in play, so this is also the era of the bathing machine—essentially, mobile huts in which women would enter, change into their bathing suits, be pulled out to sea by horses, and left to enjoy their public sea swims in relative privacy,” she explains. (Excuse me, what now?)

Also ensuring that a woman’s modesty would remain fully intact: her bulky bathing costume. “Women were quite literally covered from neck to foot in neck-high, long-sleeved bathing dresses complete with tights, shoes, and even corsets,” Zachary says. These suits were also made of wool—chosen for its water-resistant properties, I’m sure—and when wet, could weigh up to 30 pounds.

The early 20th century brought about a more functional suit, when competitive female swimmers were essentially like, Um we definitely can’t race in wool dresses. “The term ‘swimming suit’ didn’t come into use until the 1910s, when it became associated with the more active sport of swimming, versus the leisurely activity of bathing and wading in water,” Zachary says. She points to Annette Kellermann, a female competitive swimmer (and vaudeville star), who Zachary says was “instrumental in both validating the competitive sport of swimming for women and modernizing their swimwear with her controversial one-piece swimsuit,” which looked more similar to what the men of her time were wearing. “By 1918, Annette had partnered with a ready-to-wear manufacturer to bring her signature swimming suits into the mainstream, rocketing women’s swimwear into a new era,” Zachary says.

According to Zachary, ready-to-wear manufacturers like Speedo (founded in 1914) and Jantzen (1916) also acted as “the driving force behind the [swimwear] industry, producing new designs and innovations in fit and technology, almost out of competition with one another. They were instrumental in not only popularizing and disseminating fashionable swimwear to the general public, but being at the forefront of setting new trends,” Zachary adds.

The 1930s ushered in another major development in the functionality department: The invention of a fabric called Lastex helped swimwear retain its shape after getting wet. “Where the body had been the dictator of the shape of the swimsuit for the last 30-plus years, now the swimsuit itself could be used to mold and shape the body with supportive understructures such as built-in bras and girdles,” Zachary says.

“While not radical by today’s standards, for a woman to show so much skin was a huge affront to societal mores surrounding women’s decency.” —Cassidy Zachary, fashion historian

But while some women in the ‘20s and ‘30s celebrated the freedom these new styles allowed them, other people were outraged that they dared to show their shape and bare their knees and shoulders. “While not radical by today’s standards, for a woman to show so much skin was a huge affront to societal mores surrounding women’s decency,” Zachary says. “The natural shape of the woman’s body had been masked for hundreds of years prior, mind you, and now it was on full display.”

So imagine the shock in 1946 when French engineer Louis Réard released his bikini, advertising it as “the smallest swimsuit the world had ever seen.” While two-piece swimsuits had previously existed, his bikini was “by far the most revealing,” Zachary says. It was so scandalous that Réard had to hire a nude dancer named Micheline Bernardini to model it for its debut at a beauty pageant in Paris, because no fashion models would wear it.

The rise of the bikini marks a turning point for another reason: fashion seemed to overtake function. Until this moment, the swimsuit’s evolution largely made it easier for women to be active in the water. But the triangle tops and thong bottoms that would follow in Réard’s footsteps in the coming decades were much better suited for sunbathing than beach volleyball. Which meant, women had to choose: Did they want to lounge by the water in their alluring string bikinis? Or did they want to swim and surf? In which case, they’d need to opt for a more covered-up rash guard or classic racerback Speedo if they didn’t want to risk a wardrobe malfunction.

In 2019, we finally seem to realize that women can have it all—when it comes to their swimsuits. And Left on Friday’s two co-founders, Low Ah Kee and Shannon Savage, believe this can be contributed to the overall trend towards living healthier, more active lives. If you spend your days creating superfood-packed smoothies and staying up-to-date on the latest wellness news, Savage says, you need the clothing you buy to match your lifestyle. “It’s the two worlds [fashion and health] coming together, and in a way where it’s quite sophisticated and elegant,” Savage says.

And it’s impossible to talk about these brands without noting that they haven’t fallen into the trap of creating products that only serve women who look a certain way (i.e. stick thin). Instead, Zachary notes, they create “conscious products that cater to a variety of body types and not just those deemed worthy by the fashion industry and the mainstream media.” Their offerings seem to say: You can be active, and you can be attractive, and you can be larger than a size 2—or 12, or 20. (Summersalt offers size 2-24 in select styles; Andie ranges from XS to XXXL; Knix goes up to what they call XXL+. Left on Friday, which stops at XL, has the most room for improvement in terms of inclusive sizing.)

“Inherent in the swimsuits’ evolution over the years—from a full-body dress and hose to a body-revealing bikini—is women’s fight for ownership over their bodies and for the ability to wear what they want,” Zachary says. Women creating companies that allow real women (and their bodies) the freedom to move how they so choose—and look dang good while doing so? Sounds like a major win in this battle.

Looking to stock up? Here are our picks for stylish suits that stay put. And here’s how to find a swimsuit that really supports you, in the chestal region.