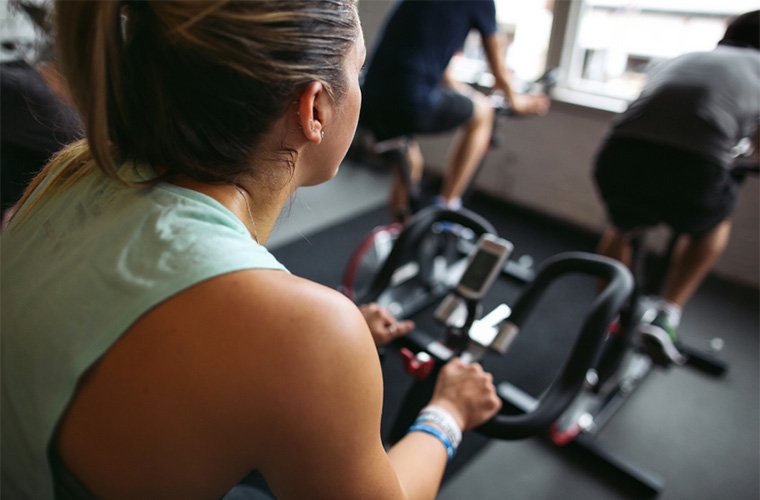 There’s no burn quite like spin class burn. While I’m pedaling away on that bike against the resistance, my muscles are working in overdrive. And I have to admit: Most of the time, the only thing I’m doing during those moments is begging my legs to make it to the end—not fully thinking about what they’re doing. But knowing exactly which muscles I’m using in class—and engaging them at the right times!—is the key to getting the best workout.

“The brain-muscle connection is powerful,” says Samantha Jade, senior instructor at SoulCycle and creator of BODY by SJ. “When you focus on which regions of the body to engage and what position and form you should be in, your neurological system is more awake to send improved messages for even more effective muscle firing, riding technique, and position. The mental focus in your workout increases your output capabilities. Plus, being connected to your body and performance will yield a safer more effective workout.”

Before your next class, find out exactly which muscles you’re working—and should be engaging!—in and out of the saddle.

Which muscles to focus on in the saddle

When you’re riding in the saddle during spin class, there’s one primary muscle group you’re working: your glutes.

“Our glutes tend to be ‘asleep’—especially if we spend most of our day sitting—so you have to consciously think about turning them on. That means literally squeezing each butt cheek, which creates the push/pull that you need to ride strong,” says Jen Tallman, spin instructor in New York City. “This also activates the hamstrings and calves—essentially the whole posterior chain of your legs. Think about leading with your heels down to really dig into those glutes. When one leg is doing the push, the other leg is pulling, and all of that starts in the glutes.”

According to Tallman, you’ll especially feel your glutes and hamstrings during heavy hill climbs. “When you’re in the saddle, the force is 100 percent your legs,” she says. “Your core and arms are there to stabilize you, but your legs are the driving force of pushing the wheel.” Also key? Zoning in on your hips. “It’s important to focus on maintaining a proper hip hinge, which can be beneficial for improved form,” Jade notes.

Which muscles to focus on out of the saddle

While your glutes and hamstrings are the stars of the show when you’re in the saddle, it’s all about your core when you’re out. “A strong core will help you stay out of the saddle longer and stronger,” Tallman says. “Think about tucking your belly button in toward your spine, relaxing your shoulders, keeping a loose grip on the handlebars, and making your core long, not crunched.”

And just because your glutes and hamstrings aren’t the main focus out of the saddle doesn’t mean you should be forgetting about them. “The glutes and hamstrings are both very active in and out of the saddle,” Jade says. “The difference of what is active more so than the other has more to do with the pedal stoke phases. The power phase (push down) involves more glute activation and the recovery phase (up stroke) involves more hamstrings. Higher resistance requires more activation and output.”

The easiest way to engage your muscles during class

If you’ve been having trouble properly engaging your muscles during class, it could simply be due to the shoes you’re wearing.

“Investing in cycling shoes—preferably the SPD type of cleat—will help you with the muscle engagement and makes an indoor cycling class so much more efficient,” Tallman explains. “Wearing a cycling shoe keeps the work in the posterior chain of your legs (glutes, hammies, calves), which is exactly the muscle groups you want to work in cycling. Wearing sneakers prevents your full foot from going inside the cage and can be really uncomfortable during class. Sneakers can also have you leading with your toes instead of your heels which will put strain on your shins and knees.”

With some slight adjustments to your cycling routine, it won’t be long before you’re feeling the burn on an entirely new level.

Are your hips tight after spin class? Here’s the best way to combat that. And if you’re wondering why spin class sometimes makes your knees hurt, this is the answer you’ve been looking for.