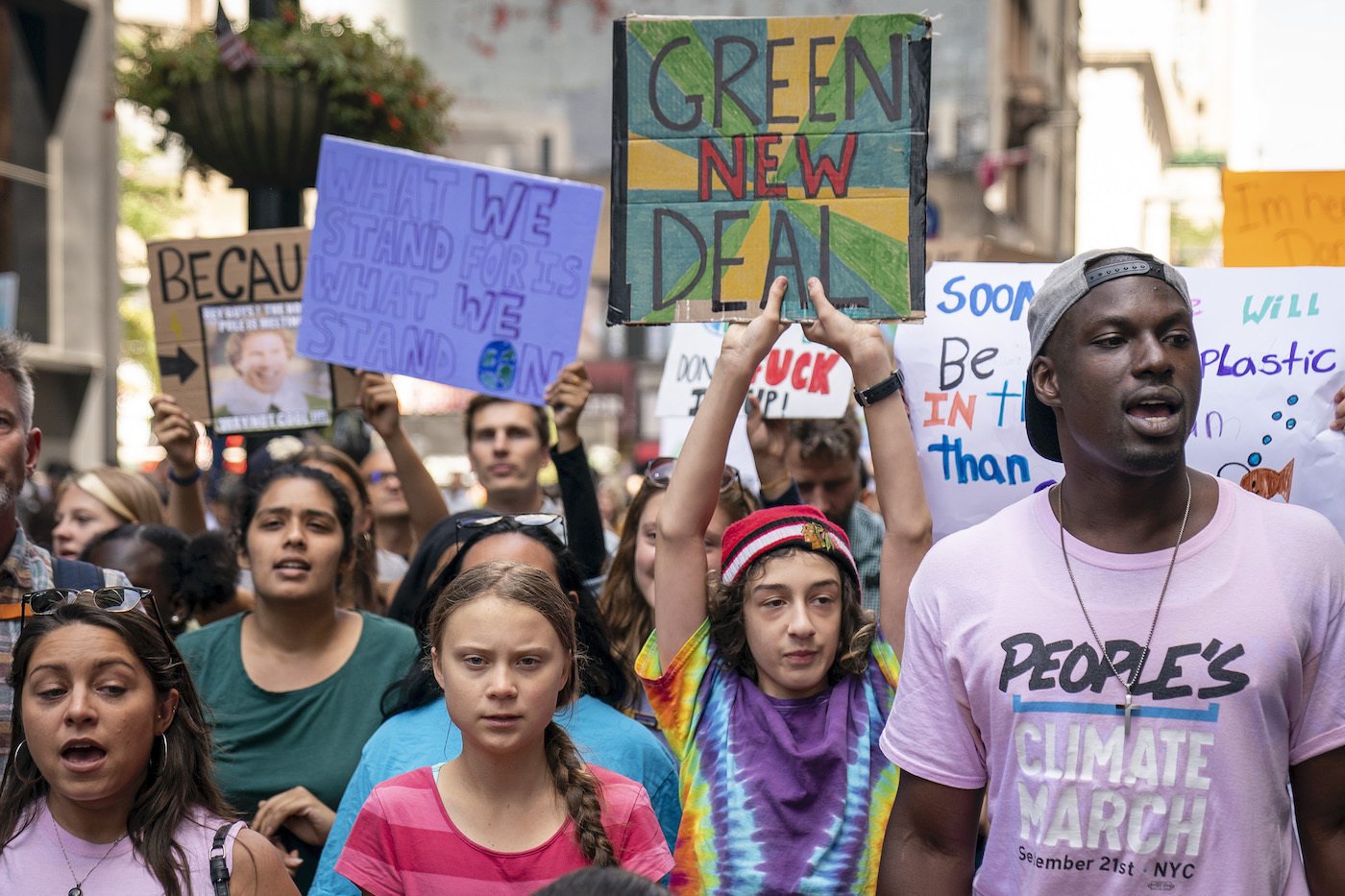 On a sunny Friday morning in Santa Monica, California, dozens of people paraded down the street in front of a gleaming new mall. But this wasn’t the usual weekend shopping scene—instead of toting bags from West Elm and Nordstrom, the crowd carried signs emblazoned with slogans like “Fight for Our Future” and “Make Earth Great Again.” The usual hum of traffic noise was drowned out by a resounding chant: Hey, hey! Ho, ho! Fossil fuel has got to go! And, perhaps most poignantly, many of the protesters were cutting their elementary-school classes to be there.

Without a doubt, these mini-revolutionaries were inspired by Greta Thunberg, Isra Hirsi, and Jamie Margolin, just a few of the teen activists associated with the massive Global Climate Strike of September 20. Organizers estimate that on that day, a record-breaking 4 million people attended 6,000 climate strike events in 185 countries around the world. The Global Climate Strike was a joint effort among several youth-led climate organizations—including Thunberg’s Fridays for Future, Margolin’s Zero Hour, and Hirsi’s Youth Climate Strike—as well as allies such as Greenpeace, the Natural Resources Defense Council, and Sierra Club. Businesses including Patagonia and Ben & Jerry’s closed their doors that day in support of the strike, while websites such as Tumblr and Kickstarter went dark. Each group of local climate strikers presented their own demands. In the US, for example, protesters weren’t just seeking an end to deforestation and fossil fuel use—they were also speaking up for climate justice in the form of protection for indigenous lands and investment in the communities being impacted the most by climate change and pollution.

Despite the enormity of this effort, the activists didn’t stop there. This week, Thunberg and 15 of her peers filed a lawsuit against Argentina, Brazil, France, Germany, and Turkey—five of the UN member nations with the highest carbon outputs—claiming that their failure to meet emissions targets is violating children’s human rights. Local climate strikes continued to take place all week, while a second large-scale global strike is planned for Friday, September 27.

It’s easy to see why so many kids and teens are fired up about the environment right now. They turn on the news and hear scientists say civilization could collapse by 2050 if we don’t hit zero carbon emissions in a decade. They’re living through unprecedented heat waves, floods, fires, and droughts. While older generations may assume they’ll be gone before the worst impacts hit, the under-18 set is seeing their future disappear in front of their eyes. They recognize that not enough is being done to reverse the course we’re on, and they’re refusing to sit back and let it happen.

“Today’s youth does not have the luxury to have a childhood anymore,” says Ciara Lonergan of Earth Uprising, another youth climate organization involved in the Global Climate Strike. “Older generations forced us into giving that away by destroying our planet. But if we strike now, if we work to undo the damage done by those before us, then maybe we can restore that luxury for the generations that follow us.”

Why is Gen-Z tackling the climate crisis with such urgency?

Of course, kids and teens have been hearing frightening news reports about climate change for decades. I remember learning about it at school in the early ’90s—I even did a fourth-grade science fair project about greenhouse gasses—but never felt particularly anxious about how these things would impact my future. So why does this generation, specifically, feel such a sense of urgency around environmental activism?

University of Washington political science professor Aseem Prakash points out that the Black Lives Matter movement helped open Gen-Z’s eyes to the power of activism and social justice, while Juliana vs. United States, a much-publicized 2015 climate lawsuit filed by a group of children and teens, set a precedent for the one that occurred this week. But overall, University of Washington environmental affairs professor Nives Dolsak insists that the spirit of advocacy we’re seeing among youth isn’t a new thing. “Students have always been activists—maybe now it’s just more visible,” says Dolsak, director of UW’s School of Marine and Environmental Affairs. “We’re simply paying more attention to what young people are doing.”

Social media is adding fuel to the current uprising—it’s allowing youth climate activists to spread the word among their peers, and for the global media to see what they’re up to and amplify their messages further. “Young people are feeling more empowered to vocalize their thoughts, [and they’re able to do it] more easily than before,” says Danielle Eiseman, a lecturer at Cornell University and program manager for the Cornell Institute for Climate Smart Solutions. “[Social media] helps normalize the idea that what they have to say is important and valued by other people.”

The movement also owes much of its momentum to its iconoclastic leaders. “Social movements often need symbols around which they coalesce,” says Prakash, founding director of UW’s Center for Environmental Politics. He points to Thunberg as an example, a prolific public speaker who’s captured the world’s attention with her palpable passion and rage. “Greta has defied the status quo. She has motivated a very large number of people and she’s challenging many stereotypes about young people.” Other next-gen climate activists, including Margolin and Hirsi, are fighting to make the climate movement more inclusive by bringing indigenous activists and people of color into the conversation. Indeed, if my 16-year-old self had seen someone who looked like me talking about the miserable state of our planet (rather than a middle-aged male newscaster I couldn’t relate to), maybe I would have been inspired to learn more and take action, too.

That said, the projected consequences of climate change weren’t as dire back then as they are now. As Eiseman points out, nine of the hottest summers on record have occurred in the last 10 years, while natural disasters are becoming more violent, mass extinctions are taking place, and food scarcity is becoming a more pressing issue. “Today’s kids have been hearing about this ever since they entered school,” she says. “They could potentially have the most to lose and the most to gain from anything that happens.” Add in the fact that climate literacy and public service programs are becoming more commonplace in the classroom, and you’ve got a generation that’s more tuned in than ever to the realities of climate change—and the things they can do to help.

Will the youth climate activists actually have an impact on the future of the planet?

On a local level, young climate activists are already seeing results from their efforts. “Its amazing what they’re able to accomplish within their own communities,” says Eiseman. She points to a Brooklyn middle school that built a hydroponic farm inside a third-floor classroom, as well as nationwide, student-led drives to reduce meat consumption and create composting schemes in schools.

But when it comes to creating policy change on a national scale, experts say that there is still much work to be done. Prakash is concerned that many of the young activists are appealing to an audience that’s already on board with environmental reform. “If these climate strikes are taking place in Seattle and San Francisco and New York, it really doesn’t move the policy needle. In these locations, the policy elite are already favorably disposed to climate action,” he says. “Are these strikes taking place in Ohio, Michigan, Wisconsin? That is where the needle needs to move.” Global Climate Strike events were indeed scheduled in both red and blue states across the U.S., from Omaha, Nebraska, to Fayetteville, Arkansas. But the momentum would need to remain in places like this for efforts to have a chance at making a measurable difference.

Prakash adds that it’s also important for climate activists of all ages to walk the walk when it comes to changing their own habits, so they can inspire people in their own communities on days when climate strikes aren’t at the top of the news agenda. “At the moment there’s a lot of finger-pointing going on, but [everyone] should be thoughtful about the effect of his or her activities,” he says. “Every time they buy coffee or use their cell phone, they should wondering where’s the lithium for the battery coming from or where were the beans sourced? Aside from Thunberg, there are very few climate role models. What’s important is that we personify these ideals beyond striking and protesting.”

Prakash and Dolsak believe the biggest impact from the climate strikes may be seen in the corporate sector. It’s already happening—for instance, Amazon and Global Optimism recently unveiled a Climate Pledge that calls on partner companies to reach net-zero carbon emissions by 2040, while Apple announced last week that it will use recycled rare earth metals in its iPhones going forward. “[The strikers’ message] is clearly resonating already, but it may not be the kind of policy change we’re all excited about and hoping for,” says Dolsak.

Even if that’s the case, the youth climate activists are undoubtedly making us all more aware that our planet’s in critical condition. The more voting-age adults who stand up alongside them on both sides of the aisle, the more pressure those in charge will feel to pivot. “This is more than just another march for climate—these worldwide strikes have the potential to be the largest mass mobilization on climate in human history,” says Michael Brune, executive director of Sierra Club. “By striking in solidarity with youth climate leaders, adults have the power to disrupt the business-as-usual politics that have led us to the brink of climate destruction.” Because, as many of the signs at last week’s Global Climate Strikes pointed out, there is no planet B.

Feeling anxious about the climate catastrophe? Find out why that’s a good thing—and then take these five action steps to do your part in healing the world.