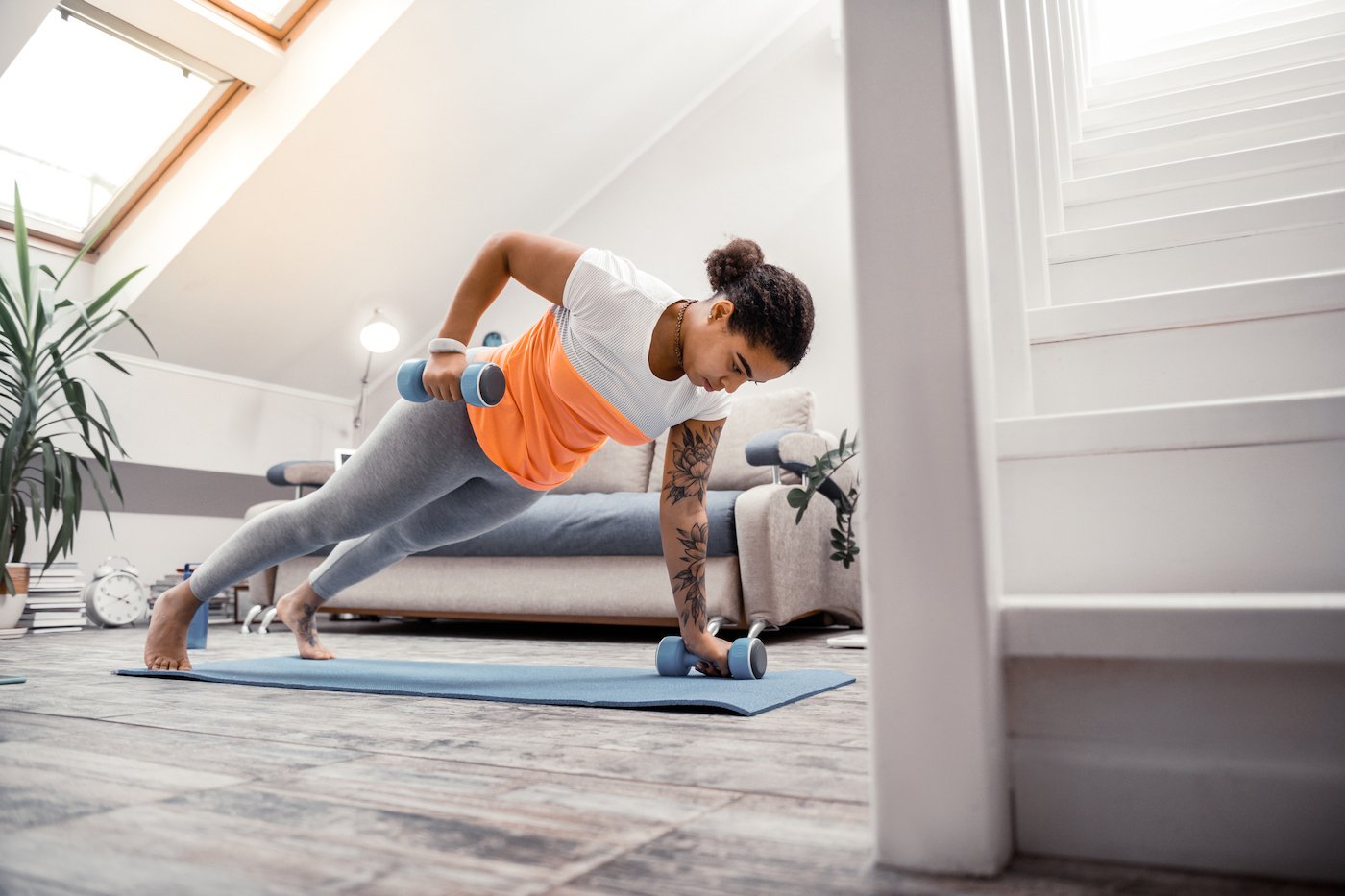 If I could be a fitness iteration of Edward Scissorhands, I’d have dumbbells attached to my wrists instead of scissors. Dumbbells are probably the most handy (get it?) and portable piece of workout equipment, and there are just endless exercises you can do with them—including working your shoulders, your back, your core, your legs, and the list goes on.

A quick history lesson: We’re pretty positive that dumbbells (or dumbbell-like objects) were used as far back as Ancient Greece. “Dating back to the days of Ancient Greece, people used [dumbbells] to sculpt their bodies so they could resemble the Gods,” says Branko Teodorovic, master trainer at FlexIt.

Though there have clearly been advancements since then, the basic idea stands the test of time. “They’re used every single day, at almost every gym worldwide,” he says, adding that though they may seem decidedly low-tech, they “offer 360-degree rotation, allowing us to position our wrists, elbows, and shoulder joints in the most favorable position.” (Pssst: That means you can work your body from head to toe, just check out this weighted HIIT workout as proof.)

Because of this, they’re incredibly effective no matter the muscle that you’re trying to work. “Dumbbells are the most effective pieces of equipment to isolate specific muscles,” says Chris Gronkowski, FlexIt master trainer and CEO of Ice Shaker. “Targeted arm exercises are single joint movements, so for example, your elbow is the hinge when both contracting and extending—so dumbbells allow you to focus on one area at a time, which can help increase your strength by overloading the muscle.”

This means they offer a wider range of exercises, variations, and sequences. And there’s a dumbbell for everyone—you can find them ranging from literally one pound all the way to over 100 pounds. For the arm exercises that’ll make use of the most versatile fitness tool, keep on scrolling.

Try this dumbbell arm workout on your own.

1. Seated dumbbell curls: For your biceps, Gronkowski likes the staple bicep curl, which can be done when seated. Sit with your torso fully upright, rotating your wrists so that your palms are facing directly in front of you, and curl both dumbbells up to your chest. “Pause briefly at the top of the movement, then slowly lower them back down to starting position,” he says. Do four sets of 10 to 15 reps.

2. Seated hammer curls: In the same position and movement as the first exercise, repeat, but with your hands facing one another throughout the move to target other areas of your bicep.

3. Standing single-arm tricep extensions: For the back of your arms, stand up straight while extending a dumbbell straight up, slightly behind your head. “Use your elbow as a hinge, lowering the dumbbell to where it’s directly behind your head,” says Gronkowski. “You should feel a good stretch in the tricep at this point.” Pause briefly, then extend the dumbbell straight back to the starting position. Make sure you’re not using your shoulder joint in the movement—only use the elbow. Do four sets of 10 to 12 reps.

4. Incline bench dumbbell long curls: While sitting on an incline bench, start with your arms extended all the way down next to your body. Curl up, and decelerate into contraction, doing three sets of 10 reps. This will work the longer parts of your bicep, according to Teodorovic.

5. Angled dumbbell bicep curls: “Lift your dumbbells as close to the body as possible, with your elbows next to your body,” he says. “Instead of going forward into a hammer curl, lift up close to the body—about 45 degrees from a straight lift,” says Teodorovic, who recommends three sets of 12 reps on each arm.

6. Reverse dumbbell curls: Work your triceps by starting with an over-grip on the dumbbells (hands on top of the weights) and lift forward. Teodorovic says to do three sets of 16 reps.

7. Incline bench dumbbell skull crushers: They may sound scary, but skull crushers are really effective for setting your triceps on fire. Gronkowski recommends these, which involve lying on an incline bench with both feet planted on the floor, and hold the dumbbells straight above your head. “Your palms should be facing one another,” he says. “Use your elbows as hinges, and lower the weights to just above your head, then press back up to the starting position.” Try four sets of around 10 reps.

8. Dumbbell kickbacks: These are also meant to target your triceps. Teodorovic says to use a flat bench, placing one knee on it and bracing with the opposite side arm for a solid base. Keep the other arm parallel to the floor—the only joint moving is the elbow, which goes from 90-degrees back to parallel with the floor. “Decelerate as you approach the parallel line, then slowly twist the wrist on the inside,” he says. Do three sets of 12 reps.

9. Dumbbell six ways: Corey Phelps, a Washington DC-based trainer, loves the “six-ways” dumbbell exercise, which targets all ranges of motion in your shoulders, your deltoids, traps, upper back, and your entire arm. “Begin with a set of dumbbells in your hands with arms at sides, palms facing in and a slight bend in the elbow,” she tells me. “Raise your arms to shoulder-height in a T-position, then move your arms in front to bring the dumbbells together, still at shoulder height. Raise dumbbells overhead, then retrace your steps backwards to starting position. From overhead, lower down in front to shoulder height, open out to the side, and lower down to the hips.” All six movements equal one rep.

If you’re traveling or just don’t have dumbbells lying around, pick up a resistance band. Bec Donlan will walk you through an arm-torching series right here:

Now that your upper body’s taken care of, try the pendulum lunge to work your legs and your balance. And this is a yoga for abs workout that only takes seven minutes.