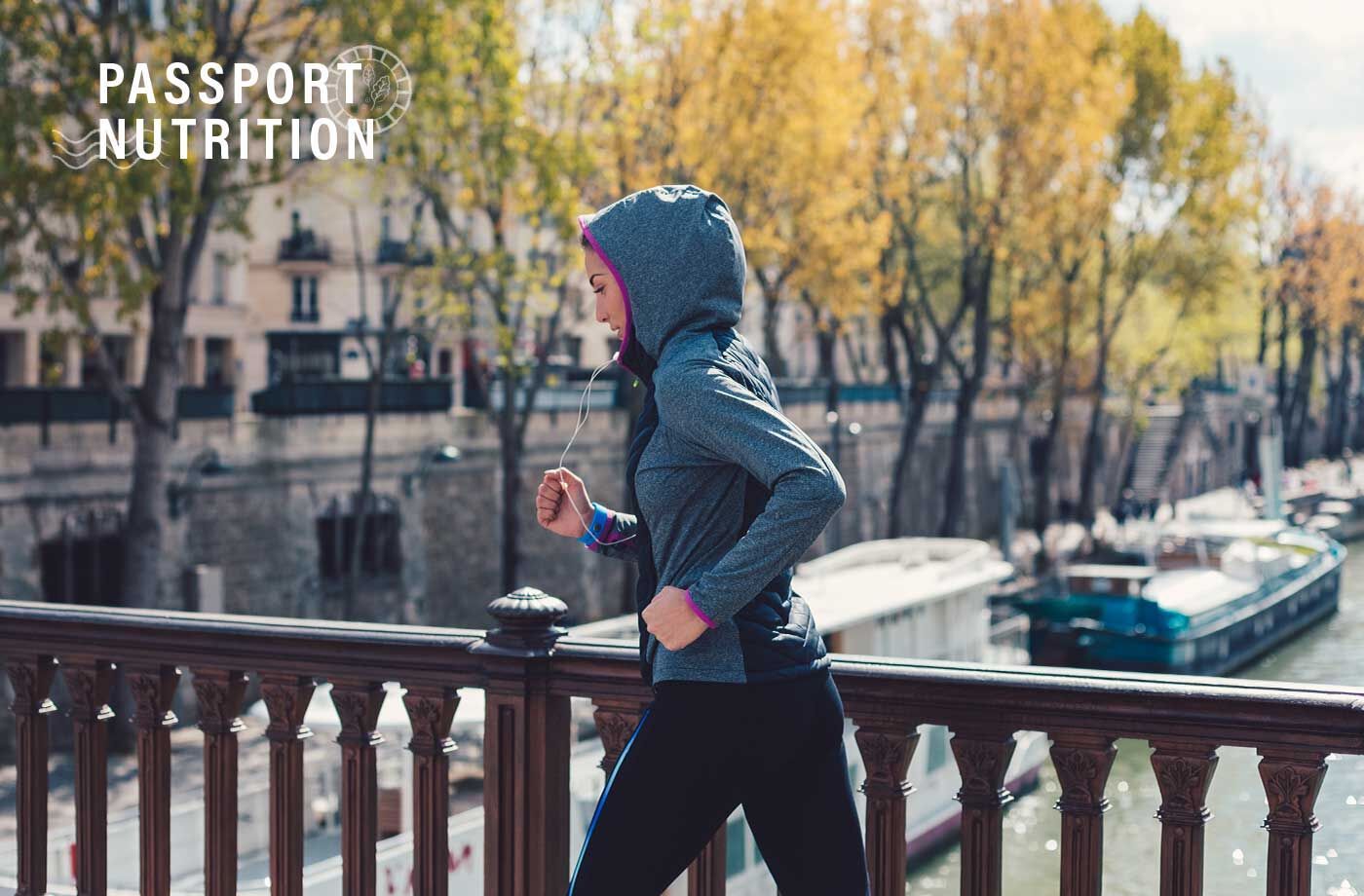 Welcome to Passport Nutrition! We’re mapping the flavors of the world one country at a time by speaking with people who wrap their careers around cuisine as well as those who simply savor an hour spent in the kitchen after work. You’ll find that a “healthy plate” isn’t one size—or country—fits all.

By the time I graduated from college, with a few school track records and All-American honors to my name, I had my nutrition dialed in. With the help of our team’s dietitian, I maintained a healthy weight while running 80 miles per week.I knew exactly what and when to eat before a key workout or race.

The meals I cooked in my apartment were fresh, colorful, and as predictable as my twice-a-day runs. My menu included bagels and oatmeal for breakfast, fruit and energy bars for snacks, turkey sandwiches for lunch, and a rotating lineup of chicken, beef, and fish for dinner. “Balance” was the giant buffalo burger I ordered at our team’s go-to spot most weekends followed by a bakery stop.

Then I traveled the world for a year.

As a three-sport athlete—cross-country, indoor track, and outdoor track—at Rice University in Houston, studying abroad wasn’t an option. By graduation, my brief introduction to other cultures had come through mission trips to Mexico and a track trip to Bydgoszcz, Poland. I left those trips feeling equal parts satiated and hungry; moved by what I’d seen and done and eager to explore even more.

As I bounced between the far-flung cities of Turku, Finland; Melbourne, Australia; and Kilmihil, Ireland, my daily routine went up in flames. Running in new places took some adjusting but my loss of control became most apparent in my eating habits. No longer could I count on that bagel with peanut butter and banana exactly three hours before a long run, nor was I often in a position to make my standard pre-workout dinner of baked chicken, brown rice, and roasted broccoli. The fueling strategies I relied on in college would clearly require some bending.

As I bounced between the far-flung cities of Turku, Finland; Melbourne, Australia; and Kilmihil, Ireland, my daily routine went up in flames.

First there were the ingredients I encountered that I never knew existed: shiso leaves in Japan, kumara in New Zealand, and lingonberries in Sweden, to name just a few. Each of them added another layer of flavor and intrigue to the otherwise familiar dishes they were served in (shiso in sushi, kumara in a vegetable medley, and lingonberries in jam). They also made me wonder what else I’d been missing by sheer lack of exposure.

I chased my curiosity to local food markets, which turned out make great introductions to any new culture. I stocked up on foreign spins of familiar staples, happily following the lead of my fellow shoppers. Especially fascinating were the high-tech scanning and check-out systems in Sweden, corner bakeries with their daily customers in Switzerland and France, and Japanese grocery stores in which most everything—even individual carrots—was packaged in plastic. Best of all were the open-air markets, in which I purchased based on scent and sample alone. I counted Tokyo’s Tsukiji Fish Market, London’s Camden Market, and Addis Ababa’s Shola Market among my favorite destinations of the year.

Experimenting with ingredients and spices was one thing, but other culinary firsts required bigger leaps of faith. The black pudding (blood sausage) my hosts served me in Ireland and haggis (liver, heart, and lungs of a sheep, traditionally stuffed in its stomach and boiled) I ordered in a Scottish pub still stand out in my mind. Neither had been part of my repertoire back home, and I was totally in the dark about their nutritional content and digestibility. Much to my delight, my stomach proved equipped to handle everything I fed it. My training kept progressing and as my experiments went on, my confidence surged.

Best of all were the open-air markets, in which I purchased based on scent and sample alone.

No experience, however, compared to the hands-on, collaborative meals in which I played sous chef to my new friends and hosts. Many of the things we cooked were regional specialties—like fondue in Switzerland, pizza in Italy, and barbecued meat in South Korea that the locals (correctly) assumed I’d want to learn to recreate back home. Others, like my lesson in injera—Ethiopia’s spongy, fermented flatbread used to mop up stews and vegetables—required specialized equipment and ingredients. I loved them all, and I recorded the recipes in two small journals along with stories of the people who shared them.

Twelve months after leaving home, I touched back down on U.S. soil with a book’s worth of insights into global running cultures, takeaways that I hoped would kickstart my career as a marathoner. (Spoiler: They did. Five months later I won my debut 26.2-mile race and officially went pro. I’m now preparing to compete in my fourth Olympic Trials this February.)

As I settled into a new daily rhythm in one place, it was apparent that I’d gained much more than the running lessons in my time overseas. I also found a broader and richer food landscape than I’d thought possible, a different way of relating to the things I consumed. As my travels taught me and my recipe journals still remind me, food can be thrilling and performance-enhancing at the very same time.

No matter what city you find yourself in, here’s how to eat for optimal energy:

More travel diaries: “Getting injured in Hawaii was the best thing that happened to my vacation” and “A 5-euro yoga class helped me feel at home while living abroad.”