What a ‘healthy plate’ looks like in 6 different countries 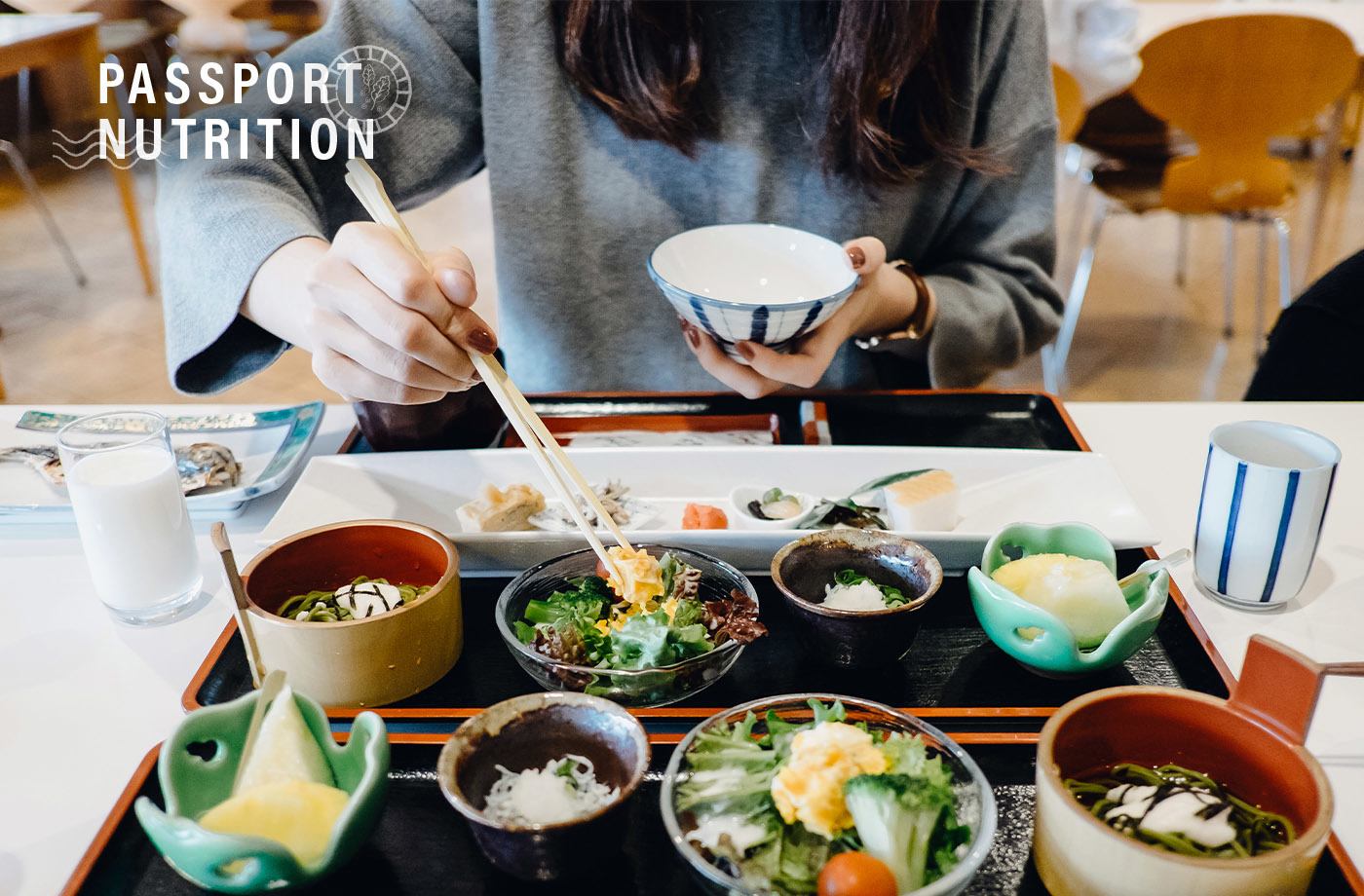 Welcome to Passport Nutrition. We’re mapping the flavors of the world one country at a time by speaking with people who wrap their careers around cuisine as well as those who simply savor an hour spent in the kitchen after work. You’ll find that a “healthy plate” isn’t one size—or country—fits all.

Looking for some inspiration to switch up your avocado toast, or just curious how other people eat elsewhere in the world? Ordinary people living in all corners of the globe have different yet sometimes strikingly similar ideas of what an extraordinarily well-rounded diet looks like. From veggie stews and raw fish to vegan lattés and gluten-free pancakes, here’s what international food looks like for six people in Japan, France, India, Martinique, Ghana, and Canada call a “healthy” meal.

“For me, healthy eating is focusing on the foods that are closely attached to your roots and eating traditional, ancestral recipes,” says Shikha Tibarewala, a nutritionist, recipe curator, and diabetic educator in Mumbai. She notes the importance of fueling your body with complete and balanced meals, which means not obsessing over any one nutrient. A typical dinner includes millet flatbread, vegetables with cottage cheese, and Indian curry made with beans and vegetables.

The pictured meal features black chana masala (curry made with black chickpeas), Dal chawal (spiced Indian lentils and rice), and kadhi (yogurt-based curry served with rice), paired with sliced cucumbers and millet flatbread, served alongside a salad starter. Tibarewala has eaten these comfort foods since childhood and still enjoys them today because they’re both simple to whip up and filling. 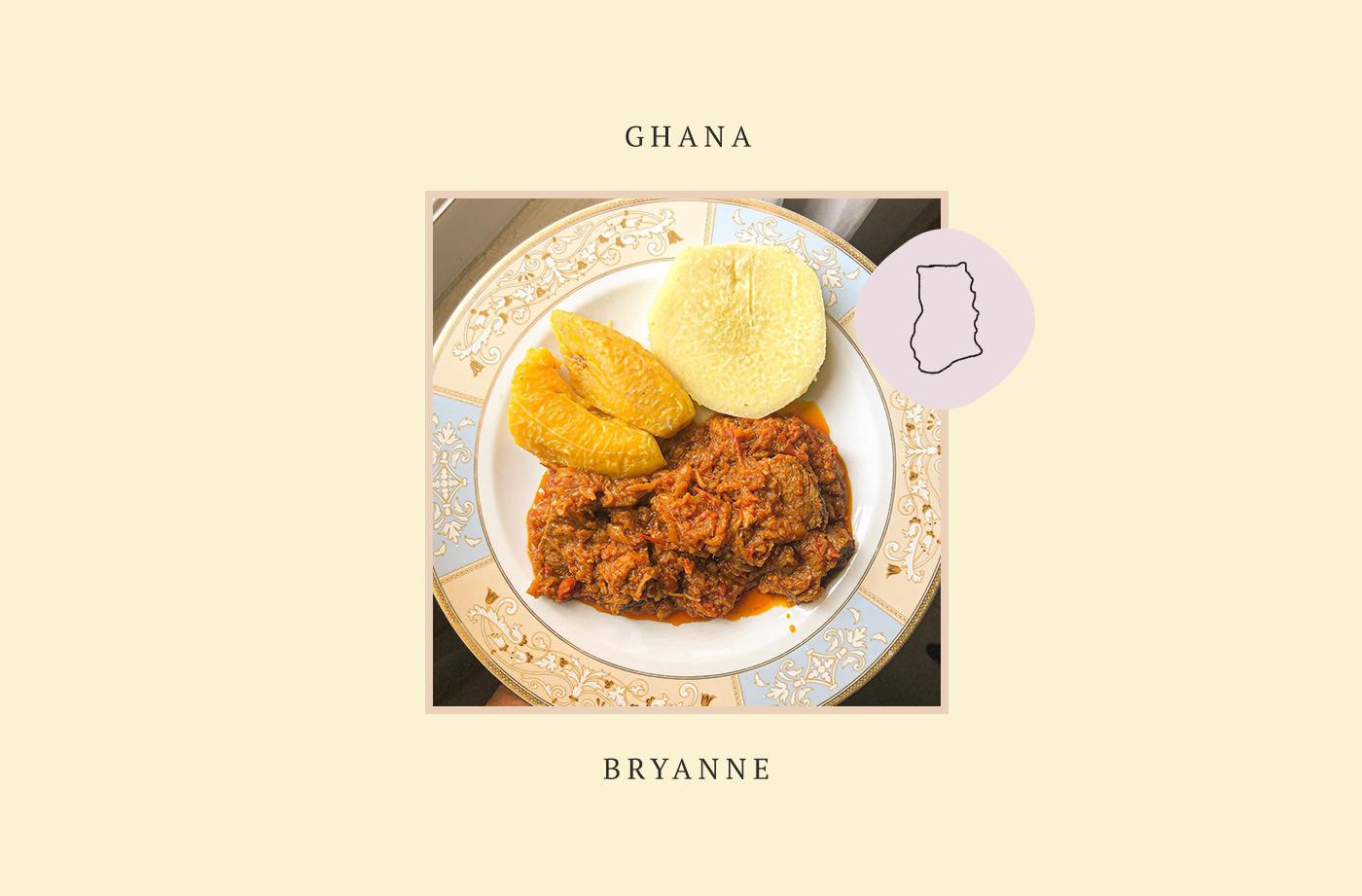 For Bryanne Hackman, a blogger at Best Body by Bry and nutrition coach in Accra, a standard lunch or dinner is all about balance: a portion of carbohydrates (rice, yam, plantain, or cassava); soup or stew made with veggies and protein (smoked mackerel, salmon, beef, or chicken); and a fresh salad or boiled vegetables on the side.

“Healthy eating to me involves intuitive eating, or listening to your body’s signals as to when it is hungry, full, and craving certain foods,” says Hackman. “It’s about having a positive mental relationship with food and understanding that it’s okay to eat cake, chocolate, or other foods you crave when you want. Your personal satisfaction and enjoyment of food is just as important as the physical benefits that you gain from foods.”

This meal features a stew made with garden egg—a type of eggplant common in tropical countries and a staple in Ghanaian cuisine—along with tomatoes, onions, palm oil, beef, and chilis, paired with a side of boiled plantains and yams. Veggies boost the fiber, which is good for digestion and keeps you fuller for longer. A fan of plant-based meals, Hackman adds that vegetables also support heart health and even reduces the risk of some cancers.

In fact, plant-based diets are catching on in Ghana, with vegan and vegetarian restaurants on the rise across Accra, says Hackman. “I would say that millennials, more than previous generations, recognize the importance of incorporating good nutrition into their lifestyles. This is in alignment with the global shift towards an emphasis on nourishing your body with more plant-based foods,” she says.

While low-carb diets like keto are popular among some Ghanaians who are trying to manage their weight, Hackman doesn’t subscribe to them. “Our diets in Ghana are rich in carbohydrates, and we tend to overindulge in this particular macronutrient group,” she says. “But most people who try this diet end up in a cycle of losing weight followed by gaining weight because they find that it’s not feasible in our local context.” In the past decade, the traditional diet in Martinique has changed a lot, says Marilène Maurielo, a real estate manager and the manager of a record production company in Fort-de-France. On this Caribbean island, an overseas region of France, 8 percent of the population has diabetes—a number that’s quadrupled in the last three decades. Locals, she says, have begun avoiding fat, sugar, and processed carbs.

A traditional Martiniquais meal is heavy on fatty sauces and sugar, dating back to the days when it was a sugar-producing French colony. A typical meal consists of fried plantains, yams, or breadfruit served with a fatty conch fricassee or pork stew. “Unfortunately, packaged yogurt, cakes, and juices are much sweeter than elsewhere, but the manufacturers are in the process of fixing that,” she says.

The pictured meal comes from a new restaurant Maurielo recently discovered that serves local fish and veggies at reasonable portions. “Almost everything is imported. Martinique food has dishes with a lot of heavy sauces,” she says. This lunch includes sea bream (a fish caught off the west coast of Africa and in the Mediterranean), Chinese cabbage, breadfruit fries (breadfruit is a potato-like fruit), and a sweet potato salad, which she says is healthy because it’s low in fat and centered around vegetables and fish sourced within a couple of days.

Maurielo, who is careful with what she eats because she’s pre-diabetic, doesn’t follow any particular diet but says that healthy eating to her is varied and heavy on vegetables, fish, meat, grains, legumes, and fruit. 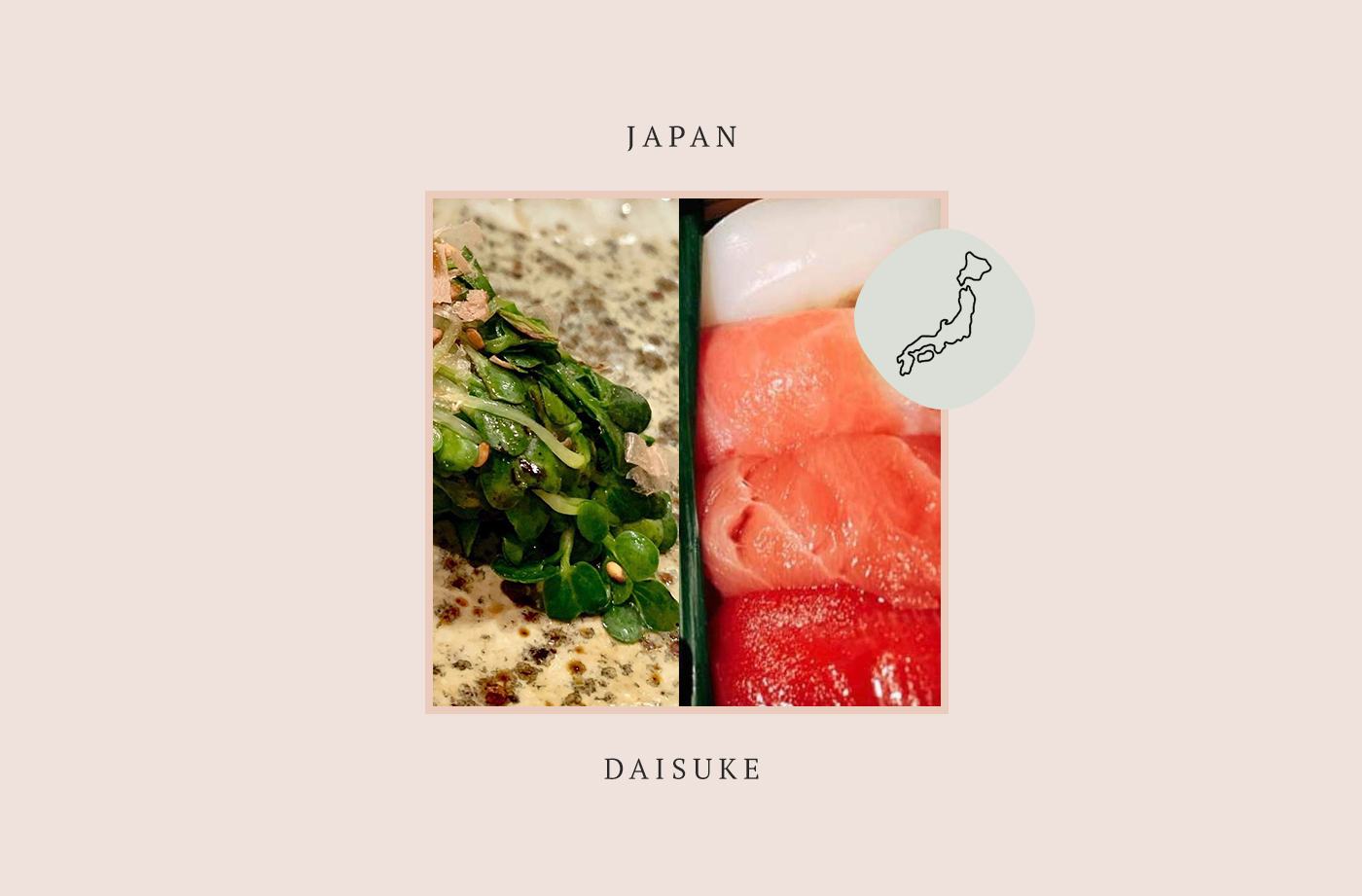 Ask any nutritionist: Fish is excellent for you, full of protein and heart-healthy omega 3 fatty acids. And most of us Americans don’t eat anywhere enough of it.

In Japan, fish is considered healthy, too—maybe even more so given the country’s changing tastes. “One hundred years ago, Japanese people ate only vegetables and fish. A lot has changed. Now we have chicken, pork, and beef,” says Daisuke Shimazaki, the owner and chef of Sushi Yuu, a high-end sushi establishment in Tokyo. “In the last 30 years, our diet has changed and become more American in style.”

Barring one or two very expensive restaurants in New York, Sushi Yuu serves up some of the tastiest raw fish I’ve ever eaten: A slab of fish that more or less hopped out of the ocean and onto your plate served atop just the right portion of sticky rice.

Shimazaki, who inherited his shop from his sushi chef father, says that while locals frequent plenty of “fast sushi” spots in train stations and malls around Japan that sell cheaper fish, the average Japanese person actually only splurges on a high-quality sushi meal about once a month. That’s because it’s quite expensive: His restaurant’s takeaway sushi lunch boxes (pictured here) sell for 6,000 yen (about $55), with full sit-down meals going for several times that price.

The sushi in this photo is representative of a typical sushi lunch in Japan and includes three types of tuna (low-fat, fattier and fattiest), salmon, squid, salmon roe, shiny kohada (a Japanese fish similar to sardine), flounder, sea urchin, bonito, and sea eel, served with pickled radishes and ginger. 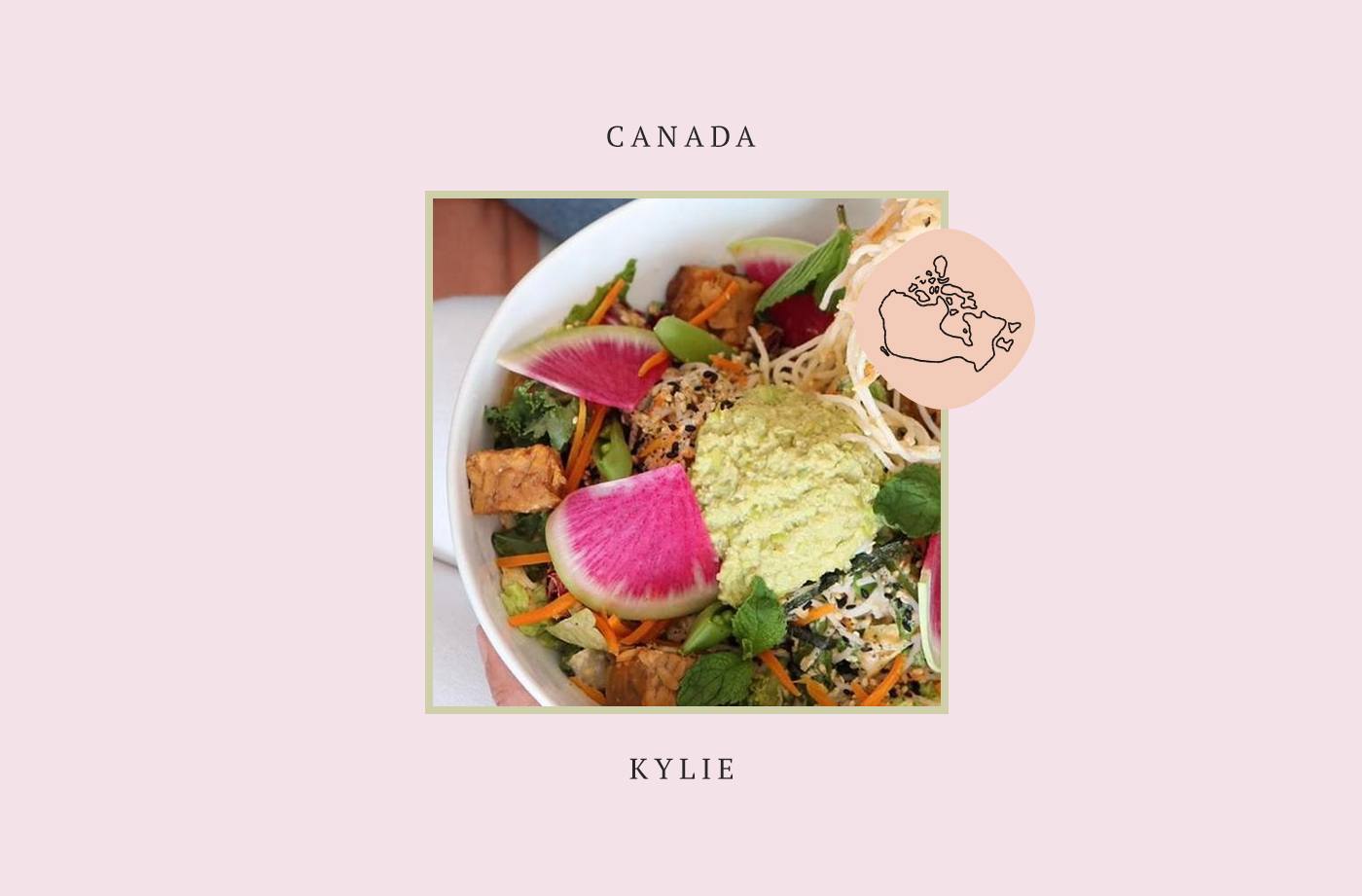 After a recent celiac disease diagnosis, Kylie McGregor, a publicist in Vancouver and the co-founder and editor-in-chief of the health and wellness website Well Daily, has gone 100 percent gluten-free. And she’s not the only Canadian: Plenty of people she knows are gluten-free or vegan. “You can see this in restaurants throughout the city, where more often than not they specify ‘GF’ and ‘V’ on the menu,” she says. “People are paying more attention to what they eat and how it makes them feel. I’ve noticed a lot of people cutting back on dairy, even if it’s just ordering an oat milk latte instead of one made with milk.”

Veggie and grain bowls like the one pictured are a typical dinner for McGregor. “It’s simple, and I find meals always taste better in a bowl,” she says. A typical meal consists of quinoa or rice topped with roasted veggies, chopped greens, tofu or an egg, and a tahini or nut butter-based dressing.

This vegan bowl from the Vancouver plant-based restaurant Kokomo is made with rice noodles, lettuce, snap peas, edamame hummus, broccoli, tempeh, watermelon radish, pickled carrot, furikake (Japanese seaweed seasoning), mint, sesame seeds, and spicy tahini sauce. McGregor says it’s healthy because it contains a variety of bright, colorful veggies, including fermented ones (tempeh and pickled carrots) for a serving of probiotics that boosts digestion. The tempeh and edamame serve up plant-based protein, and the sesame seeds in the tahini are a good source of healthy fats. “It basically has all the healthy foods you should be eating in one meal,” she says.

For McGregor, healthy eating means being conscious of the foods she puts into her body without obsessing. “I try to eat foods I know will give me energy, nutrients, and won’t be too hard on my digestion. And when I want to eat things that aren’t necessarily healthy, but that taste delicious or that I’m craving, I try to do it consciously and without guilt,” she says. 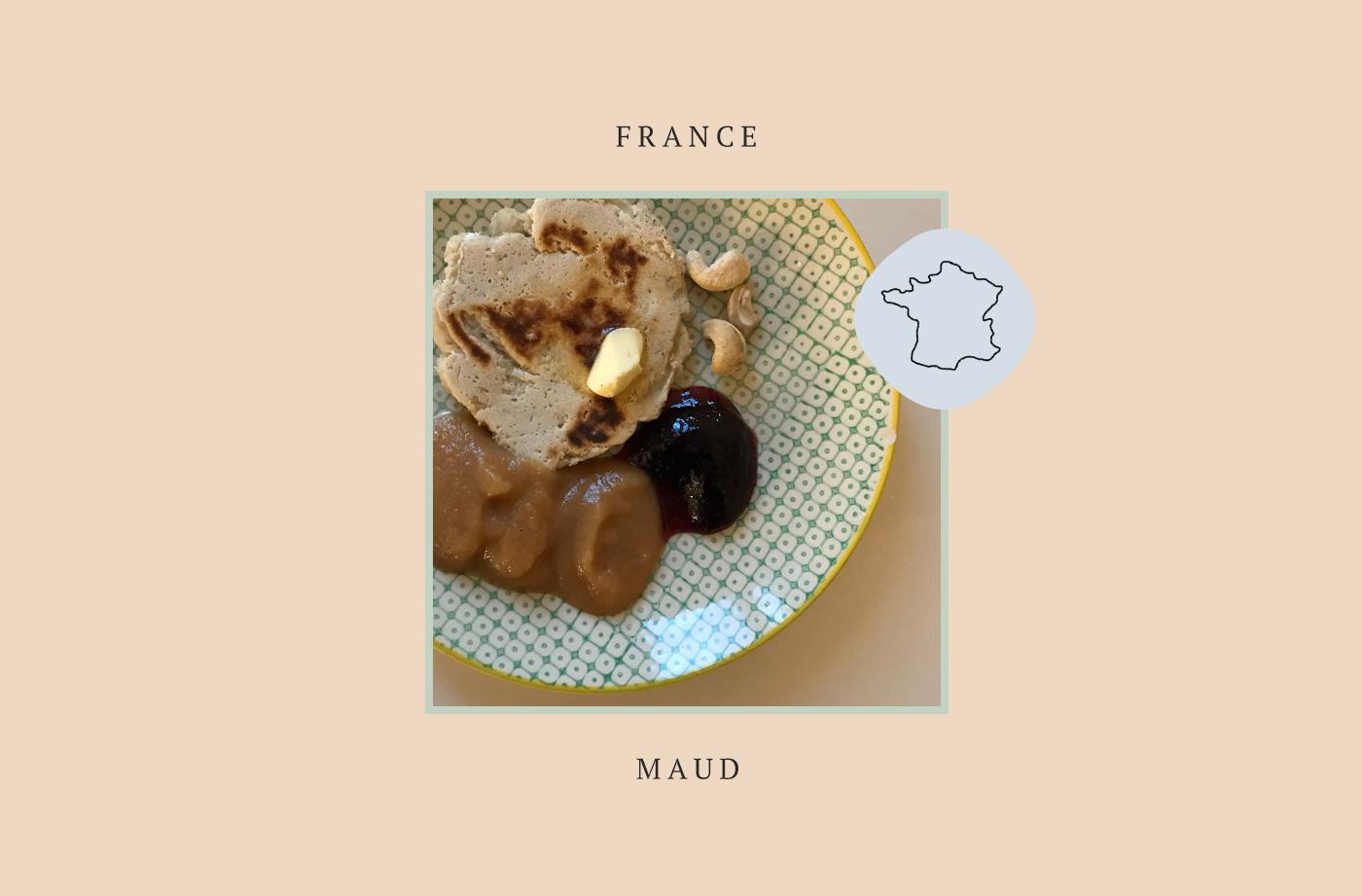 You’ve probably heard that French women don’t diet. Maud, a consultant in Paris, says that’s true… to a point. French women enjoy what they eat, and they rarely follow super-restrictive diets, she says. They do, however, eat less and avoid certain foods when they’ve had an “indulgent” weekend.

“We eat small portions. Just what we need,” says Maud.

A lot of people Maud knows try to limit gluten—and for the past six months, she has as well, because she says it makes her feel less tired. That doesn’t mean she’s completely cut carbs from her regime: baguettes made the cut, while pasta and pizza are generally off her plate. “I eat gluten in the morning if I do,” she says.

These breakfast pancakes are made using a gluten-free, high-protein pancake mix from German health brand Nu made with coconut milk and topped with cashew nuts, blueberry jam from the Alps, no sugar added apple compote, and salty butter.

“I like it because it’s delicious and healthy and feels like a splurge,” says Maud, “It’s not too heavy and almost vegan.”

Confused about gluten? Here’s what you need to know: