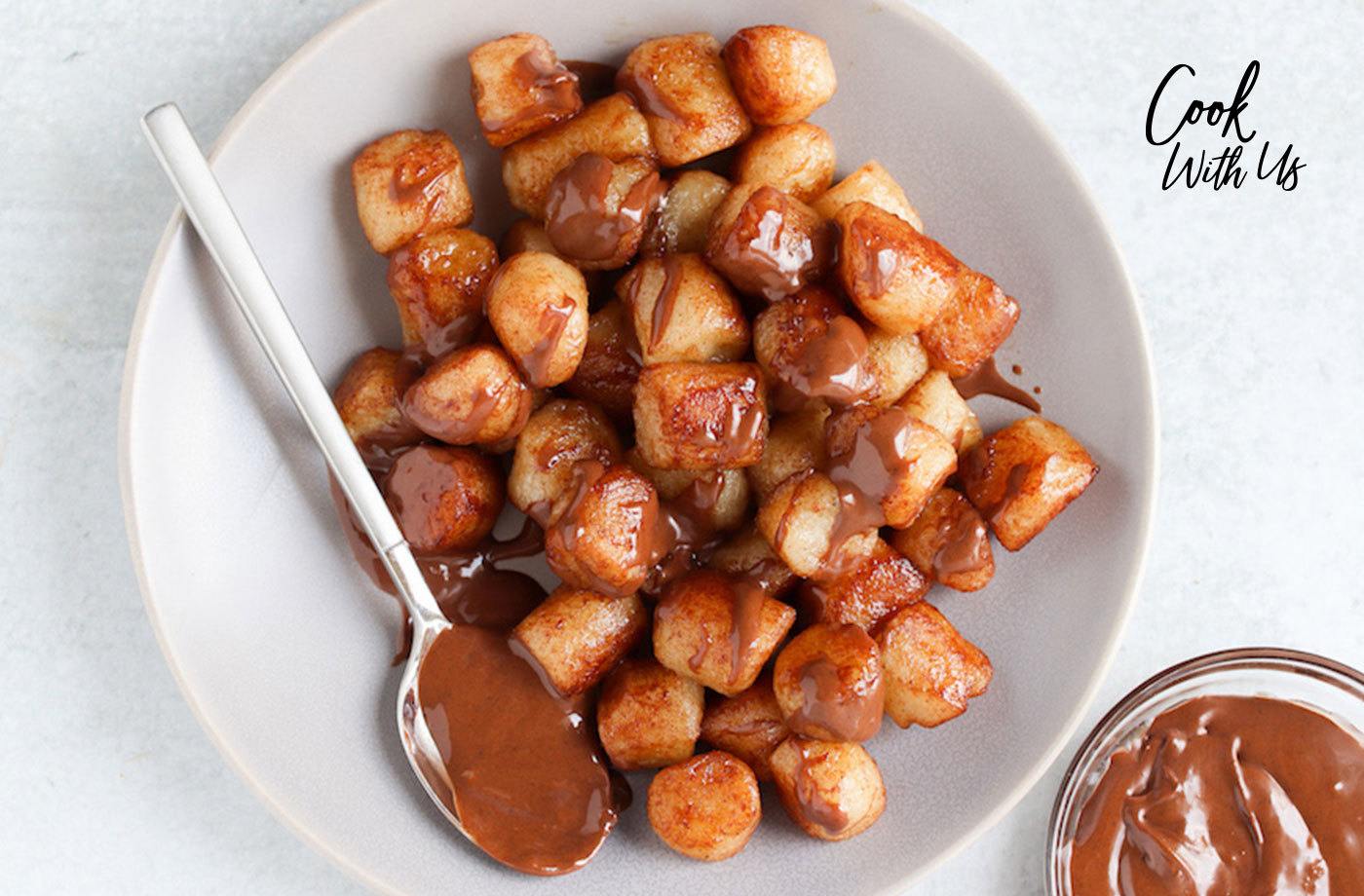 It’s safe to say that the wellness world is having a major love affair with Trader Joe’s cauliflower gnocchi. It’s all anyone can talk about. We want to see it in our IG feeds (and freezers) all the time, and eat it every night for dinner. But as with all romances, the honeymoon phase inevitably wears off. After a certain point, air-fried cauliflower gnocchi or cauli gnocchi with marinara sauce just won’t spark the same joy that they did when the relationship was fresh.

But that doesn’t mean your love affair with the TJ’s staple needs to end—it’s just time to start thinking outside the box (or in this case, frozen bag). Here, three healthy food bloggers and recipe creators share creative ways to cook with TJ’s cauliflower gnocchi that you definitely haven’t tried before. You’ll find that spark again in no time.

In this recipe, Paleo Gluten-Free Eats blogger Kayle Johnson uses cauliflower gnocchi as the starring ingredient for a casserole that works as a breakfast *or* dinner dish. “I love creating new recipes that I haven’t seen before and I love warming casseroles, so I thought this would be a great way to make an easy family [meal] in one dish with an ingredient I knew I already loved—cauliflower gnocchi,” she says.

Along with the gnocchi, the dish features broccoli, eggs, and chicken sausage. Johnson then uses coconut milk to give the casserole its creamy filling (since the Paleo diet prohibits dairy), which secures the dish’s comfort food status. “[Coconut milk is] so thick and creamy and reminds me of traditional cream, so it’s a great swap in savory or sweet dishes.” Arrowroot flour also helps thicken the sauce and Johnson says it helps pull all the ingredients together.

Her pro tip to keep in mind when making this dish: “If you want the crispiness on your gnocchi, then add a little oil when cooking and you will get that nice golden brown on the outsides.”

One food you surely haven’t paired with your cauliflower gnocchi: grapefruit, which Hunger Thirst Play blogger Lauren Pariseau uses as the main ingredient in her pesto. It seems like an odd combo, but Pariseau says it adds unexpected brightness to an otherwise hearty dish. “I love the addition of citrus into pasta sauces that aren’t red sauces and I was on a huge grapefruit kick at that time,” Pariseau says on how she came up with the recipe. She also decided to use pecans instead of pine nuts, which are traditionally found in pestos. “Pecans tend to have more of a natural sweetness which balances the tartness of the grapefruit,” she says.

Cauliflower gnocchi love to stick to the pan (and each other) when cooking, but Pariseau says you can mitigate that by separating them before adding to the pan. She also adds that the big secret to taking this dish to the next level is topping the dish with balsamic vinegar and burrata cheese for a finishing touch. “It’s a little pricey but an aged balsamic tends to be a little thicker and a touch sweeter, so it’s perfect for adding just a little sweetness,” she says.

If you’re sick of savory Trader Joe’s cauliflower gnocchi recipes, prepare yourself for this sweet version. Not only is this dessert delicious and healthy, it only requires five ingredients. “I have come to realize that cauliflower gnocchi—and cauliflower in general—is so versatile. It tastes like whatever you cook it in,” Spinach 4 Breakfast co-blogger Maria Tosoni says. “I love making cinnamon sugar bananas to put on top of my toast or oatmeal, so I figured I would try the same recipe with the cauliflower gnocchi. And it turned out great.”

Tosoni chose to use coconut sugar instead of traditional white sugar to make her dessert. “I have no problem incorporating sugar into my diet in moderation, and coconut sugar tastes very similar to brown sugar. It gives this recipe a rich, almost caramel-like taste,” she says. (Doesn’t hurt that it’s a prebiotic and a lower glycemic index food than the regular stuff, too.)

She says you should ignore the cooking directions on the packaging and try her technique instead. “Take the frozen gnocchi out of the bag and place it onto a plate. Microwave it for 45 seconds,” she says. “Add a drizzle of oil—coconut oil or butter—to a pan over medium heat and then add the gnocchi in a single layer. The next important tip is to not move the gnocchi around, although it’s tempting. Allow it to simmer in the oil until it browns on one side, and then flip and do the same on the other side. Once both sides are browned, you can give it a final toss.” Dessert is served.

Join Well+Good’s Cook With Us Facebook group for more healthy cooking inspo. Plus, check out how Trader Joe’s cauliflower gnocchi compares to Green Giant’s, both in terms of taste and nutrition.