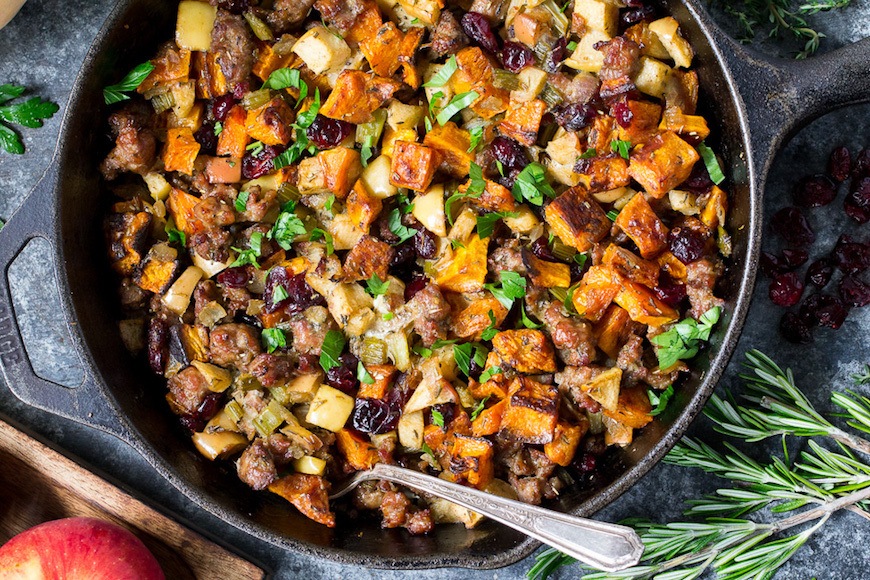 As iconic as turkey is to the Thanksgiving spread, everyone knows the side dishes are really the stars—and stuffing is often the dish people get excited about the most. (Sorry, green bean casserole.) Traditionally, stuffing is bread-based, which is a major bummer to GF eaters. But cubing loaves of bread certainly isn’t the only way to make the classic holiday dish, and dare I say, it’s not even the tastiest.

Don’t believe me? Check out these seven unique, gluten-free takes on Thanksgiving stuffing, which both traditionalists and GF eaters will enjoy. Many even check other boxes, such as being Paleo, Whole30, vegetarian, or dairy-free. So no matter what the dietary needs are for your Turkey Day meal, you’re sure to find a recipe that will have everyone around the table reaching for seconds.

If you’re set on making bread-based stuffing but are looking for a gluten-free way to do it, the most straight-forward trick is using a loaf of GF bread to cube, as this recipe from Lexi’s Clean Kitchen does. It calls for the same ingredients you’ll find in traditional stuffing recipes too, such as thyme, carrots, mushrooms, and celery.

If you’re from the South, chances are you already use cornbread as a base for your Thanksgiving stuffing. This recipe shows how to whip the cornbread up the GF way (using oat flour, cornmeal, and eggs), and then incorporates ingredients such as vegetarian broth, dried cranberries, walnuts, and onion for the perfect southern stuffing.

This stuffing recipe is both vegan *and* gluten-free. The key to keeping the classing Thanksgiving stuffing flavor despite the rice is by incorporating vegetable broth, celery, sage, thyme, cranberries, and pecans. It’s outside of the box without being too untraditional.

The trick to giving Thanksgiving stuffing an Italian twist: adding sausage and Parmesan cheese. This recipe does exactly that, without adding any gluten into the mix. (It uses GF hot dog buns cubed and mixed with olive oil and poultry seasoning.)

This recipe is both Paleo and Whole30-approved thanks to the butternut squash in place of bread (or GF bread). While it’s a bit different from the stuffing you may have grown up with, the cranberries, celery, and onion ground it enough to prevent it from tasting like an entirely new dish.

For a stuffing recipe that’s more fiber-packed than the original, give this vegetable-forward take a try. Using vegetable broth or almond milk gives the creamy texture while keeping the recipe vegan. And of course it’s entirely GF.

Most stuffing recipes call for carrots, onion, and celery, but this one really ups the fiber by including kale in the mix. Oh, and as for the ghee? It’s the secret weapon to making the GF bread extra flavorful.

Now that you have the stuffing covered, check out these Thanksgiving salad recipes. Plus, your day-by-day guide to getting all the cooking done.