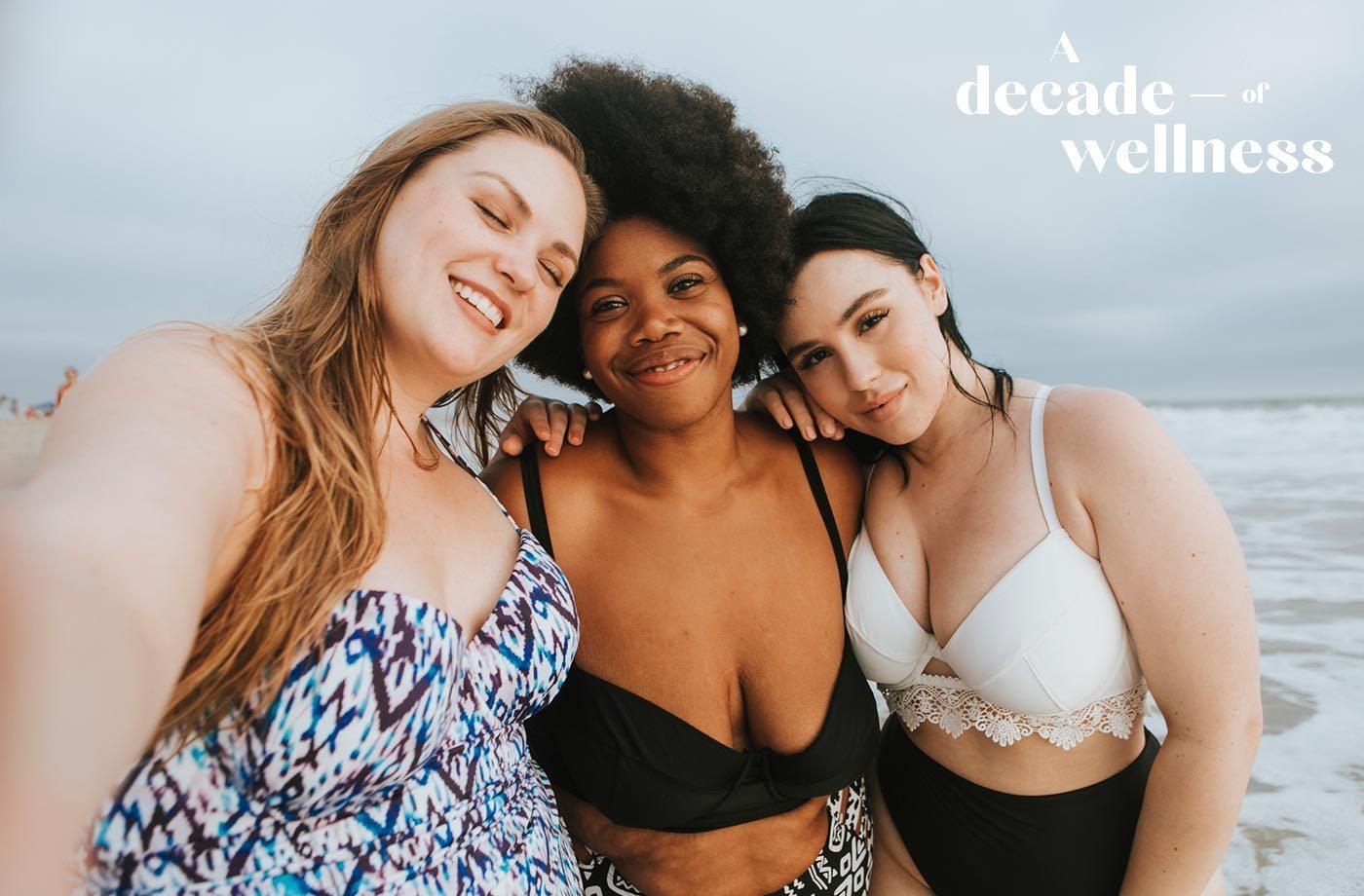 In the days before you could order both groceries and magazine subscriptions online, it was damn near impossible to walk through a supermarket checkout line without seeing the term “bikini body” plastered on glossies at the newsstand. By today’s standards, strapping two pieces of material onto any body fits the bill, but a decade ago, the term was still reserved for only those with six-pack abs and not an inch of perceived bodily “imperfection” in sight.

The definition was so narrow, the ideal so unattainable, that when actress and runway model Kate Upton appeared in a bikini on her first Sports Illustrated Swimsuit cover in 2012, people straight-up called her fat. Fast forward five years to when she appeared on the magazine’s cover again in 2017—a year after Ashley Graham became the first curve model to cover the issue—and that same body was criticized for not being “diverse enough,” proving just how much our definition of the “bikini body” has changed for the better over the last 10 years.

Sports Illustrated isn’t alone in broadening the loaded term’s definition: Major magazines have banned it (for what it’s worth, at Well+Good we’ve never used it unless the words “every body is a” were out in front), the Victoria Secret fashion show is dead, and heck, even Barbie got a body-positive reboot. “It was a ridiculous notion that you couldn’t be considered beach-worthy or ‘bathing suit-worthy’ or beautiful in general because you didn’t fit into one particular category that who-even-knows-who identified as being optimal,” says Sports Illustrated swimsuit editor MJ Day, who has been a champion of inclusivity for the magazine’s annual issue. “We have to work to get to a place where we empower people to find their own individual ‘bikini body,’ and it doesn’t need to be what one person says you need to look like.”

The fitness industry, which for many years ran on these outdated ideals, has had to play catch up, and so, the idea of wellness instead of weight loss has begun to infiltrate the conversation around nutrition and exercise. And, in case our own endorphins weren’t proof enough, evidence is mounting that there are plenty of reasons to exercise that have nothing to do with physical appearance: Cortisol-conscious workouts focused on reducing stress are on the rise, and studies have shown that the mental benefits of exercise can help with mental health issues including anxiety and depression.

Want real-life proof? Australian personal trainer Kayla Itsines launched her “Bikini Body Guide” program in 2014, but later said that she “regretted” the name she chose, and when she released her app in 2015, she rebranded it as “Sweat with Kayla” because “sweat is so empowering” (though, it’s worth noting, the “Bikini Body” name is still prominently featured on her website). Blink Fitness, which has 90 locations across the United States, has used the phrase “mood over muscle” along with body diverse imagery since 2011. And in late 2018, Weight Watchers rebranded to WW—short for “Wellness that Works”—evidencing a larger trend toward a focus on health rather than weight loss as the most important side effect of a balanced eating plan and exercise regimen.

Still, the relationship between body image and the fitness world is hardly a perfect one. Just as “clean eating” and “metabolism-boosting” have become industry-accepted, yet problematic, ways to talk about food,  fitness brands have their own methods of wellness-washing. Terms like “toning,” “sculpting,” and “chiseling” are a thinly veiled way for them to rebrand the same old weight loss crap we’ve been dealing with for decades, and the “transformation photos” that pervade social media still inherently imply that one type of body (usually smaller, more muscular) is better than another.

And yet, that’s not always the case on the ‘gram. One of the most positive changes of the last decade is that the women we’re turning to for #fitspo no longer subscribe to a single shape and size. Jessamyn Stanley’s self-proclaimed “fat, black, flexible body” has shown her hundreds of thousands of followers that the “yoga body,” just like the “bikini body,” comes in many shapes and sizes. And in 2019, curve model and Sports Illustrated swimsuit star Hunter McGrady teamed up with plus-sized influencer Katie Sturino to launch “Babe Body,” a growing fitness platform that hosts events designed to make women of all sizes feel comfortable working out. “A lot of people have this preconceived idea that plus-sized women don’t want anything to do with fitness… we’ve been so brainwashed to believe that our bodies look this way because of laziness and it’s complete bullshit,” says McGrady. “And that’s why we started Babe Body…You shouldn’t have to step into a class and feel like you can’t measure up.”

Not only do women of all sizes deserve to feel comfortable working out, but they also deserve to feel cute while doing it—and activewear brands have finally stepped up to the plate. Gone are the days, as McGrady recalls them, of having to wear oversized men’s gym shorts and ratty t-shirts to your workout because size 16 leggings simply didn’t exist. Nike introduced its extended size range in 2017 (and later displayed it on plus-sized mannequins in a much-applauded move toward representation), and Alala, Adidas, and Beyond Yoga have all followed suit in the years since.

More significantly, though, new brands like Girlfriend Collective, Universal Standard, and Good American launched with a fuller range of sizes available from the get-go, treating inclusivity as a part of their ethos instead of as an afterthought. “[People] make all of these assumptions about what this customer wants—that she only wants certain styles or that she ‘can’t be fitness interested’ or isn’t taking fitness seriously, but in my experience as a woman with friends of all different sizes, [that’s not true],” says Good American co-founder Emma Grede. “It’s all of these preconceived notions that are stopping brands and retailers from reacting to what’s really needed, but for us it was a really easy decision.”

Despite all of the progress we’ve made, there’s still a long way to go. For every gym advertisement worth applauding, there are at least three more that look like six-pack filled orgies, and for every brand that has a selection of leggings available in size 5X, there are plenty of others who still, unbelievably, don’t. And this messaging is still doing plenty of damage says Vivian Diller, PhD, a psychologist who specializes in body image. “The constant knock-down of one’s self image by hearing terms the imply body perfection makes it hard to feel good about a healthy, but ‘imperfect’ [by societal standards], body,” she says.

“The number one question I get asked all the time is, ‘Do you think we’ve reached inclusivity?’ And the answer is ‘No,’” says McGrady, adding that the fitness industry is still, in many ways, lagging behind. “But I think any time the conversation of inclusivity can move forward it is a huge factor, and we need bigger brands and media outlets to take that stand together.” This recognition is a good first step, but we’re hopeful that the decade ahead sees even more progress. “I’m seeing women proud of what they look like, who are so confident and proud of themselves and putting themselves out there in ways that you never would have seen 20 years ago,” says Day. “And that’s progress.”

Over the course of the past decade, we’ve also seen yoga find its stride and our thinking towards sun protection has seen a huge improvement.