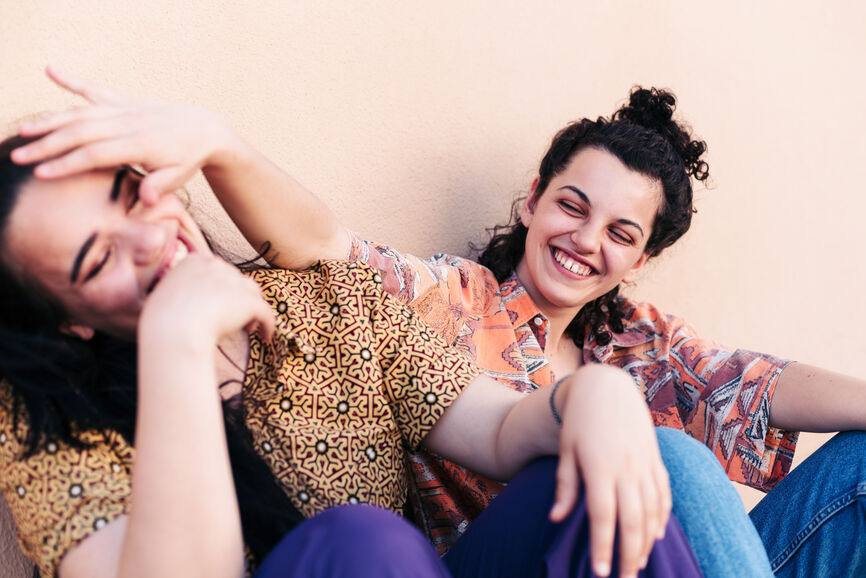 Dramatic queen seeks switchy nerd. Enby DJ seeks chill lover. Insatiable bottom 4 masochistic top. Gay cowboy for makeouts. These one-liners, without a doubt, tell you more about who someone is and what they’re looking for than a photo of them holding a fish or making kissy-face in the bathroom mirror. And herein lies the point of the recently launched “texts first, selfies second” dating app for lesbians, bisexuals, asexuals, queer folks, womxn and trans, genderqueer, intersex, two-spirit, and non-binary people interested in meeting lovers and friends: Lex.

Inspired by old-school newspaper personal ads, the idea of Lex is to swap snapshot swiping with blurb-reading. The brainchild of Kell Rakowski, Lex first lived for a few years on Instagram under the handle @_personals_ (which has since been changed to @Lex.app). Here, Rakowski and a small team posted over 10,000 user-submitted personal ads (like this one and this one), linking to posters’ IG accounts so interested muses could slide into their DMs.

While Personals was a major success, introducing folks who later went to sext/sex/date/love/marry, the number of submissions overwhelmed the account. So, the concept platform-hopped in early November, and now lives full-time as an app (which is available for download on iPhone and Android).

Personal ads aren’t exclusively a #queerthing, but as sex educator and pleasure advocate Lateef Taylor explains, the personal ads in the back of magazines like the The Village Voice and On Our Backs played a huge role in LGBTQ+ coupling and copulating in the 1980s and ’90s. “Now those magazines are out of print, and even the personal ad section of Craigslist is gone. So the personal ad format of Lex creates an intergenerational experience,” says Taylor. “Folks who are new to the queer community get a taste of queer history and folks who remember those ads get to feel nostalgic.”

“It was pretty cool for me to be able to post an ad that was so similar to the ones I’ve helped archive in college,” says Hannah B., 25, a Lex app user who majored in archival studies in college.

The personal ads posted on Lex are in conversation with the personal ads from decades past. “It doesn’t make you feel like you’re on some iteration of an app made for straight folks,” says Taylor. “You know that when you go on Lex you’re speaking to a community that you’re apart of, on a platform made just for you.” Makes sense. At a time when so many queer spaces are closing, the idea of honoring queer history feels especially important.

“In a time when most dating is based off of visual cues, it’s pretty damn revolutionary to force people to interrogate and put into words what they’re looking for in the present moment,” says Taylor. Playing “hot or not” requires way less introspection that writing up a 300 words required to create a profile on the Lex app.

LGBTQ+ matchmaker Kara Laricks with  Three Day Rule agrees, adding: “I love the fact that Lex forces daters to slow down, and spend twice or even three times the amount of time considering someone before scrolling past.” It encourages more thoughtful swiping, she says.

I found love in a lo-fi space

The question of course is will people use it, and early signs point to yes. When I posted about Lex to my modest following on Instagram, 31 queer folks slid into my DM’s with some variation of “!!! yes.” Currently Lex has over 12,000 active ads. And even more ad-voyeurs—people are looking at other people’s ads, but not posting their own. Kacey C., 24, and Bee B., 29, for instance, both say they’ve been responding to ads on Lex for as long as it’s been out, but neither have posted their own ad.

“I messaged someone who made an Anne Lister reference in their ad. We never met in person but we had a few steamy sext-text sessions,” says Bee. “And I’ve been talking to someone new I’m supposed to get coffee with next weekend.”

Kacey, who is non-binary and uses they/them pronouns, had a slightly more disappointing experience. After another user wrote in her ad that she was a cheese monger and wanted to make her a charcuterie board, “I swooned and messaged her,” they tell me. “We hit it off via text, but then we met up in person and we were on completely different pages. She told me she didn’t get why someone would use they/them pronouns and that I should just use she/her instead.”

Kacey says they’re still on the app, though. “The issue was with the TERF [trans exclusionary radical feminist] I messaged not the app itself,” they say. “With the ‘All Are Welcome Here’ banner at the top of the app and rules of conduct page, I do think Lex does as much as they can to minimize that kind of nonsense.”

“Okay, but am I sporty dyke seeking same or a muscle-sculpted cutie seeking a country boi?“ I ask Taylor jokingly. but as someone who writes for work, writing a pithy personal ad is trickier than I thought it would be. Em G., 32, agrees with this sentiment: “I want to post! I just don’t know whether or not to highlight the fact that I’m femme, a witch, a bratty bottom, a cat-Mom, a book-lover, a Libra.”

“It doesn’t surprise me that people might have a hard time finding the language to describe themselves and what they’re looking for,” says Taylor. “It’s not something people—especially queer people—get much practice with.” Start by asking your closest friends: “What adjectives would you use to describe me?” or “What should someone know about me before going on a date with me?”

Don’t get too hung up on identity words like femme, dyke, butch, top, bottom, etc, if they don’t fit quite right. Instead stick to words that do fit. If you’re a gardener call yourself a gardener. If you broker huge deals and that’s important to you, say that. If you’re the life of the party, let the people know!

Oh, unlike printed personal ads of yesteryear, ads on the Lex app only stay active for 30 days—and can be edited at any time. Plus, I’ll go ahead and say my soulmate won’t fault me for  calling myself a “CrossFit cutie” instead of a “muscle-clad femme.”

Try these tips for finding queer love offline. And find some places you might find love without your phone.