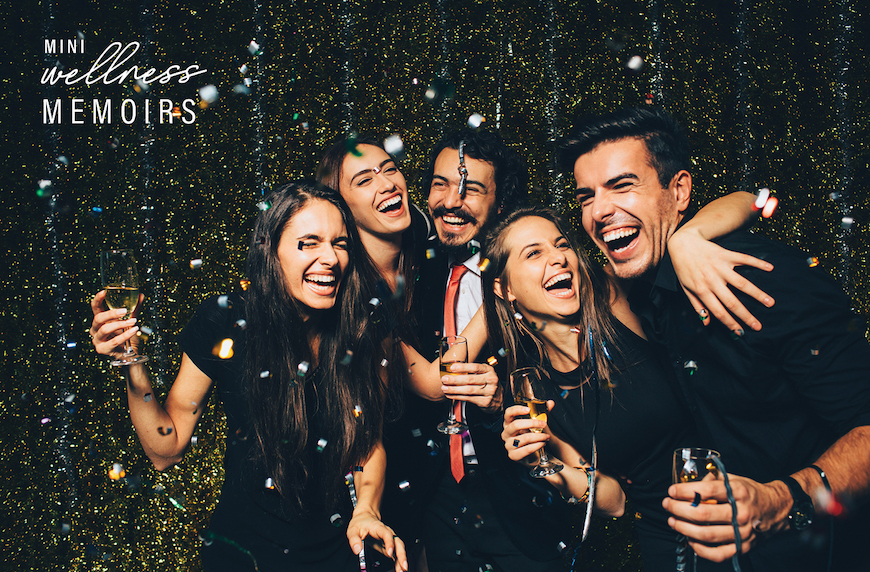 We rolled up in Sonia’s mom’s minivan, driven by Sonia’s little sister, which simultaneously made me feel teenage and ancient. In reality, I am 28. The Romy and Michelle year. The Grosse Pointe Blank year. The year pop culture declares you show up to your high school reunion Full Adult and dressed to impress. And granted, 28-year-old me had her gameface on. But my inner 18-year-old, with her yellow bangs, combat boots, and grandma cardigans was like, “You sure you want to do this?”

I rebelled to everything, as long as it wasn’t challenging. I felt so inherently different than my classmates that I shut them out. Like, ACTIVELY. I mean, even my friends rocking liberty spikes and mohawks joined the powderpuff team. But I was a committed Misery Chick, running with this idea that I was “strange” and it would be easier to reject my classmates before they rejected me.

I was so preoccupied with being an outsider that I skipped senior prom and, yes, I know it was just a lot of barely legal teens wearing Jovani gowns and grinding to “Gasolina.” But I instantly regretted that. And so, my 10 year reunion became a big, exalted metaphorical make-up quiz. I needed to be Peak Mary Grace, or I could not go.

You understand, right? Growing up, I saw a high reunion was the one opportunity to catch up with classmates and (hopefully) debut a glow-up that started the second you get to college (because all weird kids “thrive in college.”) But I graduated in the middle of the recession and the dawn of Facebook, Instagram, etc. To condense my decade: here I am, eating cupcakes for breakfast, writing Disney Princess listicles to pay off my student loans. Meanwhile the social media grapevine lets me know in realtime which classmates are thriving on a mythological, “how is that even possible” level. Traveling! Marriage! Real Estate! Health Insurance!

And I realized that I didn’t hate the life that I’d built, from my messy apartment in Greenpoint to [gestures broadly] working at the coolest place in the world. I’m recently single, which I don’t love, but my breasts amped up two cup sizes since high school; I’ll be fine. The reunion loomed and my confidence had grown to at least be on-the-fence about going… but that latent, regressive teenage self still needed some convincing. Was I impressive enough to show face, and was $50 really worth the price of a top-shelf open bar?

The month of the reunion I brought it up to my properly accomplished friend Sonia, who was being peer pressured by mutual friends. And she was on the fence. Maybe more-so about the $50 admission, but two uncertainties made the decision pretty clear: “Honestly, if you go I’ll go.”

And then I was at The Downtown in Red Bank, New Jersey

The first five seconds of walking into my reunion squad deep I was a confused, befuddled mess. At the sixth second I saw Lisa Yan, a universally beloved classmate (even by me), and realized this was going to be okay. After loopholing around the “no shots allowed” rule at the bar with a bunch of fellow ’09ers (tequila on the rocks are totally fine), we made our way to the photo booth. “You need the crown, Mary Grace,” my friends said.”Yeah, the crown is yours.”

The rest of the night is remembered in happy little snippets, a Gimlet-induced haze. My art teacher, of all people, stopped by and talked about how I was always “so ahead of my time” with my sense of style. I had genuine conversations with classmates that felt easy, even jovial. They asked me if I was still “doing the journalist thing” which betrays that we all keep tabs on our classmates, and laughed good-naturedly about how I was “way more outgoing than I was in high school.”

The weirdest part, though, was that everyone knew my name. Everyone. Every hug, of which there were many, was complimented by “Hi Mary Grace.” I thought graduating to a Big Girl haircut would’ve made me unrecognizable. Instead, people not only knew me, but naturally veered to the side of being kind and inclusive. They shared their own reservations about showing up, but overcame their inner 18-year-old as well.

So pop culture had betrayed me (in a good way).

Although I’m not about to move back to Jersey and marry some overlooked high school crush, Hallmark-style. I’m always going to feel different in a crowd, that’s who I am. But it was very weird to learn that the person who was the most unkind to me in high school and beyond was… me. There was no need to be so miserable! Ever! It was so teenage to isolate myself and play the villain because of my own puddle deep self-esteem. It shouldn’t have taken until the death rattle of the decade to realize this, but it’s comforting that I still have the capacity to grow.

And if you’re feeling insecure about an upcoming reunion or any number of social-comparison traps, let me offer this. If you’re openhearted and authentic, people are usually pretty cool. And in interest of authenticity, I’m good with being mid-level successful, with a life that is Literally Fine. I’m on a weird and highly imperfect journey, and the only thing I’m certain will happen next is, you know, life.

Oh, and maybe a 20-year reunion. I’m looking forward to that one. Just, if I can make a suggestion: no need for liquor to be top shelf, and please provide more than chips and pita. I almost had a very high school experience in Sonia’s mom’s minivan.

Looking to bond? Here’s why nostalgia can be a powerful unifier among groups. And if you want to really kick it old school, friendship bracelets are now back in vogue as a mindfulness practice.