The psychological reason why you can’t stop watching cooking shows 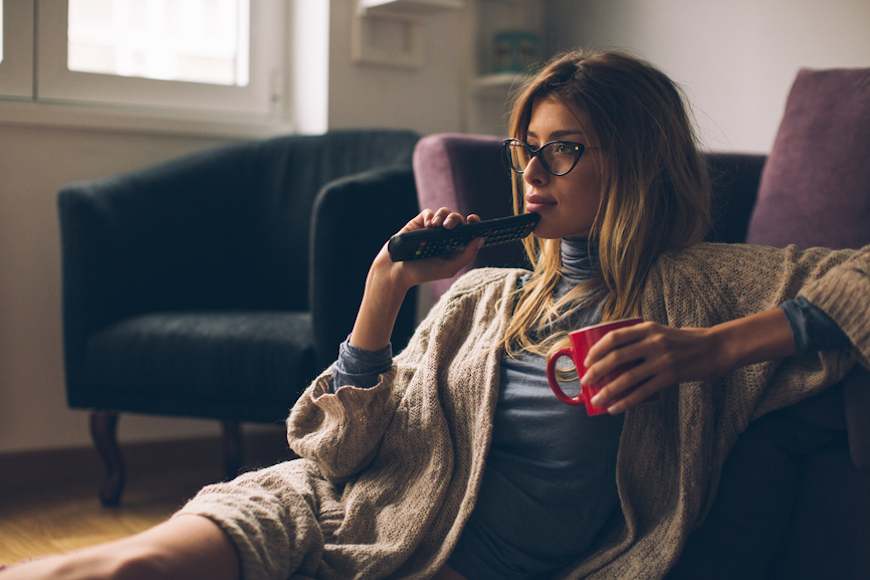 Every time I go to my local nail salon, the communal TV is turned to The Food Network. As the technicians work away, massaging hands and painting nails, all eyes seem to be casually focused on Ann Marie Drummond making a farmers’ market breakfast or an old rerun of Chopped. It’s like a trance has come over the room, hypnotized by the bread kneading, egg whisking, and vegetable sautéing happening on screen.

For some, culinary shows are a sort of ever-present background noise; not actively watched but somehow always “on.” But for others, it’s a passionate interest. Just look at the take-off of The Great British Baking Show. While Netflix famously doesn’t share viewership, the UK series has over a million likes on Facebook and countless Reddit threads devoted to its episodes. Then there’s Masterchef, the cooking competition show which has been so successful that it inspired a spin-off, Masterchef Junior, showcasing tweens who can soufflé and sous vide better than you can.

Whether it’s a tutorial or competition, it’s clear that watching other people cook is enjoyable for millions—whether they are active in their own kitchens or not. It’s a bit of a conundrum: You’re watching mouth-watering meals come together without the joy of getting to eat them. When you think about it, it should be torturous, like someone placing a plate of homemade pancakes just out of reach. But it’s not. Why is that?

The reason why culinary shows are so comforting and enjoyable hasn’t been scientifically studied (the quest to cure cancer does come at a cost), but Secrets From Eating Lab author Traci Mann, Ph.D, a professor of social and health psychology at the University of Minnesota, has some thoughts. “When watching a food show, you get to see a project come together from start to finish, which can be very satisfying,” she says.

Neuroscientist Rachel Herz, PhD, who wrote Why You Eat What You Eat agrees. “In that sense, people like them for a similar reason that they like home design shows: You see something come together over the course of an hour or half-hour.” Think of it as second-hand feelings of accomplishment—without having to clean up after.

Because food shows all follow this formula, it makes them predictable, too. Like Hallmark rom-coms, you know there’s going to be a happy ending in the form of a delicious food dish on the table, ready to be marveled over. “In this sense, they aren’t very threatening or stressful to watch, which can be comforting to many people,” Dr. Mann says.

Dr. Herz also points out that of course there’s a quasi-educational element to cooking shows, although she says that the majority of people who watch culinary shows likely don’t, in fact, make the dishes they see on-screen. “But whether they end up making it or not, there’s still that element of learning something new, like a cooking method or way to use an ingredient,” she says.

How cooking shows could affect your subconscious

Whether you like to have them on in the background or actively like watching them, it’s possible that culinary shows could change how you interact with food IRL. “There is some evidence that suggests that people who watch food shows snack more while watching,” Dr. Herz says. “While they might not be able to eat the food they see on screen, it seems that they still want to snack on ‘something,’ so it could lead to a subconscious desire for consumption,” she says.

Dr. Herz says watching cooking or food shows could also make you hungry. “Seeing videos or pictures of food can get someone primed for eating,” she says. “You might not have been hungry before sitting down on the couch, but ten minutes into watching a food show, suddenly you are.”

She also points out that different personality types will likely be drawn to different types of food shows. Again, it hasn’t been scientifically studied, but Dr. Herz says someone with a competitive streak may be more drawn to a show like Top Chef than someone who isn’t.

Right now, The Great British Baking Show is the beloved centerpiece in the buffet of culinary shows, but it’s surely not bound to be that last great culinary hit. Whatever the next one is, you can bet on it being easy to digest and familiar, following a recipe that’s been used before. And that’s exactly what makes it so comforting.

Here’s how food trends themselves are made and go viral.  Speaking of which, you’ve seen Well+Good’s predictions for 2020, right?