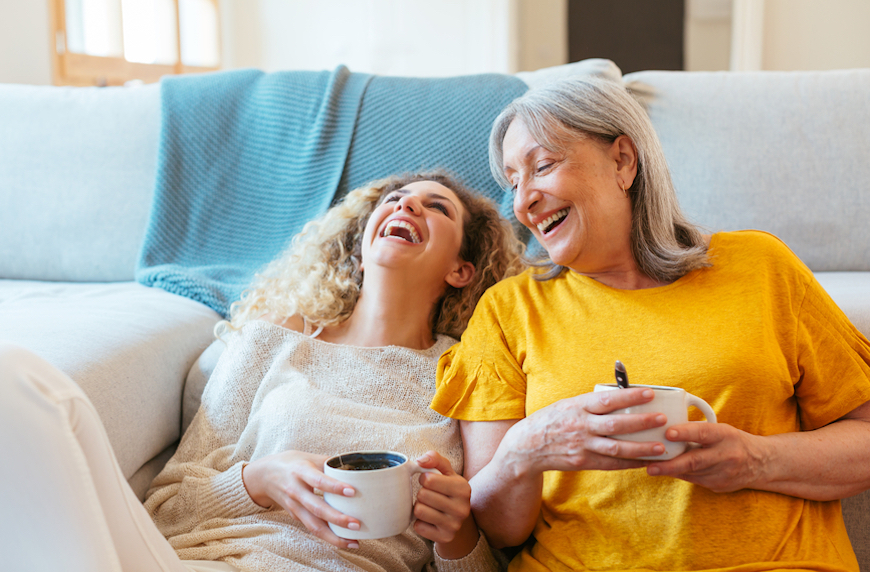 There might be a few things you already blame your mom for: your secret love of rom-coms, perhaps, or your undying drive for success thanks to years of helicopter parenting. But another “got it from my momma” (or dad, perhaps) trait that you might not have known about? Your digestive and gut health.

That’s right. There are some types of digestive and stomach problems that are hereditary, meaning that you have them because either your parents have them or because they have genes that got passed along to you that gave you those issues. But it’s not so simple as having a “weak stomach” because Mom has one too. In case high school bio wasn’t a clear indication, genetics are complicated—particularly when it comes to your digestion. So we asked gastroenterologists to help us break it all down.

Are stomach problems and other GI issues hereditary?

Your genes—groups of DNA that you inherited from either parent—play a role in the conditions and functions of your body, including the digestive system. “Some inherited traits may skip a generation or may leave a person more predisposed to developing a condition if their family members have historically been diagnosed before them,” says Niket Sonpal, MD, a NYC gastroenterologist and adjunct professor at Touro College. “In some cases, knowing your family health history can help inform what to do to take care of your health in a preventative way,” he says—such as having a history of diabetes in your family.

Other times, family history will guide you as to what to look out for in order to catch things early. “Examples of this could be cancers, cystic fibrosis, and other conditions that may have multiple factors, which include genetics. In these cases, knowing your family history allows you to know what to regularly scan for with your doctor,” Dr. Sonpal says.

Specifically with stomach and gut issues, there are a few types of conditions that can be impacted directly by the genes you inherit from your parents. “When it comes to digestive disorders, a few examples include familial adenomatous polyposis syndrome (or FAP) or hereditary hemochromatosis,” says Will Bulsiewicz, MD, a board-certified gastroenterologist and author of the upcoming book Fiber Fueled). Both of these conditions are caused by mutations to certain genes that a person would inherit from one parent or another and in some cases, the parent already has the condition itself.

Want more FAQ on gut health? Here’s what to know, straight from a top RD:

For example, hereditary hemochromatosis, a disorder that causes a person to absorb too much iron from their diet, is caused by a mutation in either the HFE, HJV, HAMP, TFR2, or SLC40A1 genes—all of which are linked to the production of proteins that regulate and transport iron throughout the body. Per the NIH, a person gets the condition when either both parents pass on a copy of a mutated gene, or one parent has the disease and passes on a dominate mutated gene.

Other inherited issues can be more manageable, like lactose intolerance. “Lactose intolerance happens when both copies of the LCT gene in a child mutate. This gene, which is the code that tells your body how to produce the enzyme lactase, mutates, and then the child can’t tolerate lactose,” says Dr. Sonpal.

There are also conditions that require the gene, but not everyone with the gene gets the disease. “A classic example of this is celiac disease. You need to have the gene to develop celiac. Yet 97 percent of the people who carry the gene will never actually manifest the condition,” says Dr. Bulsiewicz. That’s because celiac disease is considered a “multifactorial disorder,” per the NIH, which means that it requires the genes plus various specific environmental factors in order to occur.

Finally, there may be a genetic predisposition that exists, which can then cause an impact. “For example, 15 percent of people with Crohn’s disease have a sibling or parent who also has Crohn’s disease. But there’s no one gene that explains the entire disease state,” says Dr. Bulsiewicz.

However, family history is only a small part of your individual gut health. Two very close relatives can have wildly different gut microbiomes, which thus impacts their health in very different ways, regardless of their DNA. And that unique difference comes down to a variety of other factors.

Diet is one. “It comes as little surprise that the several pounds of food that we eat daily would impact our digestive health,” says Dr. Bulsiewicz. For instance, dietary fiber or a plant-based diet can protect against acid reflux, irritable bowel syndrome, and inflammatory bowel disease, he says. On the flip side, heavy consumption of processed meats and red meat have been associated with the development of colon cancer, inflammatory bowel, and diverticulitis.

“We believe that about 20 percent of our disease risk comes from genetics. This means that a full 80 percent is driven by our environment, [including] our diet and lifestyle.” —Will Bulsiewicz, MD

Plus, sleep and exercise are both important for proper digestive function, as well as limiting booze and tobacco, Dr. Bulsiewicz adds. Same goes with medications, like antibiotics, nonsteroidal anti-inflammatory drugs, and proton pump inhibitors, which are frequently-prescribed drugs known to at times correct but at other times promote digestive issues, he says.

Viral infections that are short-lived can also throw the gut out of balance and cause lingering issues. “It’s well described that people can develop an infection, such as a gastroenteritis, but then the symptoms can persist for weeks or months afterwards. The infection is long gone, but the digestive distress lives on. We call this post-infectious irritable bowel syndrome,” Dr. Bulsiewicz says.

“The key takeaway is that we believe that broadly speaking about 20 percent of our disease risk comes from genetics. This means that a full 80 percent is driven by our environment, [including] our diet and lifestyle,” says Dr. Bulsiewicz. That’s why he says it’s so important to do things like eat more plants, prioritize sleep and hydration, get good exercise, and other seemingly-simple lifestyle tweaks that can hugely impact gut health.

That said, if you have a family history of certain disorders, Dr. Sonpal says to get regular checkups and screenings to stay on top of that genetic component, too. It’s all important for your health.

These are the six golden rules of gut health, straight from gastroenterologists. And these are some surprising signs of poor gut health you might be overlooking.