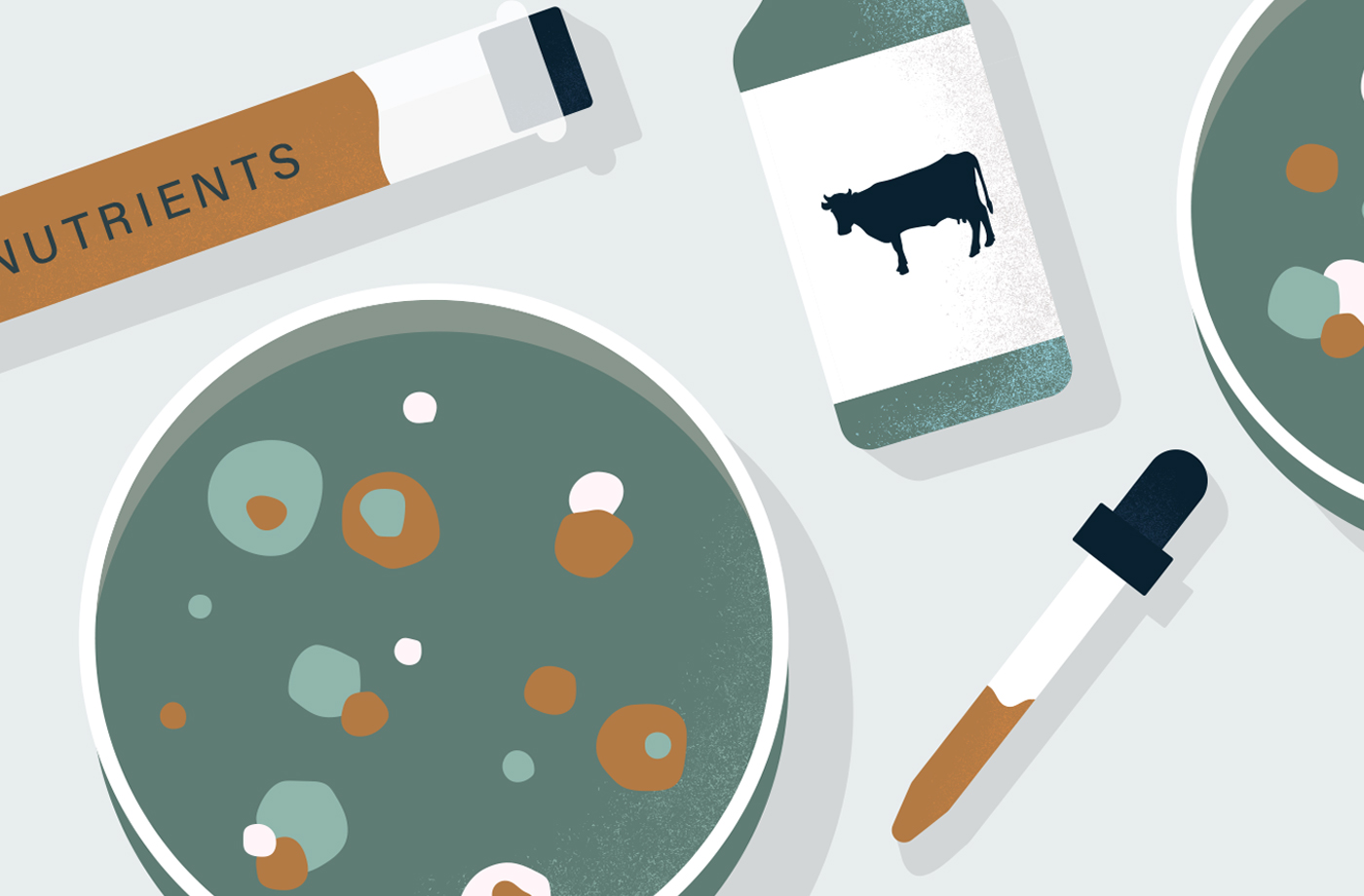 Even though vegan meat tastes more like “the real thing” than ever before, there’s still a great divide between meat eaters and non-meat eaters, and if we’re being realistic, there will likely always be one. The truth is, a lot of Americans really love meat. In fact, according to the U.S. Department of Agriculture, meat-eating reached a record high in 2018 (the latest year stats are available): Americans had access to an estimated 222.4 pounds of meat and poultry per capita.

Whether you eat meat or not, virtually everyone can agree that factory farmed meat is the least sustainable route to go; the environmental impact has been calculated to be particularly high. Many believe the solution lies in eating less meat, whether consuming one of the many plant-based substitutes or blended meat options. But others say that it’s unrealistic to expect everyone to give up meat forever, especially when meat offers up benefits like protein, iron, and B vitamins. This tension is giving rise to another possible solution: cultured meat, also often referred to as cultivated meat or lab-grown meat.

Never heard of it? Cultured meat is made from the stem cells of animals, which are collected and then taken to a lab where they are fed nutrients in order to grow into living tissues. The end result, in theory, is ready-to-eat meat, without having to grow, feed, and kill an entire animal. It’s a “best of both worlds” type solution, and one that some sustainability experts are really excited about. The topic was even a huge buzzword at Well+Good’s 2020 Trends launch event.

Here’s the catch: You can’t buy cultured meat yet. No company’s product or processes have been approved by the Food and Drug Administration yet, so we’re still a ways off from biting into a lab-grown beef burger. But food tech companies in this space say approval is getting close.

What is cultured meat exactly?

Speaking with representatives from Eat Just, Memphis Meats, and Artemys Foods, three cultured meat companies, the process for which they collect and replicate the animal cells to “grow” meat is similar. Andrew Noyes, the head of communications at Eat Just, which is cultivating chicken, says they take a biopsy of living chickens to collect the cells. Similarly, Artemys Foods co-founder Joshua March (whose co-founder, biochemist Jess Krieger, started experimenting with cultured meat a decade ago) says they collect stem cells from living cows to cultivate beef in a lab. And Eric Schulze, the vice president of product and regulation at Memphis Meats, says they collect their cells from beef and ducks that have recently been slaughtered for food. In each case, no animals are dying specifically for the purpose of cultivating meat in the lab.

Once in the lab, the cells are fed a solution of nutrients. “The nutrients that we feed the cells are the same type of nutrients that would exist in the body of an animal,” Noyes (of Eat Just) says. While none of the companies will reveal the exact blend—at risk of others copying what they’re doing—most players in the space use a cell culture medium that contains fats, proteins, salt, and growth factors that tell the cells how to grow. This is one of the most expensive parts of the process; mastering an affordable yet clean formula is one of the key hurdles that these companies face to be able to make their products scalable.

All said in done, the process from collecting cells to “growing” the meat takes about four to six weeks.

This might seem super strange. But March (of Artemys Foods) says that while culturing meat in a lab is new, it isn’t all that different to how many other types of food is made. “Most food starts in a lab and when you go into manufacturing, the process [of cultivating meat] isn’t dissimilar to making yogurt, beer, or other fermented products,” he says. But instead of making yogurt, you’re creating live mammal tissues in a lab, which is a bit more complex.

As mentioned above, none of these products are on the market yet, so we don’t yet know how the protein and other nutrients in a cultured product would compare to its livestock counterparts. “[The nutrition] definitely it would be similar, but you have to think about the nutrients a chicken ingests from [eating grass] from a field,” Noyes says of Eat Just’s product. He says that what living animals eat (whether conventional or grass-fed) plays at least a small role in how nutrient-rich they are—and thus the nutrient solution that’s given to these cells is a crucial part of the final product.

This aspect excites Schulze (of Memphis Meats): Through the nutrient solution, you can control the nutrition and even the taste profile of what the end result will be. “A cow that eats grass and forages has a different flavor than a cow given corn-based feed,” he says. “[Similarly], the amino acids and vitamins you give cells in lab can change the flavor, too.”

Speaking of sustainable protein options, here’s the verdict on the Impossible Burger versus the Beyond Burger:

For healthy eaters who make careful ingredients list-reading a regular habit, not knowing exactly what’s being fed to the cells to “grow” them can be a bit unnerving. While the exact feed is currently being kept under wraps from the general public, cultured meat companies must reveal it—along with extensive knowledge about the whole process—to the FDA and USDA, who will give the final verdict on if and when cultured meat is safe for people to eat. Cultured meat is rare in the sense that it involves live animals (which falls under the USDA’s jurisdiction) and processed food (which the FDA inspects), so it must meet standards from both.

“The USDA Food Safety and Inspection Service (FSIS) and the FDA are working together to pave the way for regulation of food produced using animal cell-cultured food technology,” a FSIS spokesperson says via email. The spokesperson says that it’s the USDA’s job to approve the process for cell collection, selection, and growth. Any part of the process that doesn’t involve an animal (like the nutrient feed) must be approved by the FDA.

FDA spokesperson Nathan Arnold emphasizes that every step of the process and the ingredients in the nutrient blend will be thoroughly evaluated. “The FDA and USDA addresses that we will evaluate materials and processes related to these products, and we expect this consultation process to look at a wide variety of factors, including the chemicals and nutrients used in production,” he says, pointing to a specific agreement that has been made regarding the approval process. The FSIS spokesperson also adds that it’s not a one-and-done approval process. Even after the products are on the market—if and when that happens—the food tech companies will have regular inspections, just like all other food suppliers and companies.

As far as how close the products are to actually being approved, the FSIS spokesperson doesn’t offer any specifics on a date. “As both agencies learn more and develop their coordinated regulatory oversight program for these products, they will share information with the regulated industry and the public.”

Talking to the cultured meat companies, it’s clear that the FDA and USDA—while being critical—aren’t shying away from food technology in this way. Schulze, who used to work on the other side of the process as an FDA federal regulator, says, “We’re working together in a way that should be a model for other government agencies. They treat us as a partner. They’re embracing innovation while still making sure the U.S. produces safe food.”

What cultured meat could mean for sustainability

While the FDA and USDA are combing over the safety of cultured meat, the Good Food Institute—a non-profit that works with scientists, investors, and entrepreneurs in the meat-alternative space—is doing an extensive study on how cultured meat compares to conventional meat when it comes to sustainability. While the report is not yet complete, GFI director of science and technology David Welch, Ph.D, is hopeful about what they have learned so far.

To conduct the study, cultured meat companies are being transparent with the GFI about the whole process—yes, including the nutrient blends—so the scientists the GFI is working with can determine just exactly how each part of the process is affecting the planet. “In the case of chicken, we’ve learned that cultured chicken will result in between 35 to 67 percent less land use compared to conventional chicken,” Dr. Welch says.

Besides land use, he says cultured meat doesn’t have the same issue of pollution run-off that animal agriculture has, such as animal waste flowing into rivers, streams, and oceans. “With chicken, there is 70 percent less pollution from conventional animal agriculture,” he says. The impact is even more profound with beef. “With cultivated beef, you’re looking at more than a 95 percent reduction in land required versus conventional beef, about 95 percent reduction in nutrient pollution runoff, and an 80 percent reduction in climate change emissions.” So even though energy and water use are still big parts of the cultured meat process, the sustainability gains are great.

Dr. Welch also adds that the cultured meat sustainability report the GFI will release is really just a starting point; it’s important for companies to know the baseline so they can continue to find ways to be as environmentally-friendly as possible. “What excites me about the industry is that it can keep improving,” he says.

There’s a lot we still don’t know about cultured meat: how it will taste, how healthy it is, when it’s even going to be available to eat. But clearly, experts think it has a lot of potential for the future.

Now that you know the deal with lab-grown meat, here’s what you need to know about lab-grown coffee. And here are some tips on how to be more sustainability, regardless of whether you eat meat or not.