For some parents, raising the next generation of healthy eaters is about more than eating vegetables—it’s about ending diet culture 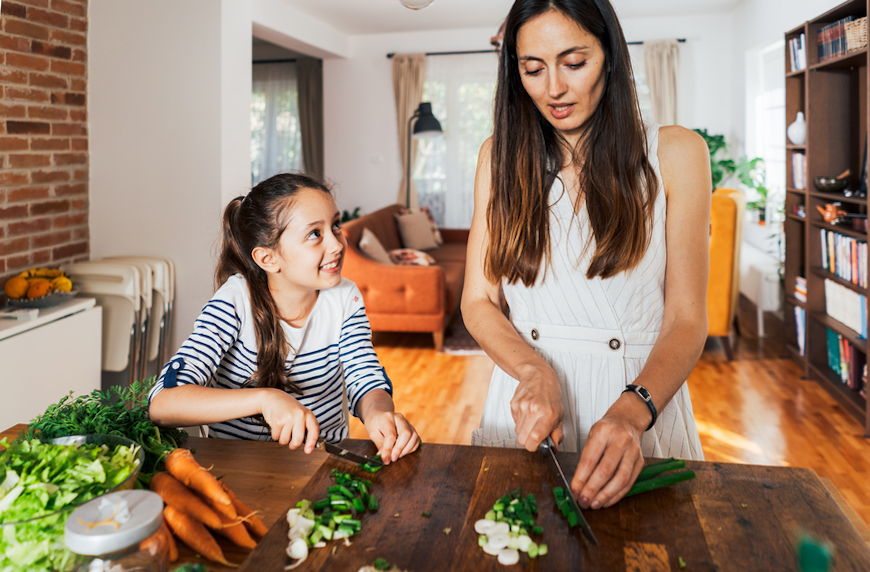 Keto, intermittent fasting, ketotarian: It’s hard to escape talk about dieting in America these days. Diet culture—a system of beliefs that glorifies thinness and weight loss, and equates those things with health, beauty, and virtue—is so pervasive that it’s even reached our children through Paleo baby food and a controversial Weight Watchers app for kids. But with girls as young as 3 saying they need to go on a diet, something in America has gone undeniably awry.

“We as a society teach them that,” says Alexandra Caspero, RD, a dietitian and plant-based chef. “Kids are so impressionable when comes to figuring out their own relationship with food.” Translation: The examples that we as adults set goes a long way towards teaching kids about what it means to eat healthy.

As a new generation of parents have become aware of the harms of diet culture and all the food demonizing that comes with it, many are approaching nutrition differently. For many, that means abandoning the “eat this not that” mentality of their own parents and radically transforming how they talk to their kids about food.

All parents want their kids to be healthy. But social media, commercials, and TV make that hard with incessant messaging that champions weight loss and demonizes certain foods while praising others—messaging that doesn’t lend itself to a healthy relationship with food. Dalina Soto, RD, a mother of two young kids and dietitian who specializes in intuitive eating, says her family’s favorite children’s TV show recently featured two dads talking about how they lost weight on a low-carb diet. “I cringed,” she says.

Lindsay Young, CSCS, a mom of three kids and a holistic nutritionist, recalls her daughter grabbing a celebrity tabloid magazine off of the table as a toddler. “I had this moment of realization that I did not want her seeing those images,” she says.

Even school can be tricky. “I’ve heard preschool teachers saying that kids will look at another kid’s lunch bag and see chips, and tell them your mom’s giving you poison,” says Jennifer Anderson, RD, founder of the Instagram page Kids Eat in Color, which make a person feel ashamed. In an effort to fight the growing (and serious) problem of childhood obesity, she adds, many school programs teach black-and-white nutrition messaging, like all veggies are “healthy” and all candy is “not healthy.” This kind of language can reinforce the idea that some foods are good, some are bad, and therefore you are good or bad based on what you eat. “You’re setting kids up to fall into diet culture. I think we need to have much a more nuanced perspective to teach kids from the earliest point,” says Anderson.

“When you’re focused on calories or carbs, kids pick up on that, and it can be detrimental as they develop their own relationship with eating and their bodies.” —Alexandra Caspero, RD

But children’s main and most influential exposure to diet culture begins at home. No one is immune to diet culture—even new moms are encouraged to shed their “baby weight” and “bounce back.” But moms, who typically bear the brunt of childrearing responsibilities, are between a rock and a hard spot, since kids soak up any and all diet and weight talk. Caspero remembers her own mom posting calorie counts on the fridge after every meal, making diets seem like the norm. “Sometimes kids get the message that everyone is on diet,” she says. “When you’re focused on calories or carbs, kids pick up on that, and it can be detrimental as they develop their own relationship with eating and their bodies.”

Crystal Karges, RD, IBCLC, mom of five and a child feeding specialist at Crystal Karges Nutrition, struggled with an eating disorder in her late teens and early 20s and says that diet culture played a role in affecting her body image and eating habits. “Growing up, dieting was normalized, glamorized, and promoted as a way to stay ‘healthy.’ Foods were always labeled as ‘good’ versus ‘bad,’ which made eating confusing and chaotic,” she says.

“As a child, I remember the adults around me constantly criticizing their bodies and talking about ‘bad’ foods,” adds Haley Neidich, LCSW, a fat-positive activist and mom of one. She decided to become a licensed mental health professional following her own eating disorder recovery.

Those early impressions stick: A 2016 study of 181 mother-daughter pairs found that girls whose moms were on diets were more likely to start dieting themselves before age 11, and that dieting was associated with overeating, weight gain, and chronic health issues. “I hear a lot with clients that ‘my mom was always on a diet when I was 10 or 12.’ That’s when a child’s body starts changing, and that can be scary,” says Soto.

Your 101 primer on intuitive eating, which many experts think is the antidote to diet culture:

For adults at least, the tides are starting to shift on diet culture. Our definition of healthy eating has largely evolved beyond calorie-counting to a more qualitative approach; and the benefits of intuitive eating are becoming a topic of mainstream conversation. And there have been some strides in changing how we teach kids about food, too.

In 2016, the American Academy of Pediatrics published a report about preventing obesity and eating disorders, which recommends that parents avoid discussing or implementing weight loss with their children. Instead, the organization emphasizes shifting the focus to living a healthy lifestyle. “We sometimes forget what it’s like to be 10 and emotionally understand the changes happening. One small comment can really derail things,” says Caspero.

That’s why many health experts and parents are not forcing kids to eat veggies or otherwise “teaching” healthy habits. They’re modeling healthy eating themselves and offering wholesome foods without setting strict rules. The goal is to raise kids who understand hunger and fullness cues, eat until they’re full, and aren’t fixated on food or their bodies. “That’s what intuitive eating is. Getting back to that trust,” says Caspero.

This philosophy has been very helpful to Anderson, who discovered intuitive eating 10 years ago after struggling with her weight in college. When her older son had trouble staying on the growth charts three years ago, she launched her Instagram page to take the stress out of mealtime and help parents feed their kids better without shame or stigma. It resonated. “Moms started sharing the page, and the next thing you know it’s taken on a life of its own,” says Anderson.

First and foremost, parents aren’t equating food with morality, since study after study shows that qualifying a food as “good” or “bad” makes forbidden foods more tempting (and thus creates an obsessive relationship). If dessert’s only for special occasions, for example, kids overdo it when it is served because they don’t know when they’ll get it again. “It creates a shameful relationship with food,” says Soto, potentially leading to eating disorders.

“Kids learn that what their bodies tell them is good. It takes the pressure off and allows kids to explore with confidence.” —Jennifer Anderson, RD

Instead, nutrition experts say that it’s the parent’s responsibility to serve healthy foods at set times of the day, and the child’s responsibility to decide how much to eat. In practice, that means serving at least one food a kid doesn’t know or like alongside at least one food he does enjoy—and never forcing him to eat anything. As kids are frequently exposed to new and scary foods, they eventually broaden their tastes. “It allows a child to tune into their body, which is the first step to combatting diet culture,” says Anderson. “Kids learn that what their bodies tell them is good. It takes the pressure off and allows kids to explore with confidence.”

Similarly, Neidich never labels foods as unhealthy, and even gives her 2-year-old daughter access to her own shelf in the fridge. “We really trust her to make her own food choices. In our fat-phobic, overly health-obsessed world, it takes a great deal of persistence to constantly challenge your own beliefs and stay focused on the goal of raising a child who is free from diet culture,” she says.

Parents are also encouraged to regularly offer kid-sized desserts with dinner to make sweets neutral and guilt-free. And they never make dessert conditional on eating other foods, in order to reinforce hunger and fullness cues. “Kids are surrounded by foods that may not be nourishing, and they need to be able to listen to whether they’re full and not be completely obsessed with sweets,” says Anderson.

Many parents also believe it’s important for kids to understand why they eat what they eat, so they teach kid-friendly primers on nutrition. When kids are 2 or 3, Anderson associates the color of a food with what it does in your body (e.g., red tomatoes contain lycopene, which is good for your heart). At ages 4 and 5, she explains that some foods do a lot and some do a little, with her explanations getting more detailed as kids get older. “I had a good conversation when my son was 6 about how sugar does one thing in body: energy. Compare that to broccoli, which does 100 things. What did he come away thinking? That broccoli is powerful, and candy isn’t bad but we don’t eat as much because it doesn’t do as much,” says Anderson. “Nuance gives kids a really strong understanding of why we want to eat nourishing food.”

Finally, parents never tell their kids to diet or talk about their own diets or weight in front of their children. Lindsay Ronga, a yoga instructor, eating recovery coach and mom of three young girls, tells her kids that people come in all shapes and sizes. “The word ‘fat’ is not a bad word in our house. I share with my daughters that their bodies will absolutely change and they should expect it. Their value comes from who they are. Not what they look like,” she says. “Eating shouldn’t be about your body looking a certain way,” agrees Soto.

Thankfully, you don’t need to be a nutritionist to teach healthy eating. “You don’t have to learn feeding theories. Take a relaxed approach, understand your responsibilities and your child’s, and [healthy eating] will naturally happen on its own,” says Caspero.

Here’s how to start listening to your body, according to experts. And here’s how eating disorder survivors navigate the tricky territory of trendy, restrictive diets.