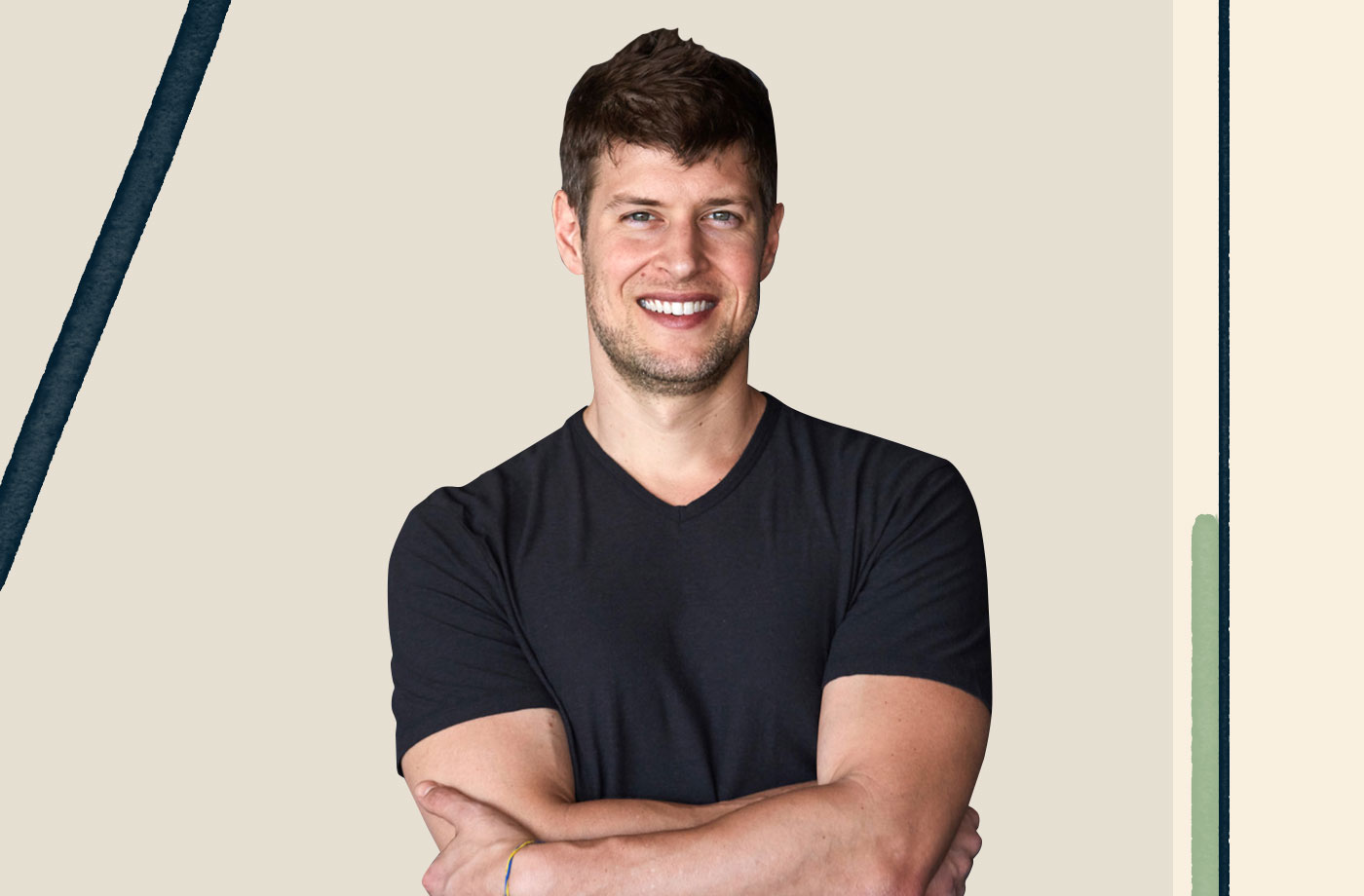 Brain health expert and science journalist Max Lugavere is the kind of guy you feel comfortable taking diet and lifestyle tips from given his good looks, easy confidence, and the fact that his entire life’s mission was lovingly inspired by his mother. After she was diagnosed with dementia, Lugavere set out to understand why she’d developed the disease and how it could have been prevented. That work birthed his first book, Genius Foods: Become Smarter, Happier, and More Productive While Protecting Your Brain for Life, which took a long, hard look at the dietary factors which influence brain health.

In his newest volume (published on Tuesday), The Genius Life: Heal Your Mind, Strengthen Your Body, and Become Extraordinary, Lugavere expands his findings beyond nutrition and the brain to explore a variety of lifestyle choices that can optimize your overall health. In chapters playfully titled, “Don’t Fork Around” and “Get Off Yo’ Ass,” Lugavere distills his dense research into easy-to-digest, affable advice for extending your healthspan, or the amount of life lived well.

The book covers a wide berth of topics, so I called Lugavere to discuss some of its most pressing themes (and get some of my own selfish questions answered); here, our conversation on the diet wars, detoxing your home without becoming totally neurotic, and whether or not you should skip spin in favor of scrubbing your home.

Well+Good: How have your views on food changed since you started researching this book?

Max Lugavere: The dietary recommendations I make in this book are not as focused on macros like carbs and fat. When looking at dietary diversity among the world’s remaining hunter-gatherers, and even among the world’s Blue Zones, it’s pretty clear that people can not just survive, but thrive on diets with varying compositions of carbs and fat.

Most people are going to get the biggest nutritional bang for their buck by simply knowing how to identify and avoid ultra-processed foods [products made from substances extracted from foods such as hydrogenated fat and starches and which often also contain additives], which are inherently fattening because they don’t induce satiety, they’re often dehydrated to become shelf-stable, and they are able to be rapidly consumed and digested…

The other point that I make in in the nutritional recommendations in The Genius Life that wasn’t made in Genius Foods is the importance of protein. This is something that the fitness community has known about for some time, but there’s still a lot of confusion in the general population about the value of dietary protein. Some people believe we eat too much and that it’s not good for you but actually, protein is very good for you. It’s very important as a dietary tool because it’s the most satiating macronutrient.

You mention in the book that your mom—whose battle with dementia spurred your interest in brain health, and who passed away from cancer in 2018—didn’t eat much meat. Has that shaped your views on protein?

I can’t say that my mom’s diet, which was largely devoid of animal products, was to blame for her illnesses, but it certainly didn’t protect her. So, I’m a big advocate for the consumption of properly and humanely-raised animal products. I think that in terms of nutritional value, they’re just unbeatable… There’s a lot of good evidence that the nutrients in meat are incredibly valuable. And this goes beyond protein—it’s also about creatine, it’s about vitamin B12, it’s about minerals that are freely accessible to the body when they’re found in animal products.

Advocating for meat consumption is sort of controversial in 2020.

But at the same time, I’m a big advocate of plants. So ironically, my message is among the most balanced today.

I’m kind of exhausted by the diet wars online. The discourse can be constructive but ultimately, the best diet is going to be the one that you adhere to. I think that’s one focused primarily on whole foods, because whole foods are so satiating (and ultra-processed foods drive their own over-consumption to the tune of 500 additional calories).

What are some food myths you really want people to stop believing?

That veganism is an optimal diet… I think veganism can work for certain people, but it’s by and large not an optimal diet [for everyone]. It’s not supported by evidence of being an optimal diet, either. People can embrace veganism for any reason. My mom was an animal rights advocate and she was largely vegetarian so it’s nothing personal, but  I take issue with the health argument for veganism.

Another myth going around is that the carnivore diet is an optimal diet for people. It’s pretty clear that fresh produce is not harmful, generally speaking. Fruits and vegetables obviously impart many health benefits, from increasing our fiber consumption to healing our gut bacteria to providing compounds like flavonoids, which are very protective our our eye and brain tissue. So again, while I’m a big advocate for meat, I’m also a big advocate for plants.

Another thing I see spread like wildfire on the internet is this idea that we need to rely on detox teas and supplements to effectively detoxify. I think we do need to encourage our body’s detoxification because we’re inundated with exposures to environmental toxins, but buying overpriced detox teas isn’t the way to do it.

Beyond food, in The Genius Life you have a chapter about detoxifying the home for better health. If I was going to do one thing to make my home safer, what would it be? Where should I start?

Definitely eliminate plastic in your kitchen as much as you can. Don’t store your food in plastic and don’t buy food or beverages in plastic, especially if they are shelf stable. If it’s a refrigerated product that’s in plastic, it’s less of a concern, but if it’s shelf-stable food products in plastic, you don’t know where that plastic sat (exposed to heat) before it ended up in the supermarket. The same goes for beverages— bottled water could have been sitting in a truck’s cargo bed for days, weeks, months, and what happens is that it leaches plastic compounds like BPA and phthalates which can act like estrogen in the body. This [can affect] everything from libido to potential risk for certain cancers to even insulin functions, because having too little or too much estrogen affects our insulin sensitivity.

You also talk about how cleaning your house is underrated as a form of exercise. My house is a mess and I’m spending $30 for spin classes. Should I be ditching them in favor of domestic duties?

Great question. Cleaning and chasing your cat around the living room and doing the laundry and things like that all fall into the category of non-exercise physical activity. These activities can add up to anywhere between 300 to 1000 calories burned every day, which is a lot more calories than anybody would care to burn on a treadmill. I wouldn’t say that you should cancel your gym membership because when you’re going to the gym you’re doing a more deliberate form of exercise, whether its HIIT or resistance training, and you’re working out different energy systems in your body that are beneficial. You’re increasing the number of mitochondria in your cells, you’re killing off old and dysfunctional mitochondria, you’re boosting BDNF in the brain, which is a protein that helps support neuroplasticity, etc. Deliberate exercise is definitely super important, but exercising as a means to burn calories is where we’ve been led somewhat astray.

A more important goal is to just be more active throughout the day, whether that means doing laundry or cleaning the house. These non-exercise physical activities can add up to you know, 10 times more calories than we burn sitting in front of the TV. So it’s an important part of maintaining a healthy metabolism and a healthy body composition.

One last question—can you help me figure out, at long last, which oil i’m supposed to be cooking with? I’m so confused.

This interview has been edited and condensed for clarity.

According to Lugavere, intermittent fasting can boost your brainpower. Plus, this is why he says not to worry about the pink dye in farmed salmon.