Jessica Mulroney’s decision to privately threaten Black influencer Sasha Exeter’s livelihood and try to silence her had major consequences on Mulroney’s career after Exeter went public and recounted Mulroney’s treatment of her. CTV is no longer airing her reality program I Do Redo, and Good Morning America will no longer use Mulroney as a fashion contributor. Did it cost Mulroney her friendship with Meghan Markle? The Duchess of Sussex has made no comment about it publicly, nor is she likely to.

Page Six spoke to a source though who claims that Mulroney and Meghan’s friendship was strained long before Mulroney’s scandal. Meghan’s rep declined to comment on Page Six’s story, so make of that what you will.

Multiple sources told Page Six that the Duchess felt Mulroney was “benefiting” career-wise from her position as Meghan’s close friend and stylist at one point. (The Duchess styles herself now and has been for over a year.) Mulroney gained much more name recognition after Meghan joined the royal family—enough for her to get coverage from U.S. outlets because of their friendship and even a profile in Harper’s Bazaar in honor of her GMA position.

A source told Page Six that “I don’t know what the tipping point was, but Jess has been on the outs for some time. Their friendship is definitely not what it was. And really, how can you have such a close friendship when one person is basically making a career out of the friendship?”

Mulroney hasn’t spoken at all about Meghan. In her profile with Harper’s Bazaar, Mulroney said, “This is my first interview that I’ve done since the wedding or anything. Listen, every person has to have a bit of privacy in their life. There are certain things I hold very dear and secret. There are things I’ll never talk about for sure. My life is an open book, but there’s always a few secret pages in the back that nobody will be able to read.”

But when she commented on Exeter’s Instagram video where Exeter discussed how Mulroney threatened her, she alluded to Meghan, her “closest friend where race was front and centre.”

“@sashaexeterr, you are right when you say ‘this shit needs to stop,'” Mulroney wrote. “As leaders, we need to join hands and call out wrongs. I know we have different experiences. And that is something that, even in the course of a heated argument, I need to acknowledge and understand. I am unequivocally sorry for not doing that with you, and for any hurt I caused. As I told you privately, I have lived a very public and personal experience with my closest friend where race was front and centre. It was deeply educational. I learned a lot from that. I promise to continue to learn and listen on how I can use my privilege to elevate and support black voices.”

Privately, Exeter revealed that Mulroney threatened her with a libel suit after posting the comment. “Here is what happens when you call out somebody with privilege and with wealth, okay?” Exeter said. “They publicly make an apology or a statement and privately behind closed doors, they send you a threat of filing a lawsuit against you. I’m not quite sure what’s going on because I thought I was very clear yesterday in my video that I’m not going to be silenced and I’m not going to shut up. I’m going to move forward and do what I need to do essentially to protect myself at this point. But I’m feeling confident in doing so, knowing that I have the truth, the unequivocal truth.”

Mulroney posted a statement on her Twitter shortly after CTV announced its decision to no longer air I Do Redo. She wrote:

The events that have transpired over the last few days have made it clear that I have work to do. I realize more than ever how being a white, privileged woman has put me far ahead of so many, and in particular those in the Black community.

I respect the decision of CTV and have decided to step away from professional engagements at this time. I’m going to take this time to reflect, learn, and focus on my family.

I also want to take a moment and clarify that I have no intentions of pursuing any legal action. I was wrong and for that, I am truly sorry. I remain more committed than ever to support anti-racism efforts and will do everything in my power to right this wrong. 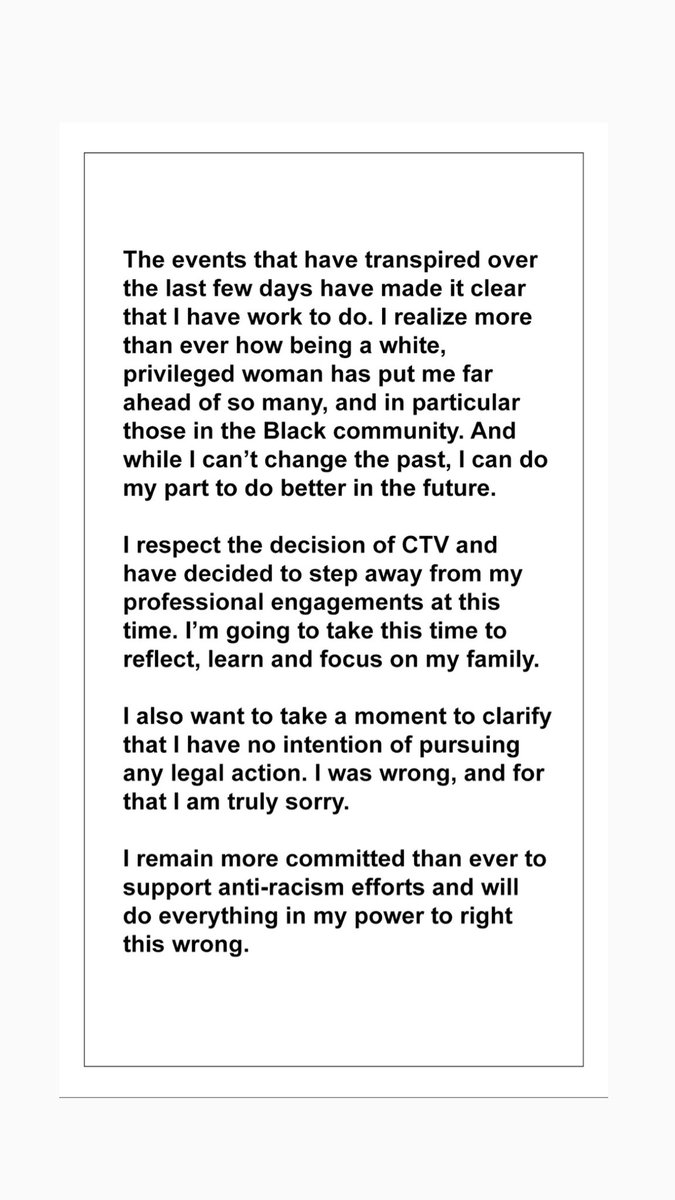 859 people are talking about this

Page Six isn’t the only outlet to report on how Meghan allegedly feels about Mulroney’s comments. Entertainment Tonight was told by a source close to Meghan that it was “painful” for her to learn that one of her close friends could have made such “misguided and insensitive comments.”

The outlet claimed that Meghan is “embarrassed” to be roped into Mulroney’s controversy, especially as the Duke and Duchess of Sussex are meeting with community leaders to learn more about the Black Lives Matter movement and support the cause.

“Meghan and Harry have always supported policies of diversity and inclusivity,” the source said. The source noted that learning about Mulroney’s remarks was “hurtful” for Meghan.

ALYSSA BAILEY NEWS AND STRATEGY EDITORAlyssa Bailey is the news and strategy editor at ELLE.com, where she oversees coverage of celebrities and royals (particularly Meghan Markle and Kate Middleton).
This content is created and maintained by a third party, and imported onto this page to help users provide their email addresses. You may be able to find more information about this and similar content at piano.io