Skip to content
Home » The Storied History of Juneteenth

Juneteenth, a holiday that honors the end of slavery in the United States, has been celebrated by Black Americans for the last 155 years. But this year, nationwide protests following the recent deaths of George Floyd, Breonna Taylor, Ahmaud Arbery, and other Black people at the hands of police have sparked an unprecedented interest in the day from non-Black people.

How to Actually Be a Better Ally

We Need a Black Lives Matter Activist in Congress

The American education system has largely white-washed history, crediting President Abraham Lincoln with freeing slaves by signing the Emancipation Proclamation in 1862 and ending the Civil War. But it would actually be two more years before slavery was officially ended, when Gen. Gordon Granger and a group of Union troops arrived in Galveston, TX to tell slaves of their freedom.

It’s one of many facts about the experience of the Black community that many white Americans are learning about and acknowledging, perhaps for the first time. “Juneteenth is now on people’s radar even though we have been using it to validate our existence which has been wiped away from us for generations,” James Felton Keith, who is running for a seat in New York’s 13th Congressional District, told ABC News. “Juneteenth truly represents freedom.”

Ahead, what to know about Juneteenth’s history, why people are fighting to make it a national holiday, and how you can help honor the day.

Juneteenth, a combination of “June” and “nineteenth,” commemorates June 19, 1865: the day that Union Army Gen. Gordon Granger traveled to Galveston (the last area in the U.S. where Black people were still enslaved) to order they be freed. This day was long overdue, especially considering that Lincoln had signed the Emancipation Proclamation, meant to free all enslaved people, in January 1863.

In the time in between the signing and Granger’s announcement, many white slave owners ignored Lincoln’s declaration. “In fact, there were slave owners who moved from parts of the South, from slave states, to continue the practice of slavery in Texas because they knew they could practice there for a longer time without interruption,” Kelly E. Navies, a museum specialist and oral historian with the National Museum of African American History and Culture, told ABC News.

Furthermore, Juneteenth.com states that there were not enough Union troops in Texas to enforce Lincoln’s proclamation. But with the arrival of Granger’s troops, there was enough strength to do so. “The people of Texas are informed that in accordance with a Proclamation from the Executive of the United States, all slaves are free,” the Union general read aloud to the residents of Galveston, per the Texas State Library and Archives Commission. Uncertainty about the future of Black people in the U.S. would persist, but it was the first step toward freedom for a group that had long been oppressed.

How is the holiday celebrated?

The holiday—which is also referred to as Emancipation Day, Black Independence Day, and Juneteenth Independence Day—is celebrated much like the Fourth of July. Events often take place with parades or festivals and involve, food, picnics, and other outdoor activities with loved ones. There is often a religious or spiritual element to the proceedings with prayers and guest speakers.

In 1866, the first Juneteenth anniversary celebration occurred in Texas, spreading to the surrounding states of Louisiana, Arkansas and Oklahoma first. By 1872, the celebrations expanded when a group of former slaves purchased “emancipation grounds” meant for Juneteenth parties. Ten acres of land in Houston became Emancipation Park, where Juneteenth events are held to this day. There’s also an Emancipation Park in Austin and a Booker T. Washington Park in Mexia, Texas.

Douglas Matthews, who has helped facilitate Juneteenth gatherings in Galveston, told The New York Times that while the city usually hosts around 15 events, this year, due to the coronavirus pandemic, several of the in-person celebrations will take place virtually. Large-scale celebrations will still take place, per ABC News. One such event is “Juneteenth 1,000,000 March NYC,” where protesters are expected to gather with masks and gloves in front of City Hall and paint a Black Lives Matter street mural on Friday.

How are companies acknowledging Juneteenth?

A growing number of brands and companies are acknowledging Juneteenth for the first time this year, granting employees paid holidays or supporting the Black community in other ways. Some of the major companies to make Juneteenth a paid company holiday included Nike, Twitter, and the NFL. In a press release, Target Chairman and CEO Brian Cornell said, “We recognize that the racial trauma the country is experiencing now is not new, but throughout recent weeks there has been a sense that this time is, and has to be, different.” The retailer will recognize Juneteenth as a companywide holiday in the future and hourly employees working on Friday will be paid time and a half.

Media organizations are also spotlighting Juneteenth. Hulu is moving the release dates for two of its originals—Love, Victor (June 17) and Taste the Nation (June 18)—in observance of the day. Vice TV will devote its programming on Friday to amplifying Black voices. CNBC has compiled a running list of companies observing Juneteenth.

Movement, Not a Moment – #YourAttentionPlease 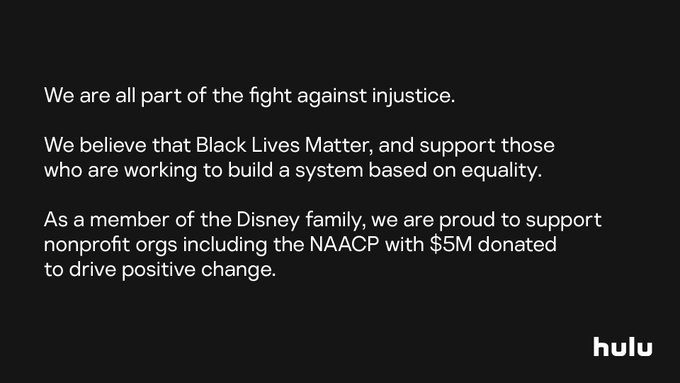 Movement, Not a Moment – #YourAttentionPlease 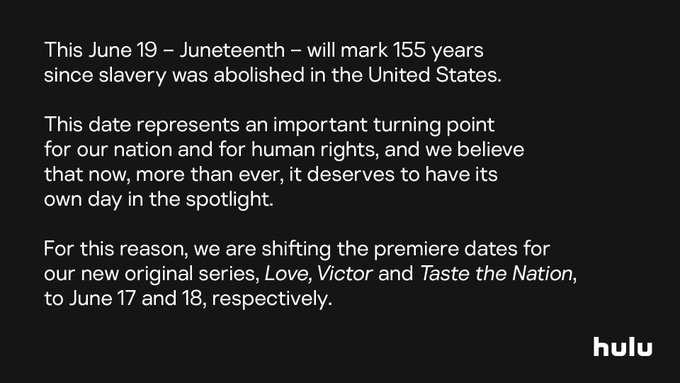 80 people are talking about this

What is the controversy with President Trump and Juneteenth?

Trump recently drew criticism for returning to the campaign trail with a rally in Tulsa, Oklahoma on June 19. Tulsa is the site of one of the nation’s most egregious accounts of racist violence. In 1921, white mobs attacked a black-owned business district, destroying more than 1,000 homes and killing 300 people, according to the Times. “This isn’t just a wink to white supremacists — he’s throwing them a welcome home party,” California Sen. Kamala Harris tweeted.

The Trump rally will occur on Juneteenth Day, when many Americans commemorate the end of slavery, in a city that was home to an infamous 1921 massacre of Black people, one of the worst racial atrocities in the nation’s history. https://www.latimes.com/politics/story/2020-06-10/trump-says-he-will-resume-campaign-rallies …

34.2K people are talking about this

“I did something good: I made Juneteenth very famous,” Trump said during an interview with Wall Street Journal published June 18. “It’s actually an important event, an important time. But nobody had ever heard of it.” Speaking with Fox News, Trump said that that his rally could be thought of as “a celebration” for coinciding with Juneteenth. By late Friday night, Trump tweeted that he would delay his campaign rally a day later, writing, “Many of my African-American friends and supporters have reached out to suggest that we consider changing the date out of respect for this Holiday, and in observance of this important occasion and all that it represents. I have therefore decided to move our rally to Saturday, June 20th, in order to honor their requests.”

Could Juneteenth be recognized as a national holiday?

While Juneteenth has received increased attention this year, many argue that it’s not enough. Several have called for Juneteenth to be recognized as a federal holiday, granting a paid day off for employees. In 1980, Texas became the first state to anoint Juneteenth a holiday. Currently, 47 states and the District of Columbia officially observe Juneteenth. Hawaii, North Dakota, and South Dakota are the only three remaining holdouts.

Texas Rep. Sheila Jackson Lee introduced a resolution to recognize the historical importance of Juneteenth every year. According to Time, the resolution has more than 200 co-sponsors this year. Next, she’ll introduce legislation to make Juneteenth a federal holiday. This week, both Gov. Ralph Northam of Virginia and Gov. Andrew Cuomo of New York joined the years-long fight, announcing they will propose legislation to make Juneteenth a paid holiday for state employees. On the eve of Juneteenth, House Speaker Nancy Pelosi ordered the removal of four portraits depicting House Speakers who served in the Confederacy from the Capitol. Sen. Bernie Sanders of Vermont called for the holiday to be recognized nationally in 2019.

Today I will sign an Executive Order recognizing #Juneteenth as a holiday for state employees.

I will advance legislation to make it an official state holiday next year.

Juneteenth should be a national holiday. 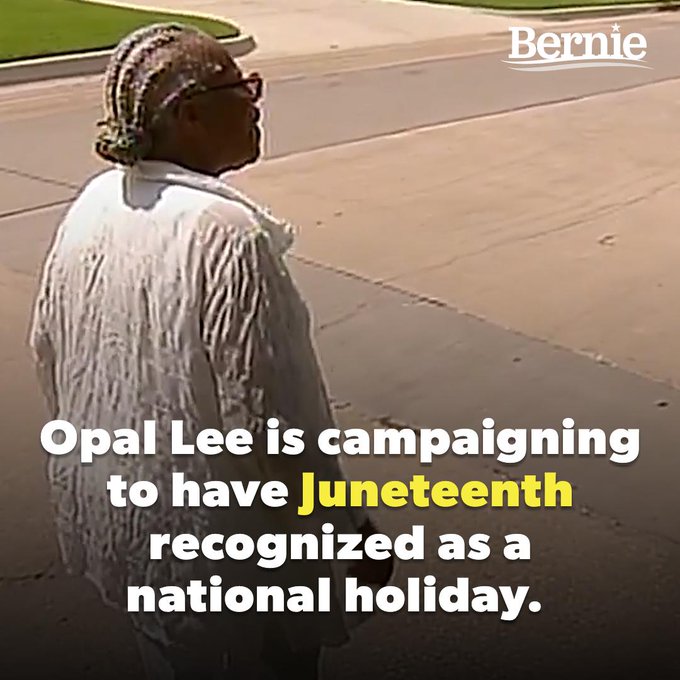 3,848 people are talking about this

I have the day off. What can I do to honor Juneteenth this year?

For those with a day off from work looking to spending the day supporting the Black community, there are several ways to take action, like attending one of the many events to commemorate the day scheduled across the nation. One such demonstration is “I, too, am America: Juneteenth Rally for Justice” in Tulsa, OK, where Trump postponed his campaign speech. Al Sharpton will be a keynote speaker and there will be a place to register to vote on the premises.

Just so we’re clear, white people, firing Aunt Jemima & giving us Juneteenth off are not the frontlines of defeating white supremacy & dismantling structural & instutional racism. Better schools, a just criminal justice system, access to healthcare was more what we were thinking.

1 way you can help is by supporting this Title 1 public school in Minneapolis near where George Floyd was murdered. It’s predominantly Black, East African, & Latinx. They have been hit hard by #Covid_19 & then the damage after the uprising. Donate &/or RT! https://www.gofundme.com/f/support-green-central-families …

Green Central is a title I public elementary school in the heart of South Minneapolis. W… Emily Anderson needs your support for Support Green Central Families

790 people are talking about this

If you’re still hesitant about heading to a IRL event because of the pandemic, sign the Change.org petition by 93 year old Opal Lee to make Juneteenth a national holiday. You can also donate to several nonprofits that benefit the Black community, including the The Bail Project, NAACP Legal Defense and Educational Fund, and Reclaim the Block.