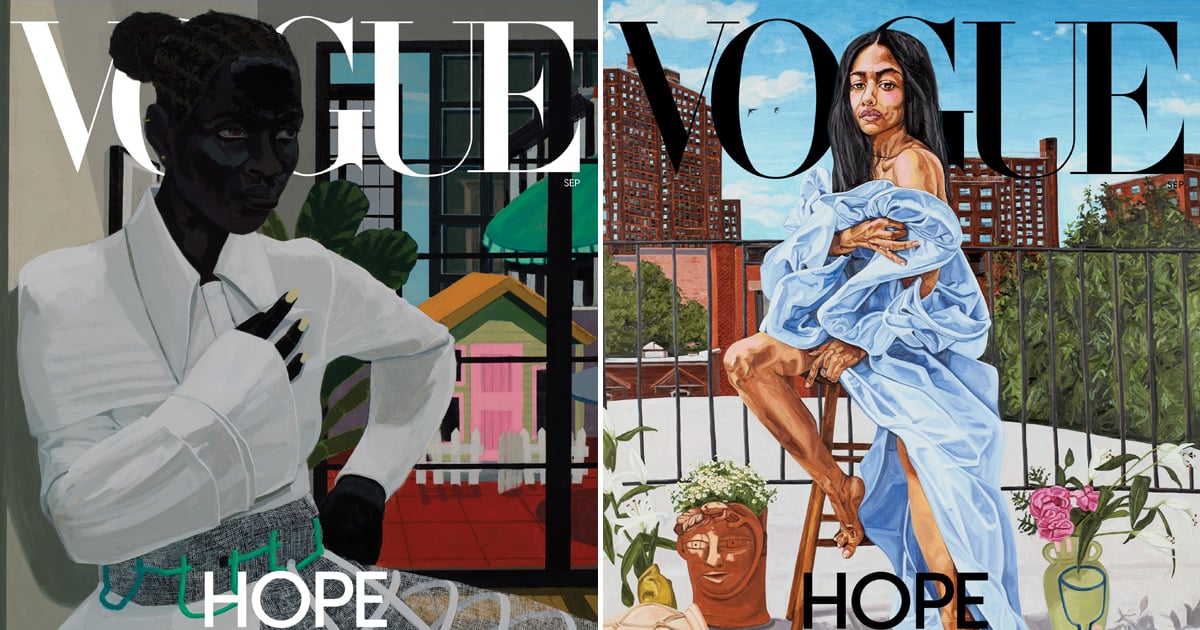 Vogue‘s September issues are always the most highly anticipated of the year, jam-packed with aspirational advertisements, fall trend predictions, and photo spreads galore. This year, amid demands for racial justice both around the globe and within the fashion industry specifically, the magazine commissioned two contemporary Black artists to . Vogue selected Jordan Casteel and Kerry James Marshall for the task, granting both full creative control to decide who they would portray, so long as their subjects wore a dress by one of four specific designers. The resulting covers are nothing short of beautiful.

Jordan chose to highlight fashion designer Aurora James, the creative director of Brother Vellies and founder of the 15 Percent Pledge, a campaign to help support Black-owned businesses. “I believe that what Aurora is doing is hugely important in creating the long-term change that Black people deserve and this country owes us,” the New York City-based painter told Vogue. “I see her as a light in a lot of darkness and a potential for hope, a representative of change across all creative industries.”

For her cover, Jordan painted Aurora wearing a voluminous blue Pyer Moss dress as she sits on a wooden stool with a single Brother Vellies shoe nearby. Jordan carefully wove in various under-the-radar details to denote a sense of hope to viewers. For one, Aurora’s left foot is firmly pressed against the ground of her Brooklyn apartment rooftop, “propelling her upwards into the world above her” and helping her step “into the space of real possibility,” she explained. The distant windows are painted the same light blue color as the sky, so as to encourage the building’s inhabitants to embrace the boundless opportunities of the outside world.

Kerry, on the other hand, went a slightly different route for his Vogue cover painting, depicting an imaginary woman wearing a white asymmetrical dress by Off-White and sitting in front of a window. The Chicago-based artist wanted to illustrate her as “self-possessed” by making her stare off into the distance rather than directly at the viewer. “I’m trying to build into her expression that she’s not dependent on the gaze of the spectator. ‘I’m here and you can see me, but I’m not here for you,'” he told Vogue.

The skin tone of his fictional subject, however, is the most paramount detail Kerry focused on. “[Their skin is so dark that it is] at the edge of visibility,” he said, adding, “The point is to show that blackness is rich and complex, within the blackness alone.” He mixed various paints while painting her face, adding in a pop of orange eyeliner only detectable upon zooming in. “If you say, ‘Black is beautiful,’ you have to show it. And what I’m doing is showing it at the extreme. Yes, it is black – very black – and it is very beautiful.”

The two September covers, though statement-making, don’t erase Vogue‘s past missteps in regards to inclusivity. Just last month, the publication sparked criticism for its portrayal of August cover star Simone Biles. Many believed the photos, snapped and edited by Annie Leibovitz, didn’t accurately celebrate Simone’s skin color and natural beauty, and that the magazine should have shined the spotlight on a Black photographer instead. The publication still has a ways to go in terms of promoting diverse voices, but its September 2020 covers are certainly a step in the right direction.