Skip to content
Home » The SATC Reboot Is Officially Filming, and Carrie’s Style Looks So Different 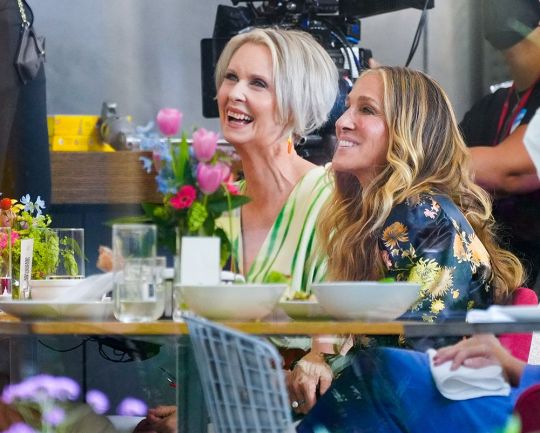 I don’t know about you, but I spent last night watching the first episode of the new Gossip Girl reboot. Now, we have yet another revival to look forward to because the new Sex and the City show officially began filming in New York City. That’s right: Carrie, Miranda and Charlotte are back in action and wearing some very on-brand outfits for each of their characters. (Sadly, Samantha will not be part of the new spin-off, and her sassy ensembles and witty one-liners will be sorely missed.)

Thanks to paparazzi images, we have the very first look at what the ladies are wearing in the show, which will be called And Just Like That… Naturally, shoe-obsessed Carrie is wearing some statement sky-high platform heels with her flouncy skirt and T-shirt. Meanwhile, Miranda is all business in wide-leg Vince trousers, while Charlotte is looking every bit the Upper East Sider in an off-the-shoulder blouse and Dior heels.

Some signature styling pieces are present, such as Carrie’s penchant for corsages, but there is a noticeably more bohemian lilt to Carrie’s ensembles this time around, with flowing fabrics, hippy braids, print clashes, eclectic layering and quirky #cottagecore-style accessories a-plenty. The new costume designer for the show, Molly Rogers, worked with former lead Patricia Fields on the previous series, so if anyone could understand where to take 50-something Carrie’s wardrobe, it will be someone who has already analysed it inside and out.

Scroll down to see photos and outfits from the Sex and the City reboot.

Next: Our take on autumn’s top trends.

This story was originally published on Who What Wear U.S. and has since been updated.