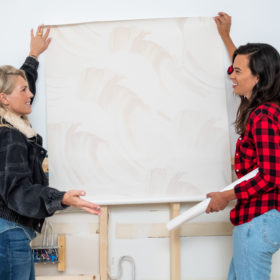 When COVID-19 was declared a pandemic in March 2020, April Brown and Sarah Sklash were elbow-deep in their renovation of a rundown 1970s motel. Facing strict time constraints, a dwindling budget and an ominous uncertainty brought on by the pandemic, the Canadian entrepreneurs had a turbulent journey ahead of them — and it was all filmed for a Netflix original show, Motel Makeover.

The six-episode docuseries takes viewers alongside Brown and Sklash’s process of gutting, renovating and launching The June Motel in Sauble Beach, Ontario during the thick of the pandemic. Luckily, the best-friends-turned-business-partners don’t shy away from a challenge. In 2016, they both quit their desk jobs in Toronto to follow their entrepreneurial aspirations and open their first motel property, The June Motel in Prince Edward County. But for their second motel renovation, things were more complicated, to say the least.

The Sauble Beach motel property was Brown and Sklash’s biggest undertaking yet, consisting of 24 guest rooms, a swimming pool, a restaurant, a gift shop and a lounge. Reimagining the outdated property involved numerous revised paint coats, debates over vintage decor items, and self-posed questions like, “Is this charming or hideous?”

From animated discussions about their love for rosé to teaching their small-town contractor, Rick, what a mirror selfie is, the pair bring a lovable charm to the project — despite its never-ending curveballs.

“There were a lot of firsts that we had to tackle on this project alone, and that would have been a challenge in itself. But then you layer on a camera crew following you around every day, and then you layer on a global pandemic,” says Brown. The motel rooms had already been completely gutted when the pandemic hit, so the only option the pair had was to continue with the project, despite having lost money and time.

“[During] that whole period of lockdown, there were almost daily conversations of, ‘What are our options? How are we going to move forward? Do we have money? Are we going to run out of money?’” recalls Brown. “And that was like, the scariest moment probably of our lives — definitely of our career.”

When the first lockdown hit, while the rest of the world was largely stuck at home, Sklash, Brown and the renovation’s project manager Courtney Mann were stuck at work — living together in the apartment above the motel’s restaurant. The business partners leveraged their homes and their first motel for this project, but the pandemic forced them to halt construction for months. “There were some really scary moments,” says Sklash. She recalls thinking, “It’s possible we could lose the business. We could lose our homes. Who knows?”

Despite the stress, they managed to create some fond memories during that time, one of which was watching Schitt’s Creek — a comedy about a once-wealthy family who loses their fortune and is forced to move into a small, run-down motel. Sound familiar? “It was just this very relatable experience,” says Brown. After months of delay, they were able to realize their vision for The June Motel’s Sauble Beach location and finish the renovation.

Motels aren’t the first thing that comes to mind when you think of a glam getaway, but Brown and Sklash see them as blank slates. The June Motel has a retro, throwback feel, and these characteristics are often found in motels to begin with. Plus, they’re budget-friendly.

“We were young entrepreneurs and really the only thing we could afford was not that beautiful beach resort, but it was the dingy roadside motel,” Sklash says about the decision to buy their first fixer upper in Prince Edward County. “That’s really why we got started, but [we] have just been charmed by them ever since.”

Now that renovations are complete, The June Motel radiates a beach-y vibe, punctuated by pops of colour like neon signs and statement wallpaper. The space was designed by Brown and Sklash with the goal of creating Instagram-worthy moments.

“We really are constantly taking our phones out and taking photos of it as we go through this design process, because we want to see how the colours show up on camera,” says Brown. With over 82,000 Instagram followers at the time of publication, The June Motel has become an aesthetically pleasing oasis for travellers and influencers alike.

Brown and Sklash are ready to do it again. The pair are building a “motel empire” one eventful renovation at a time. In fact, they’re already planning to start searching for their next motel in fall 2021. “We don’t know where it’s going to be,” says Sklash. “We’re going to be looking for that diamond in the rough property.”

The post Meet the Best Friends Who Opened an Instagram-Famous Motel During the Pandemic appeared first on FASHION Magazine.