Skip to content
Home » Meet the TikTok-Favorite Met Gala Dress . . . That Never Made It to the Red Carpet 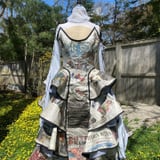 When sustainable fashion designer Anna Molinari initially created a dress made out of newspaper headlines she’d collected from March 2020 to March 2021, she wanted it to serve as both a memorial to all of those we’ve lost and a reminder that there is still much work to be done. But one viral TikTok and one Met Gala later, people are dubbing the dress their favorite Met Gala look this year – and it wasn’t even worn at the event.

The incredible dress – or work of art, as many TikTokers have called it – features a fully boned corset, a mesh turtleneck that can be worn over the mouth and nose, and a cold-shoulder cutout for the vaccine, all made of recycled newspapers covering the good, bad, and ugly happening in America, from COVID-19 to the Black Lives Matter movement and the election.

“I made the dress because the vaccine was starting to be widely administered and I felt like there was this mentality of, like, ‘Got the vaccine, everything’s fixed, good to go, like, let’s have fun,’” Anna explained in a TikTok. “Meanwhile there’s still so much work we need to do as people and in this country especially. Aside from being a sign of the times and memorial to all those we’ve lost, I wanted this dress to inspire people to do better.”

Anna, who owns reworked secondhand apparel brand Instinct, first shared the dress on TikTok in early September, when she realized it would be the perfect fit for this year’s Met Gala theme, “In America: A Lexicon of Fashion,” with a dress code described as “American Independence” made for fashion rebels and rule breakers.

Her video, which now has over four million views on the platform, was immediately flooded with comments praising the piece, and tagging stars people would love to see wearing the dress, namely Zendaya and Lady Gaga. While the dress sadly didn’t make it to the Met, TikTokers are keeping the spirit alive as the videos continue to reach millions. Ahead, get a closer look at Anna’s creation from all angles, as well as the process behind the design.

28 Celebs Who Got the 2021 Met Gala Theme Absolutely Perfect