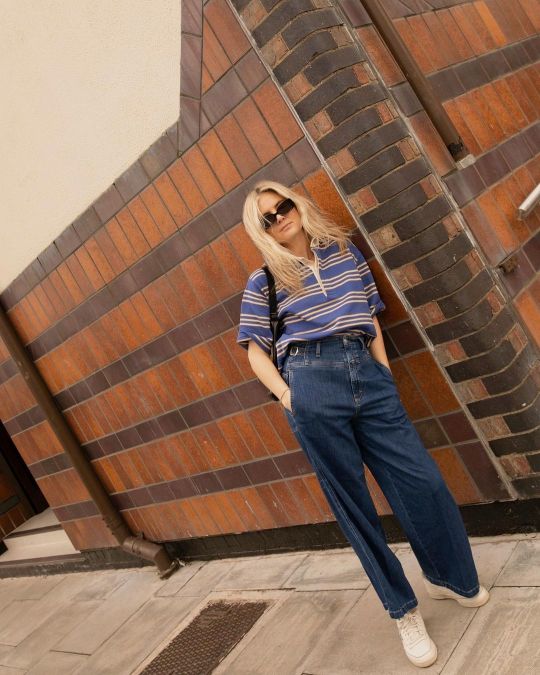 At some point in the recent past, someone decided to merge the two worlds of athleisure and Princess Di together and come up with the term ‘sporty and rich’. Unlike the aforementioned atheleisure trend, this isn’t just about adding a pair of Adidas trackies to a white shirt or some other similar iteration, this is about channeling a classic sportswear piece but as if you’ve just finished a game of tennis or heading out of a swanky members club gym.

Right now the piece that epitomises this look is the rugby shirt for women. It’s been bubbling away for a while. Ganni created an orange and black version adorned with sparkly buttons a couple of seasons ago, which I spotted on Abisola Omole. And I’ve also seen Lucy Williams wearing a short-sleeved version which is just as cool when worn with the denim of the season, baggy jeans.

Of course, we have to again mention Princess Diana who wore this top frequently but with a chic camel handbag and a pair of white jeans. During New York Fashion Week, I saw a rugby shirt paired with loose, flowing pleated trousers and a pair of chunky black sandals, which is 100% a look I’ll be wearing if we ever get warmer weather in September. If you’re inspired to see how to wear a rugby shirt, keep scrolling and then shop our edit.

Next up, the biggest autumn/winter 2021 fashion trends to know.