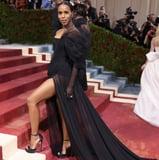 This year marked the Met Gala’s return to its traditional calendar date, and despite its COVID-19 hiatus, the highly anticipated event continued to challenge its star-studded guest list to bring their sartorial A game. While some invitees delivered on the 2022 theme, such as Nicola Coughlan in Richard Quinn and Blake Lively in Versace, many chose to give it their own spin. “Gilded Glamour” immediately brings to mind opulent gowns and accessories such as vintage pearls and satin gloves, like those you’d see on “Bridgerton,” but some celebrities revived the naked-dress trend, making their appearances in sheer, head-turning dresses.

Kerry Washington, who’s no stranger to fashion’s biggest night, appeared in an all-black Tory Burch number composed of a leg-baring slit enhanced with a corset and accessorized with sheer black gloves. Supermodel Bella Hadid also wore black to the event, donning a corseted Burberry look with a sheer skirt and tights stitched with intricate lace detailing. On the other hand, Cynthia Erivo paid homage to the Black community with her ode to women from Louisiana in the 1800s, choosing an all-white Louis Vuitton look that included a sheer, sleeveless top.

Some stars even pulled off the trend by emitting classic glamour, with Maude Apatow wearing a sheer black Miu Miu gown with an off-the-shoulder silhouette with a sweetheart neckline. And Kim Kardashian wore Marilyn Monroe’s infamous “Happy Birthday, Mr. President” dress, embellished with over 6,000 crystals. “Nowadays, everyone wears sheer dresses, but back then that was not the case. In a sense, it’s the original naked dress. That’s why it was so shocking,” Kardashian explained to Vogue about the original Jean Louis piece.

Meanwhile, newlywed Nicola Peltz Beckham appeared with husband Brooklyn while wearing a pink Valentino gown, accentuated with a fully sheer cape and plunging neckline, reminiscent of her appearance at last year’s “In America: A Lexicon of Fashion” gala.

Ahead, scroll for all the stars who brought back the sheer-dress trend at the 2022 Met Gala.