Hugger, high-fiver, or cheek-kisser? Your greeting style says a lot about your personality 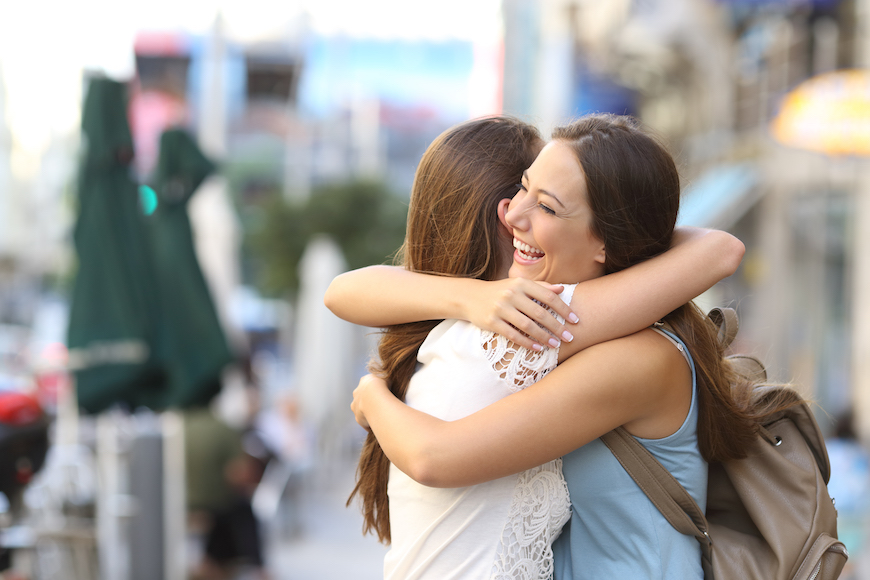 I’m convinced that one of most cringeworthy feelings that can be experienced in life comes as a result of going in for a hug and being met with a handshake from the other person. Take a second now to imagine those uncomfortable fragments of a second when the handshaker’s arm sort of snakes into an adjusted position that could lend itself to either greeting, until one gesture inevitably wins out. Makes your skin crawl, right? While there are so many different ways of saying hi, hugging and handshakes tend to simply not mix, and the overarching reason for this may well have to do with the two tendencies reflecting very different personality types.

While there’s no one explanation for how someone ends up as a hugger or a handshaker, but the way you’re socialized certainly plays in. One 2012 study published in Comprehensive Psychology asserts that how we react to physical touch is “is an important element in a child’s emotional upbringing,” and can influence our behaviors into adulthood. For instance, if your childhood resembled a string of Full House episodes, you’re likely to be a big-time hugger in adulthood. And if your childhood was all about the stiff upper lip, you may not be so inclined to show affection upfront. So regardless of your preference for ways of saying hi, you can feel okay about foisting at least some blame on your parents.

And if your greeting style doesn’t fall in either category? Well, given that I’m an ever-so-opinionated people-watcher, I I’m a great source for outlining how different ways of saying hi say can reflect someone’s personality. Check them out below:

You approach life with an open heart and open arms. You skew extroverted and nearly always seem to be smiling. While all of this is great, you could certainly stand to sharpen your skills for reading people—because not all people are thrilled to receive hugs.

Many interpret this gesture as very formal and businesslike, and sometimes that’s exactly what it is. I don’t go on job interviews giving out giant bear hugs, will-nilly, and I don’t know anyone else who does. If your default move is a handshake, that hardly brands you a cold, formal freak. Rather, all it really means is that any kind of intimate greeting (where you get close enough to smell someone) has to be really, really earned.

The side-hug cuts out bit of awkwardness that might be sustained from offering a hug that gets denied, but that’s only because it’s super-casual and noncommittal—even if it’s well-thought-out and planned. Any way you slice it, a side-hug doesn’t mean too much, and that’s by design. It’s best used when a handshake feels too formal, but you don’t feel a full-fledged hug is totally appropriate in the given circumstance. A side-hug means you’ve made a lot of compromises with the universe, and this is where you feel comfortable landing.

If side-hugs are quietly awkward, high fives are a high-energy, bro-y breed of awkward. There needs to be a reason for invoking the high five—and simply meeting up with a friend for happy hour isn’t a good one. High fives are best reserved for workout classes, when the instructor asks you to high five your neighbor. In fact, I can’t think of any non-athletic environment where a high five is an acceptable greeting style.

You’re very, very shy and are doing your best to be friendly. Some may describe you as a “cutie pie.” Though it may seem strange to try and communicate a hello without any verbal context, a little wave sends a clear message of, “I happily acknowledge your presence but I need a hula-hoop’s radius worth of personal space until we become better friends.”

You are one of two heterosexual men who are acknowledging each other’s presence while honoring your extreme fear of showing anything that might resemble affection. Or, you just ran into one of your high school classmates at your hometown bookstore and this is a way easier way out than giving in to a real conversation. Nodding means you’re expressing  dominance and not committing to a more vulnerable hello. It’s a power move.

Of all the ways of saying hi, this one is reserved for meeting someone you’ve heard so much great stuff about before the run-in. In this context, it makes a lot of sense to bask in the moment of the divine union, with an elaborate response like this one. And if this is a common greeting you lean on for addressing your sister and barista alike, please DM me. I’m genuinely curious about your non-discerning enthusiasm.

Air-kiss on both cheeks

This pretentious gesture makes no sense unless you’re very European or super rich. So, if you’re doing a double-kiss in the States, chances are you’re an influencer channeling the certain je ne seis quoi of a first-class-flying socialite. But, IMHO? Just don’t do it. Zero ways of saying hi are less sincere.

Kiss on the cheek

If you start kissing people on the cheek as a hello, congratulations: You are a full-grown, classy adult woman. I don’t mean to be ageist, but I do find that as you get older, kissing on the cheek for a hello becomes increasingly less weird. There’s a reason it’s the go-to greeting for aunts everywhere, after all.

Now that we’re clear on what your preferred greeting style says about you, here’s what to know about email sign-offs. And if you’re firmly on Team Hug, here are the health benefits you can get from embracing a loved one.

One thought on “Hugger, high-fiver, or cheek-kisser? Your greeting style says a lot about your personality”