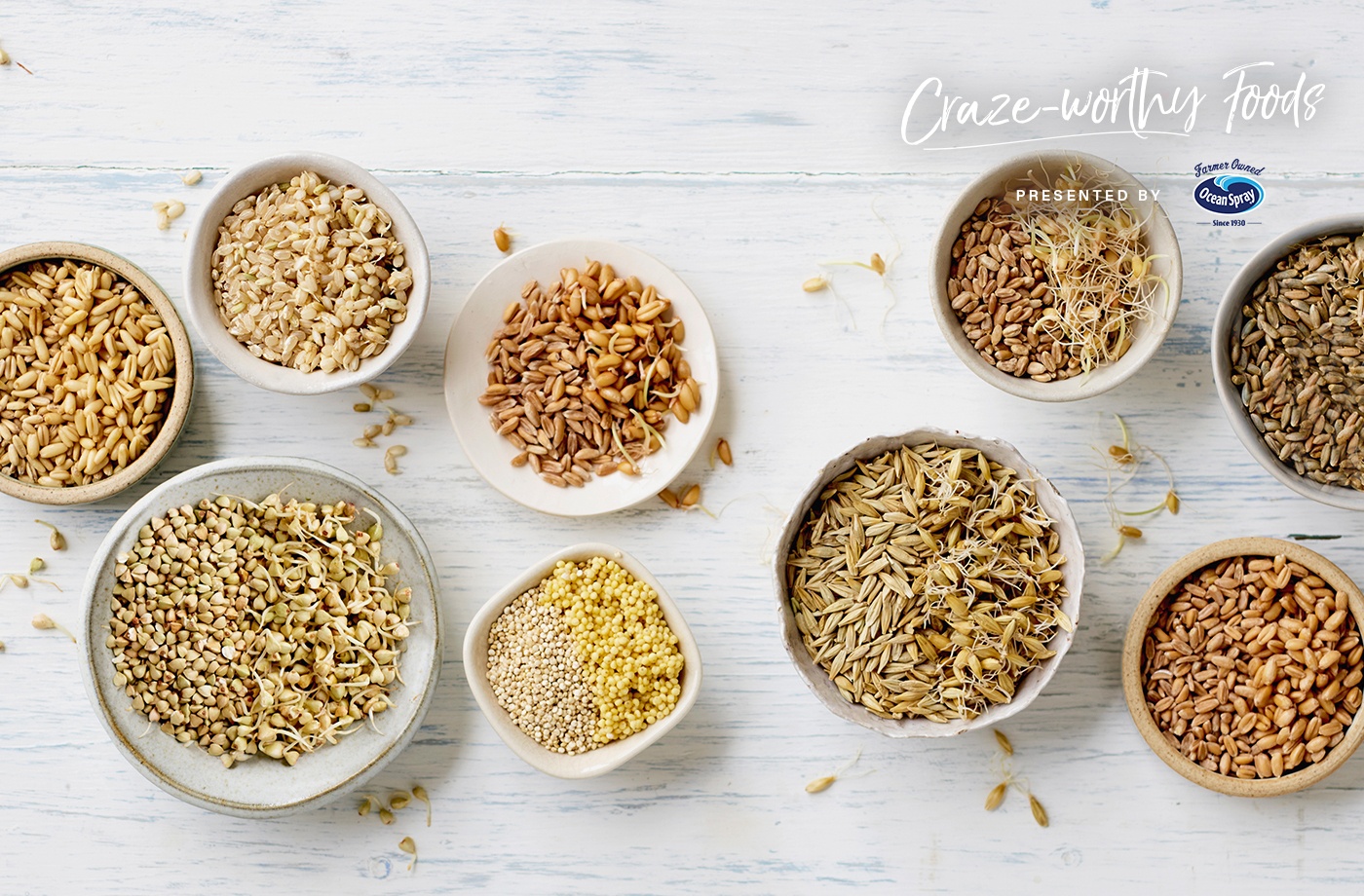 Ever have a flashback to when kale wasn’t cool (#tbt)? Well, there’s a new crew of superfoods about to hit your plates and IG feeds. We teamed up with Ocean Spray to clue you in on the trends. Learn about all six craze-worthy foods here, and keep reading to find out why the health benefits of buckwheat earned it a spot.

“Overnight buckwheaties” may not sound as catchy as overnight oats, but take this into consideration: Buckwheat is loaded with nutrition benefits, it’s super easy to prepare, and it’s the rising star of the grain-but-not-actually-a-grain world. (It’s technically a seed, or “pseudo-cereal,” like quinoa.)

And, like quinoa, the nutty-flavored groats are becoming a go-to healthy buddha bowl base (thanks in part to their knockout protein content) and giving the OG supergrain a run for its money.

Plus, despite its moniker, buckwheat doesn’t actually contain any actual wheat, making it a safe choice for Celiacs or people choosing to follow a gluten-free lifestyle. Here’s why you’ll want to consider scouring the #buckwheat feed on Instagram and adding the superfood to your grocery list.

Keep scrolling to discover the health benefits of buckwheat, plus all the ways you can start eating it.

You’re likely to find buckwheat taking one of two forms: Buckwheat groats are the hulled seeds from the plant, while buckwheat flour is ground from the seed hulls. In both forms, it’s anti-inflammatory and high in fiber, making it easy on the insides and a boon for digestive health.

Buckwheat is also a choice answer for vegans who are constantly prodded with the “but how do you get enough protein?” query. “One cup of [cooked buckwheat groats] has around six grams of protein,” says Eliza Savage, RD at Middleberg Nutrition. “That’s almost the amount of one large egg.”

Nutritionist and pharmacist Barbara Mendez adds that buckwheat is slow to digest with a low glycemic index (so it doesn’t spike your insulin levels), helping you feel full faster without the energy spike-then-crash of less-complex carbohydrates like white rice.

For an added bonus, buckwheat may also be good for your mental health. “It contains magnesium, which has been shown to help a variety of conditions, such as improvement of bowel function, and the prevention of bone loss and heart disease,” Mendez says. “Magnesium [can] also help alleviate anxiety.”

Buckwheat has long been a staple ingredient in eastern European foods. Now, it’s finding its rightful spotlight in the United States, both among the high-end-in-the-city set and the DIY crowd.

In New York City in particular, brunch hotspot La Mercerie offers buckwheat crepes on its menu, while Michelin-starred chef Alain Verzezoli whips up acclaimed buckwheat puffs at the uber-sophisticated Le Jardinier. And if you’re lucky enough to reside in Manhattan’s swanky 432 Park building, you’ll be privy to the residents-only eatery, where the offerings include an imported buckwheat butter.

And in spite of a name that’s perhaps more reminiscent of The Little Rascals than beautiful brunch bowls, the humble #buckwheat tag has 340,000 posts—almost all of which are, well, Insta-worthy. (Vegan and plant-based Instagrammer @arlaeats recently shared a buckwheat-based greens and grain bowl recipe with her 525,000 followers—more than 4,000 of which deemed it double-tap-worthy.)

How to use it

Pancakes, and porridge, and pie crust, oh my! Buckwheat can be subbed in as a base or flour mixture for most sweet and savory recipes that call for flour or a grain. And forget grinding your own: Time-saving brands like Bob’s Red Mill sell buckwheat in both groat and flour form.

Use buckwheat groats as a base for homemade granola, a served-cold side salad, or to replace the oats in overnight oats (all of which pair well with the tart sweetness of dried cranberries added to the mix). Transform your next at-home brunch into a gluten-free feast by subbing buckwheat flour in your next batch of crepes or pancakes.

You can also blend raw groats into a smoothie or add them to a smoothie bowl for an added crunch and nutritional punch, or take a yummy cue from London-based runner @milesbeforebreakfast, who crafted a drool-worthy recipe for a chocolate buckwheat chia and coconut parfait. Crushing 17 early morning miles? No problem when you have a superfood-loaded, protein-packed breakfast waiting for you.

In partnership with Ocean Spray