Skip to content
Diet, Keto, You and your body

Make healthy eating easy thanks to this technique used by the U.S. Army 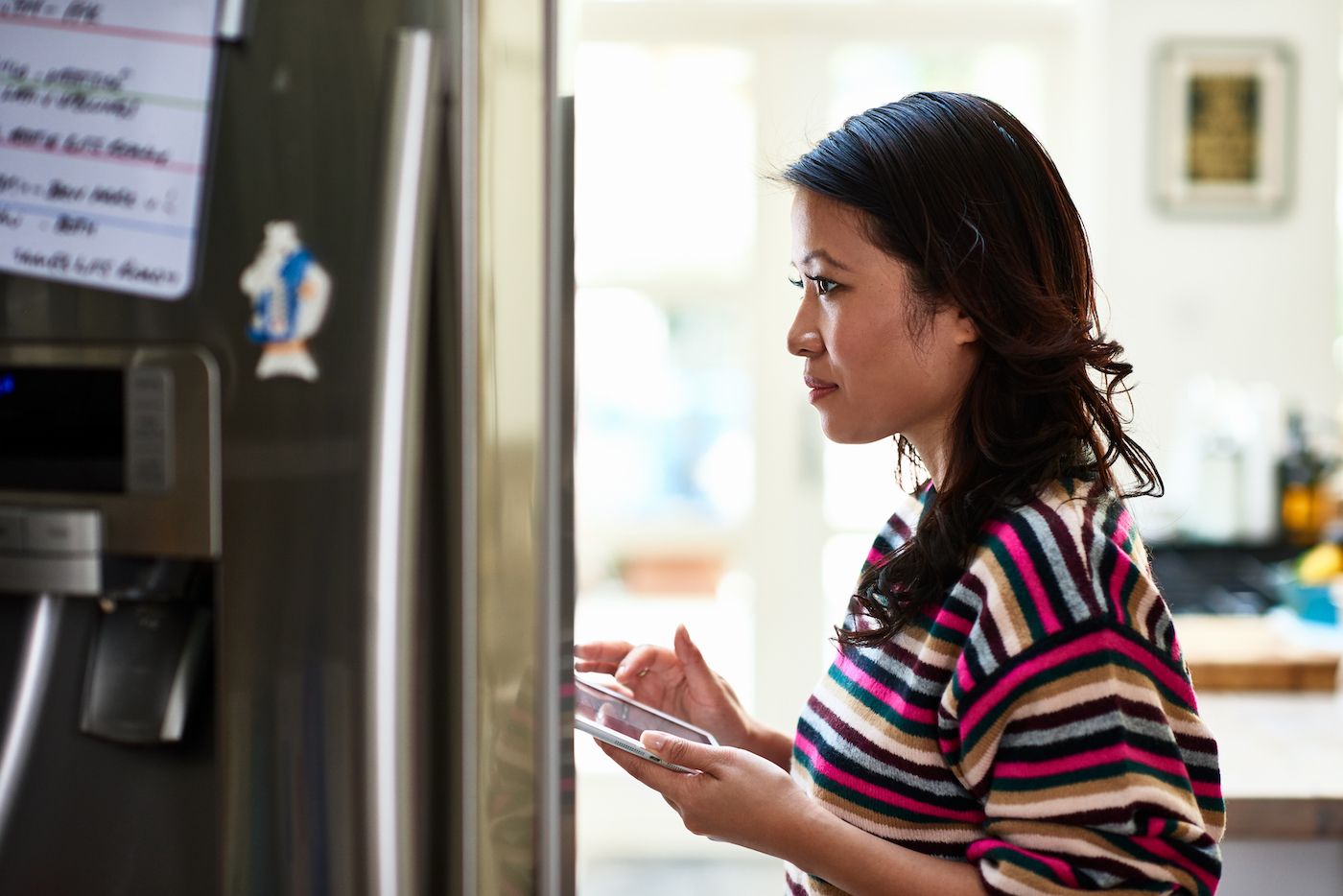 The word “cafeteria” transports me back to my high school days of shuffling through the lunch line with hundreds of equally-hungry teenagers. The chicken was dry, they (somehow?) managed to ruin pizza, and breakfast-for-lunch days were the only silver lining. So imagine my surprise when I learned that you could eat healthy in a cafeteria…if you go to one run by the U.S. Army.

Army cafeterias operate under the “Go For Green” system (a version of the Stoplight Diet), which was started back in 2011 by General Mark C. Hartley, MD, of the Center for Initial Military Training as part of the Soldier Fueling Initiative. “What he saw was that recruits were really struggling in initial military training just based on their physical fitness status and their nutrition status,” says Maj. Brenda Bustillos, PhD, a nutritionist with the U.S. Army. The “Go For Green” program remedied the problem with a two-fold solution: labeling all prepared foods as red, yellow, or green, then redesigning the dining facilities (“D-facs”) to better direct troops toward performance-boosting foods.

Once you know what foods belong in which color category and why (which we’ll touch on in a sec), the system becomes an intuitive, easy, and surprisingly fun way to game-ify your own healthy eating goals and habits. Even if you don’t have a gymnasium-sized “D-fac” in your own home, you can totally use the army’s system to stock your fridge and prepare meals that meet your specific nutritional goals.

Atten-hut! Here’s an inside peek at the  U.S. Army’s “Go for Green” color-coding system.

Practically every army cafeteria features red, yellow, and green placards posted at the salad bar, grill station, and hot food lines. To the troops and trainees, these labels signal which foods should make up the biggest portion of their plates (green), which should be eaten in moderation (yellow or amber), and which should be enjoyed sparingly (red).

The red label might seem negative, but Dr. Bustillos tells me that’s not the intention. She says the stop sign color is just a visual signal for troops that the nutrients found in those particular foods (which are normally high in saturated fat, sugar, or both) won’t necessarily serve them in training and combat. “The goal was to identify those foods that were performance-enhancing, and then to have our trainees and our private party folks also to be able to identify the foods that were not performance-optimizing—and those are our red foods,” she says. From there, the color system evolves logically. Yellow or amber foods are a bit better for fueling you up, but the ones that fall under the green category are what Dr. Bustillos and her colleagues hope to see appear the most on the troops’ plates.

The “Go For Green” program’s nutritional suggestions are very much in line with the golden rules of healthy eating you’ll hear from many doctors and dietitians nowadays. Just remember though, if you’re following a particular eating plan like the Mediterranean, ketogenic, or Paleo diet, you can tweak which food groups belong in each category. (For example, someone on the Paleo diet wouldn’t have any grains or legumes in their “Green Zone,” since those foods are off-limits on that eating plan.)

Got all that? Here’s how to translate it to your own home cafeteria. 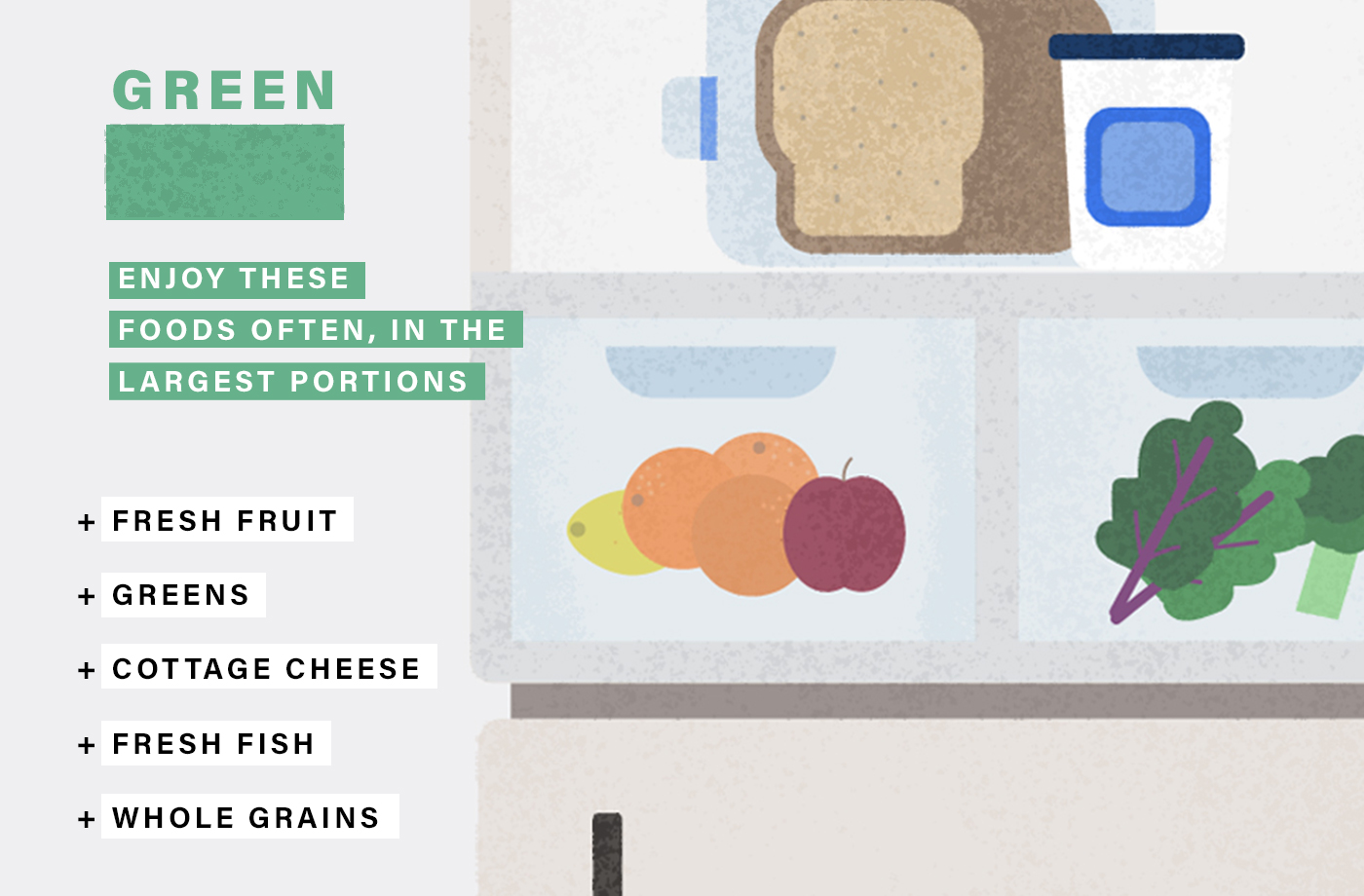 Overview: These foods are minimally processed, packed with fiber, low in added sugar, and filled with healthy fats.

According to Dr. Bustillos, swapping frozen pre-packaged foods with locally-sourced whole foods is a hallmark of the Solider Fueling Initiative. The program also seeks to make healthy foods that normally are hard to eat—like fresh fruits—easy to grab on the go. For example, the D-facs now serve pre-cut fruit that can be easily poured over cottage cheese for a breakfast or snack that’s fibrous and full of protein.

As for main entrees, the nutritionist says they try to make lean protein a menu item as often as possible. “We provide them with fresh fish options on our hot bar, so maybe lightly-seasoned talapia,” she says. And, of course, the salad bar is home to a lot of the leafy greens and other energy-boosting foods.

TL; DR: This shelf in your refrigerator should look like rainbow, with your healthy protein of choice and favorite grain sprinkled in for good measure.

Yellow: foods to eat in moderation 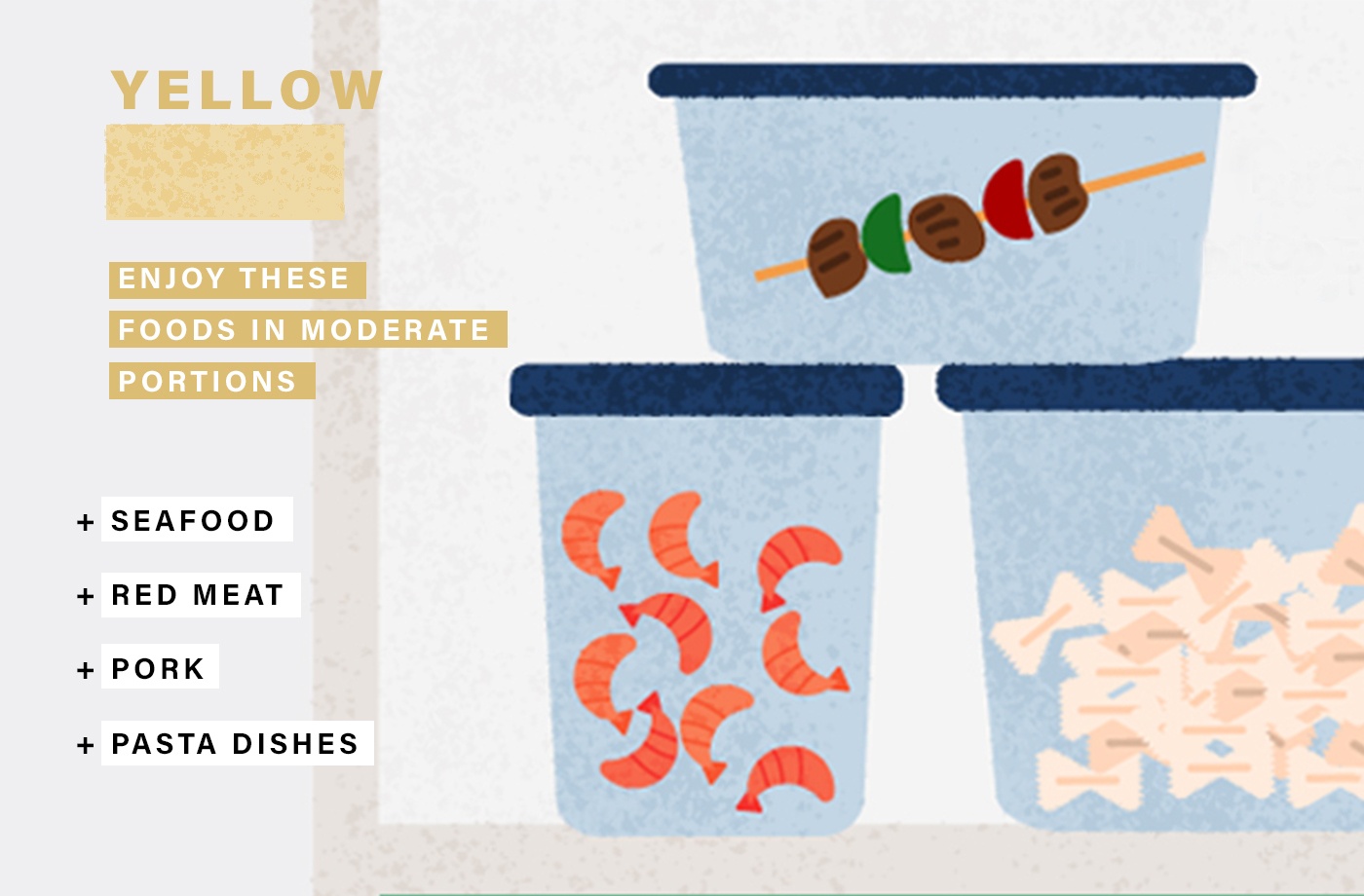 Overview: These foods undergo some processing, contain some healthful nutrients, contain a fine amount of fiber, have some added sugar, and are packed with a mix of saturated and unsaturated fats.

If you sift through the army’s example menus, you’ll notice that a lot of foods that fall under the yellow category contain protein with saturated fat (like a hamburger), are topped with a heavy sauce (like shrimp jambalaya), or contain a processed grain (like white pasta). Dr. Bustillos says this category is smack dab in the middle of the two others because, while they don’t have the nutritional fortitude of the green, they are still okay to eat in moderation each day.

TL; DR: This shelf of your refrigerator should be made up of dressings, sauces, and dips that make the items on your green shelf even more tasty. It’s also for heartier meats and proteins that you only enjoy a few times a week.

Red: The foods to eat sparingly 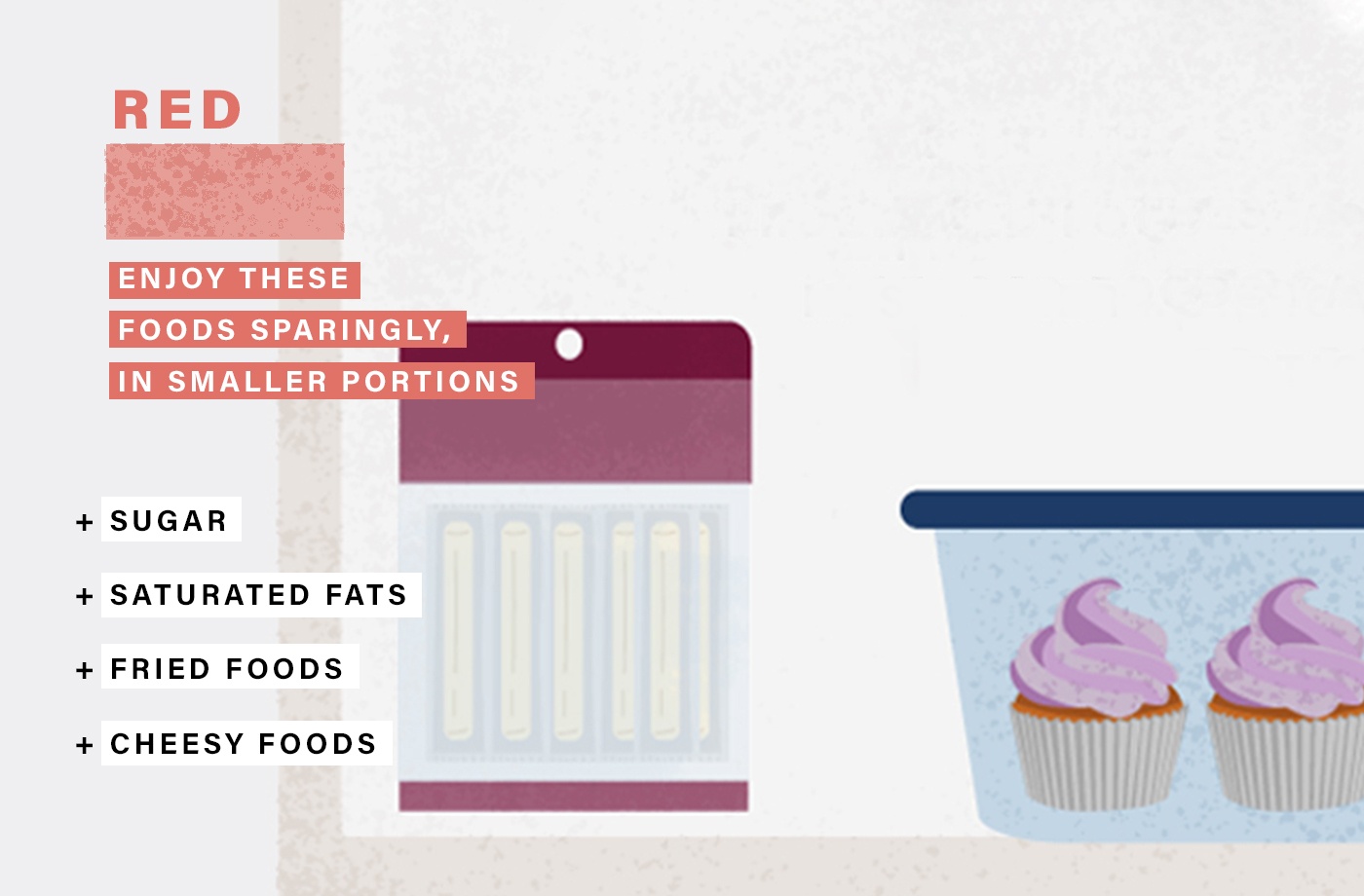 As previously mentioned, it’s important to note that red does not equal “bad.” Health experts will tell you that cutting any and all sugar out of your diet isn’t a nutritional fit for most people, and despite sugar’s bad branding, it can have a place in a healthy diet. The “red” label is really just signaling you that these foods shouldn’t take up a lot of room on your plate. Once you’ve loaded up on green foods and added some yellow, a small red food fits in perfectly with your meal.

TL; DR: Give these foods the least amount of room in your fridge, but remember: They still have space there, just like they have space in your diet.

Here’s an army nutritionist’s advice on picking the best granola bar, and all the intel you need on their brand-new fitness test.