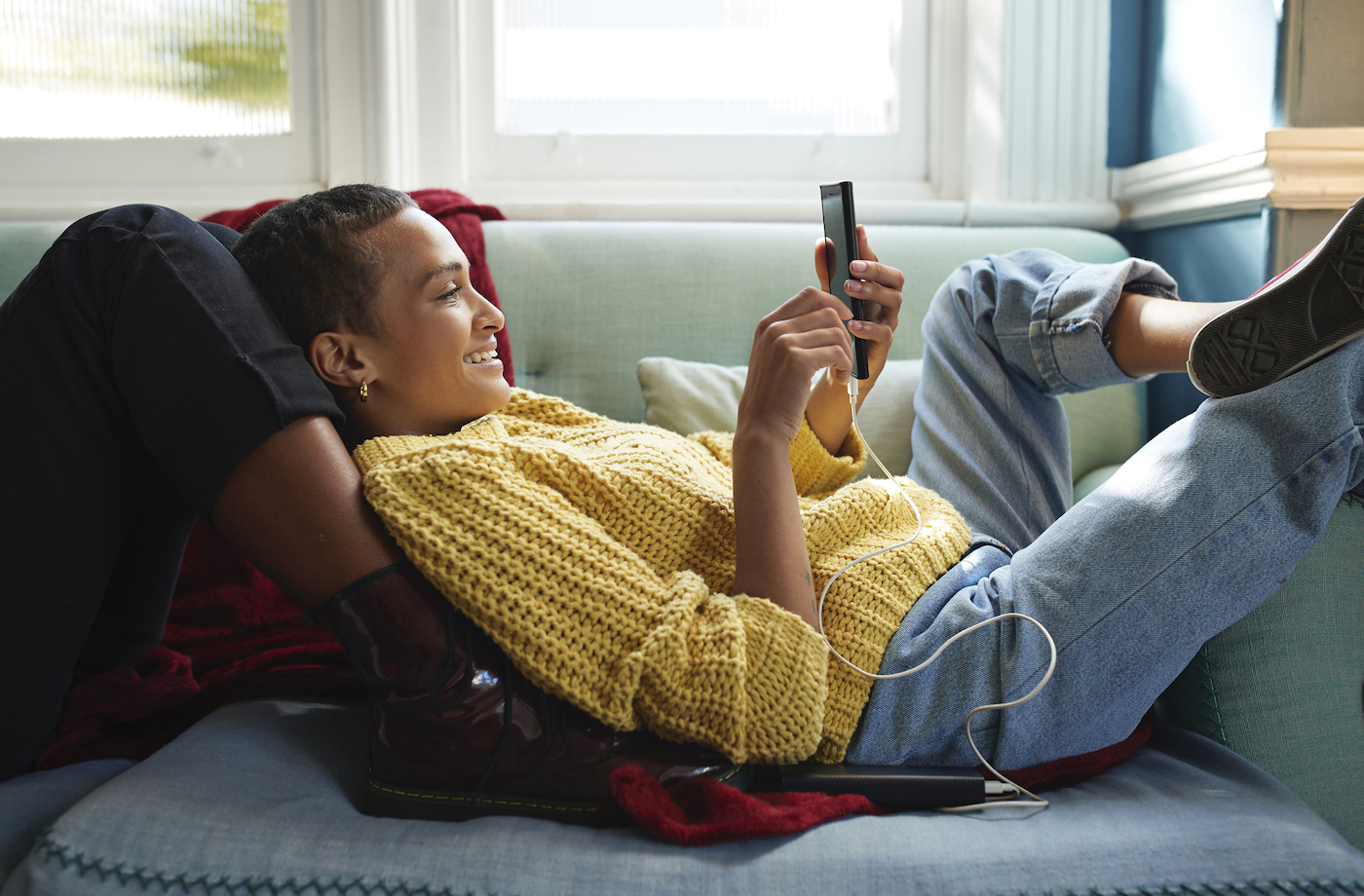 “The early bird gets to cry for a little bit longer in the work parking lot.”

When looking at this Instagram post shared by the account mytherapistsays and liked more than 100,000 times, it’s hard to believe Instagram was once a medium used almost exclusively as a digital photo diary. Today, hilarious memes and text-heavy inspirational and educational posts dominate many a feed—and the seemingly exploding number of mental health accounts are responsible for a lot of them.

The actual content varies widely—some posts are memes about everything from anxiety to childhood trauma; others are helpful cartoons and simple illustrations; and others still are straightforward, guiding text—but there’s a relatability that clearly hooks followers and inspires them to share.

*tears streaming down my face* rise n grind! let’s get that bread!

It makes sense, considering one in five U.S. adults experience mental illness each year. But just because these experiences are common doesn’t mean that they have always been fodder for public discourse, much less viral social media content. Despite Instagram’s reputation as a mental wellness killjoy, posts like these—in addition to being entertaining—can help chip away at the silence, stigma, and ignorance that still surrounds mental health discussions to this day.

Instagram as a force for positive mental health change

So why are these mental health-adjacent posts—whether they’re meme accounts, or earnest advice-driven posts—so popular? For one thing, “they’re validation of experience,” says media psychologist Pamela Rutledge, PhD. “It’s somebody saying, ‘This resonates with me, I’m sharing it, somebody else feels that it resonates with them.’” That helps normalize someone’s experience with mental illness, Dr. Rutledge says, whether it’s sadness from a breakup or past experiences with trauma.  “That’s a very healthy thing.”

While mental health disorders should certainly be taken seriously, there’s also value in approaching them with humor, as long as it’s not in the form of making fun of mental illness or painting it in a negative light, Rutledge says. After all, she points out, laughter can actually have physiological benefits.

Even seemingly simple or surface-level posts, like the above-mentioned “early bird gets to cry” post, can have a deeper impact, says Dr. Rutledge. “What [that post] is doing is saying, ‘It’s okay not to be perfect. It’s okay to not be the guy with the worm,’” she says. We unconsciously hold ourselves up to that comparison-based, perfection standard and feel bad if we don’t deliver, she continues. “[That post says] ‘here’s this thing you’ve been beating yourself up over, and we’re making fun of it because it’s not always true.’ It’s a pressure release.”

Beyond that immediate feedback, these Instagram posts can also serve as a reminder that therapy IRL doesn’t have to be 100 percent serious, either. “The very serious [image of a] white, cisgender man sitting in a big chair—that therapy is dying out,” says therapist Andrea Glik, LMSW, who has an active professional Instagram account herself. “My clients and I laugh; my clients and I make jokes; my clients and I look at memes together. It’s playful. There’s always room for sadness and seriousness, but it’s not as cold and clinical as it used to be, and I think those memes encourage people to look at therapy as being something that could be more that way.”

It’s not just the funny posts that can be beneficial. When Glik, who specializes in somatic therapy (focusing on the nervous system and the body’s response to trauma), first started posting educational content on Instagram, the response from her followers encouraged her to do more. “People were engaging with the content and [saying], ‘I didn’t know this,’ ‘I wish I had known this,’ [and] ‘Why isn’t this more widespread information?’” she says. “It made me think about how you shouldn’t have to go to social work school to know what an abusive relationship is; you shouldn’t have to go to a somatic training to learn what the nervous system is. This is very important information for all humans to have access to…It shouldn’t be privileged information.”

Sifting through the noise

Of course, as with any information you come across online, it’s important to view it with a critical eye. “Don’t just assume because it sounds right that it is right,” Dr. Rutledge says. “We can’t presume truth in a world where all information gets equal voice. The good news is that people have a voice, and the bad news is that it means there’s this huge mountain of information that now is our responsibility to sort through.”

If you see mental health information on Instagram that resonates with you (or that you find concerning, for that matter), do some quick research outside the app to validate that information and the source that produced it. “Look at [the poster’s] credentials, look up their training,” Glik says. “If someone says that they’re a trauma therapist, what does that actually mean? What is their background? What is their experience? What is their training?”

shoutout to my generalized anxiety disorder

It’s also crucial to keep in mind that, while so-called “Instagram therapy” posts may provide many benefits, including familiarizing followers with the idea of therapy, they aren’t actually therapy. “It is hard to really even call it ‘therapy’ at all,” says clinical psychologist Goali Bocci, PhD. “In its essence, therapy must require a form of engagement and feedback with an actual individual. There must be a give and take. So in actuality, what we are seeing on Instagram is what we often refer to in therapy as a form of psychoeducation.”

That’s a disclaimer Glik makes herself as well, noting that while psycho education is a “core building block of therapy” and can be “liberating and freedom-creating,” it doesn’t actually replace a relationship with a therapist. “It really is important that people pursue that healing relationship. We heal through connection with other people,” she says—not by liking an IG post.

Dr. Bocci also stresses the importance of prioritizing that relationship. “It is one thing to use social media on a very limited basis, such as food inspiration, healthy living inspiration, etc, but that must be in conjunction with actual therapy,” she says, such as in-person work with a psychologist, one-on-one online or phone therapy, or group work. “It can come in many forms, but definitely needs to be far more active than passively looking at a screen,” she says.

Again, you also have to remember that many of the people behind these accounts aren’t experts. “The memes can be risky,” Dr. Bocci says. “They can be misread, misinterpreted, and come across as insensitive.”

Seeking therapy outside of Instagram is particularly crucial given that studies have shown that not only can social media be detrimental to mental health, but also that limiting it can be beneficial. But these Instagram therapy posts, like any other form of social media, has its own place in your life. “Social media is just a tool—like a hammer, you can use it well, and you can use it badly,” says Dr. Rutledge.

She encourages approaching and using Instagram mindfully, including when it comes to mental health posts. “Spend a few days, keep a log, see how you’re using social media, figure out why you’re using it, and then use it only in the ways that support…your goal, [whether] your goal is to feel better, get a new job, or whatever your goal is,” she says. She recommends actively questioning what you’re getting out of your time on social media. “Then make judgments about how you want to use your time and how you want to explore social media rather than just be sort of sucked in without paying attention.”

The other part of that, she adds, is allowing yourself to disengage—whether by unfollowing certain accounts, deleting the app, or even hiding ads—when social media is stressing you out or making you feel badly. “If you find yourself very sensitive to certain triggers, then you need to be careful about the media you’re consuming, just as if you were allergic to peanuts and you were reading [food] labels,” Dr. Rutledge says. “You don’t expect everyone in the world to make sure you’re not eating a peanut.” If you too often come across Instagram posts, well-meaning or not, that upset you, then it might be a good idea to log off of the platform for a while.

After all, “time off social media really is one of the absolute best things we can do for our mental health,” Dr. Bocci says. “Interacting with real people in real life is one of the most therapeutic things of all. Instagram can be a nice nudge to perhaps remind us therapy would be helpful, but definitely cannot suffice in being a dose of inspiration to radically transform our lives.”

Social media is far from perfect, but its community-building powers really defined the past decade. And here’s how one writer overhauled her relationship with social media for better mental health.