Cara Delevingne has broken her silence on her breakup with Ashley Benson, along with Benson’s alleged new fling with G-Eazy. After Benson subtly denied she and G-Eazy were in a relationship on Instagram, the actress was filmed kissing G-Eazy in a car. A source then told People that G-Eazy and Benson were romantically involved but not seriously.

“It feels like just a fling for now,” a source told the outlet. “She’s getting over a breakup.”

Fans of Benson and Delevingne’s relationship criticized her for her rebound choice on social media; some suggested she cheated on Delevingne. That prompted Delevingne to make a statement on her Instagram Story last night imploring people to stop attacking Benson.

“It’s more important than ever to spread love, not hate,” Delevingne wrote. “To everyone hating on @ashleybenson please stop. You don’t know the truth, only her and I do, and that’s exactly how it should be.” 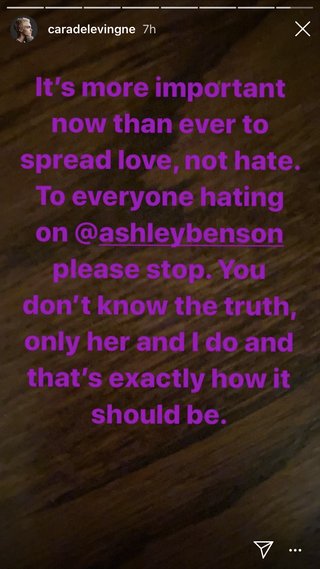 Delevingne and Benson dated for two years before news of their split broke nine days ago. People reported that there wasn’t any major incident that sparked the breakup. Their romance just gradually faded out: “Cara and Ashley always had their ups and down before but it’s over now,” a source told the outlet. “Their relationship just ran its course.”

Benson and G-Eazy, meanwhile, recently collaborated on a song and were seen grocery shopping together while wearing masks. That prompted speculation they could be dating or quarantining together during the COVID-19 pandemic.

Benson made her only statement on the matter by liking an Instagram post a Delevingne/Benson fan account shared, stressing that she and G-Eazy were just friends and assuming otherwise because Benson liked and commented on some of his Instagram posts was unfairly presumptive.

“You can’t say they are dating just because of a like and some comments,” the user wrote. “Can’t Ashley have friends now? STOP SAYING ASHLEY CHEATED! OR EVEN CARA! They just need friends right now more than ever. ✋🏼”

SHE LIKED BECAUSE SHE’S NOT DATING G EAZY! It’s a crappy edit but it’s already midnight here and I need to sleep but AGAIN, READ THE ARTICLE AND MY CAPTION FIRST 🙄🙄🙄

ALYSSA BAILEY NEWS AND STRATEGY EDITORAlyssa Bailey is the news and strategy editor at ELLE.com, where she oversees coverage of celebrities and royals (particularly Meghan Markle and Kate Middleton).

View all posts by Infocwco