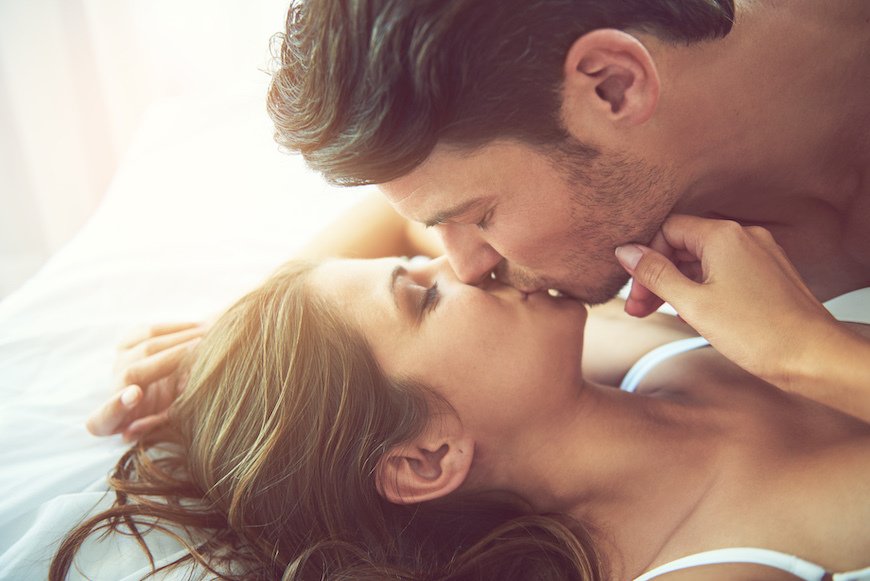 Are you able to speak properly and make rational decisions when you’re super turned on? Because I can’t. I call this having “sex brain,” and it’s way more serious than an intense craving to pounce on your crush as soon as they walk into the room. Rather, it’s an inability to think, talk, and act logically that can plague even the most levelheaded among us.

Sex brain is oh-so real and can strike in a number of ways, like jumbling words when you’re trying to talk dirty, having unprotected sex because you’re in the heat of the moment, going back on your plan to not hook up with someone after experiencing electrifying sexual chemistry in their presence, or something else entirely. There is a common denominator “symptom” of all these events, though: doing something that’s outside the realm of what you’d consider a good decision in your normal, sexually unaroused state of mind.

“Much of this sense of passion and attraction occurs in the primitive brain—the limbic system—and, thus, often produces reactive, primal behavior that ‘doesn’t make sense’ to the rational mind,” says clinical psychologist and sex and relationship expert Carla Marie Manly, PhD. Sexologist Jill McDevitt, PhD, agrees that sex brain exists, and points to cognitive overload as an explanation. “The idea is that maybe sexual arousal is the brain equivalent of having too many tabs open, and processes start to get glitchy and shut down.”

“The idea is that maybe sexual arousal is the brain equivalent of having too many tabs open, and processes start to get glitchy and shut down.” —sexologist Jill McDevitt

Another study, published in 2017 in Current Sexual Health Reports, reports that there is a level of “functional connectivity” that happens between parts of the brain that impact your sense of clarity when your sexual response is activated. And according to a 2015 study published in the Handbook of Clinical Neurology, when sexually aroused, cerebral activations and inhibitions in the brain influence cognitive, motivational, emotional, and autonomic networks. So essentially, the brain is linked to the ways we navigate and control our sexual urges. Those brain signals can override our mental clarity when sex drive is high, and to varying degrees depending on the state of our mental health, relationship happiness, and other related psychological and biological factors.

And physiologically speaking, a spike in neurotransmitters adds even more fuel to the sex-brain fire by triggering an intrinsic reward system of sorts. When turned on, our bodies are flooded with stimulating phenylethylamine, “reward hormone” dopamine, and “feel-good cuddle hormone” oxytocin, Dr. Manly says, adding that our sexual behaviors follow similar principles associated with “wanting, liking, and satiety involved in the pleasure cycle of other rewards.” To this point, a 2012 study about the human sexual response cycle published in Progress in Neurobiology concludes that our brains “on sex” act similar to our brains when eating food and on sugar or drugs.

How to handle the ramifications of sex brain

The best way to conquer sex brain is to have conversations both with yourself and your partner(s) about how you intend to participate in sexual activity—but ahead of time, when your mind-set is in a much clearer state, says sex-positive psychotherapist Erica Zajac, LCSW. “We need to be able to discuss our wants, needs, desires, and boundaries well before we become sexually aroused and unable to make logical decisions,” she says. “Have discussions before heading into the bedroom, when good decision-making then becomes problematic at best.”

“Have discussions before heading into the bedroom, when good decision-making then becomes problematic at best.” —psychotherapist Erica Zajac, LCSW

There’s also a safety concern for discussing sex before anything actually happens, since sex brain highlights a risk of crossing boundaries. “Our intentions may be good, but if not specifically outlined, there may be very different outcomes than we anticipate due to our brain’s altered state. That does not mean we have an excuse to do whatever we want,” Zajac says, noting that consent is always the most important reality to uphold in any sexual scenario.

Lastly, avoid situations that allow your sex brain to make decisions in the place of the rational brain. If you have a friend-with-benefits whom you don’t want to hook up with anymore? Consider not hanging out with them if you predict that to be an inevitability. And keep contraception tools and whatever accessories you need for safe sex at the ready in your nightstand, the kitchen drawers, between couch seat cushions—wherever else you might need them at a moment’s notice. Do whatever you need in order to ensure a healthy, safe, consensual, and enjoyable sexual experience for everyone involved before you have to depend on your silly sex brain to do it all for you.

In the market for a new sex toy? Here’s the one a sex writer who’s tried, like, all of them would use forever. Plus, why you’re going to start hearing a lot more about genderless sex toys.